Lanka: moving towards a necessary balance 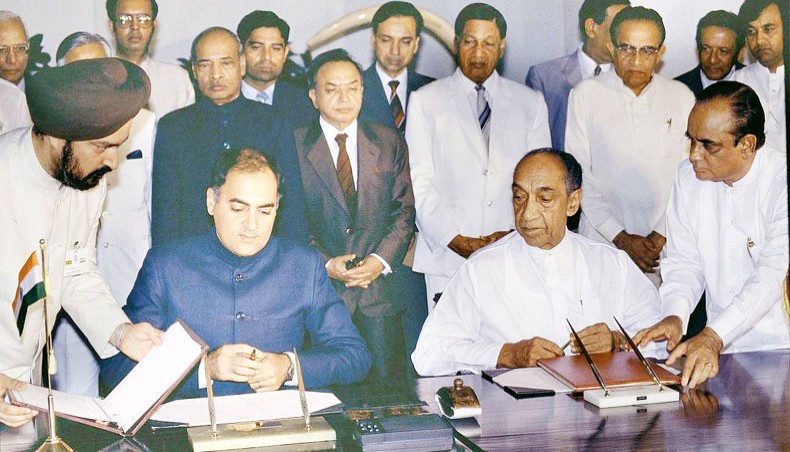 AS THE new year dawns the government appears to be moving in the direction of more inclusivity in both domestic and foreign policy. The most contentious domestic political issue over the past nine months, and growing in intensity to include public demonstrations, has been that of the disposal of bodies of persons who succumb to the coronavirus. The Sri Lankan claim to be exceptional in the world in respect of the practice of enforced cremation has been met with the opposition and increasingly public agitation of the Muslim community to whom burial is a matter of religious faith and is a human right guaranteed under the constitution and international law. Until recently the experts in the medical and scientific field consulted by the government and elevated to government committees were adamant in taking the position that burials should not be permitted on safety grounds.

The willingness of the government to go ahead for over nine months with a policy that has been challenged both on scientific and religious grounds both locally and internationally needs to be understood. The Muslim countries worldwide have joined hands to ask the Sri Lankan government to respect the right to burial. However, the proponents of cremation, both amongst the scientific community and general public, have a worldview that is centred around their own ethnic identity and its historical experiences. They see the need to assert their dominance or risk losing ground as occurred in the distant past. When these primordial fears are set in opposition to those of the ethnic and religious minorities who are vested with equal citizenship rights, and in addition are contrary to international practices, the outcome is bound to be contested, divisive and harmful to the country as a whole.

A more recently appointed expert committee appointed by the government on the issue of the disposal of bodies of COVID-19 infected persons has adopted a more pluralist perspective and recommended both cremation and burial as options. This will provide the government with a science-based rationale to change the present policy that has divided the country. It will be to the credit of the government that even as it moves towards accommodation within the country, it is moved to accommodation in the foreign policy sphere as well. The government’s ability to eschew polarisation in foreign policy can be seen in its ability to tide over the foreign exchange crisis by negotiating to raise $3.5 billion in currency swaps from China and India who are rivals on the international front as well as in relation to Sri Lanka where they have both been vying to take the first place. In recent years the Chinese presence has increased significantly in terms of economic enterprises operating within the country including the country’s ports.

WITH Sri Lanka being just 30 kilometres away from India and having overlapping territorial seas that can harbour security threats to itself, it can be expected that India would have concerns about Sri Lanka’s growing closeness and dependence on China for both economic and political sustenance. The Sri Lankan government would have no interest in taking sides in the rivalries of China and India and making itself part of a big power struggle by siding with one over the other. The decision to lease out the eastern terminal of Colombo port to an Indian-owned company which is in partnership with the Japanese government can assuage Indian concerns regarding China’s potential security threat to itself by giving them also a similar presence in the country’s ports. This is a positive action as India is not only physically close to Sri Lanka, but is also culturally close, which makes it the closest to Sri Lanka in more ways than one.

For the past three decades since the signing of the Indo-Lanka Peace Accord of 1987, India has sought to be a benefactor to Sri Lanka offering more and asking for less. The cynical actions of the Indian government in the early to mid-1980s, when it decided to train and arm the Tamil militancy that pushed the country into a protracted ethnic war will always be remembered in Sri Lanka. However, the Indian efforts to make amends need to be appreciated. During the final decade of the war, India gave its military and diplomatic support to overcome the LTTE threat. The amends that India has made comes in three important ways. The first is economic, in which India has emerged to be among the top three aid donors along with China and Japan. Indian economic support is wide-ranging including the construction of railways, providing housing for war victims, countrywide ambulance services and educational scholarships. India has also offered to sign a free trade agreement which Sri Lanka has not been prepared to accept so far due to the fear of being overwhelmed by much bigger and wealthy Indian economic enterprises.

The second area of India’s support has come in the form of political support in international forums, particularly those in which Sri Lanka is politically vulnerable due to its blemished human rights record due to wars and authoritarian rule when it was capable of doing much better. In the votes taken at the UN Human Rights Council, India invariably voted along with Sri Lanka in opposing international sanctions of any sort being imposed on Sri Lanka. Only once did it abstain from voting for either side in 2014. India’s support has been particularly helpful to Sri Lanka as it provides leadership to other developing countries which tend to look to India for guidance. The forthcoming session of the UNHRC in Geneva in March will be particularly important as the issue of the UNHRC resolution 30/1 of 2015 will be coming up, and the present Sri Lankan government’s unilateral withdrawal from commitments made by the previous government will be taken up.

THE third area of Indian support to Sri Lanka has been in regard to supporting a political solution to the ethnic conflict in the country that has dogged it since the time of independence and which successive government leaders have tried to bring to a conclusion. The current framework of devolution of power which is suited for ethnically and regionally diverse countries such as Sri Lanka is an outcome of the Indo-Lanka Peace Accord of 1987. It induced the Sri Lankan government to amend the constitution through the 13th amendment to establish provincial councils. This was a challenge that previous Sri Lankan leaders starting from SWRD Bandaranaike in 1957 to Dudley Senanayake in 1965 had attempted to do but failed. The early models of devolution of power, which those earlier generations of leaders proposed, would have given the ethnic minorities the power of limited self-government in the areas in which they are a majority. They were akin to asymmetrical devolution as they were not meant to be operational outside of the northern and eastern provinces.

It was India’s pledge to stop the ongoing war with the Liberation Tigers of Tamil Eelam by disarming it that prompted president JR Jayewardene to give the necessary political leadership to ensure that the 13th Amendment was passed into law. This constitutional amendment provided the framework for devolution of power on a uniform basis to the entire country rather than to the north and east alone on the principle of one country, one law, which the current president Gotabaya Rajapaksa champions. The provincial council system has been in operation for over three decades. Those who have been a part of the system and been chief ministers and government officials within them have expressed their belief that this system can be improved. The ethnic minorities too support the system of provincial councils but the ethnic majority and nationalist politicians are opposed to it.

The decision of the government to further postpone provincial council elections till the proposed new constitution is formulated is an indication that the present government or some of its leaders may wish to amend the provincial council system or eliminate it entirely. However, there are also other reasons that may have motivated the government to make this decision, including the widening COVID-19 infections and the expense involved in holding the elections which could be used for other urgent purposes. In any event, if the provincial council system is to be modified, abolished or replaced with another system of power sharing, this needs to be done with the concurrence of the ethnic minorities and not be unilaterally imposed on them. At a time when India is supportive of Sri Lanka, it needs also to be kept in mind that India lost the lives of over one thousand of its soldiers to implement the Indo-Lanka Peace Accord, and the former Indian prime minister Rajiv Gandhi, who was the co-architect of the accord, also lost his life as a result. Any change in the system of devolution of power needs to be a considered one.