Stretches of open space that make the mind 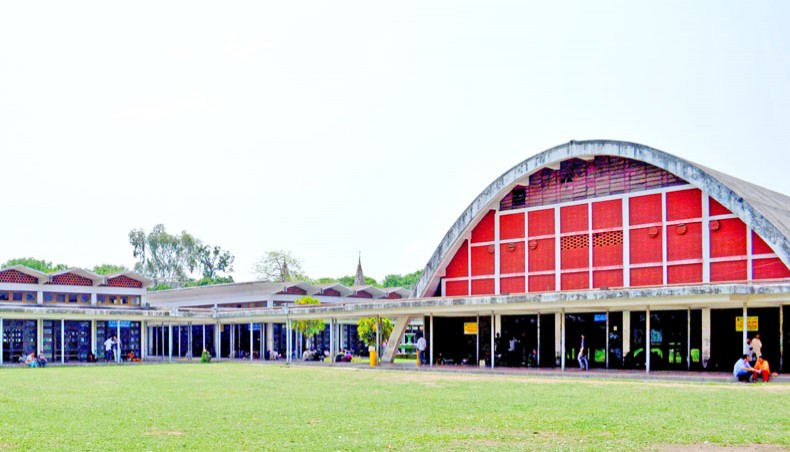 The inside of the Teacher-Student Centre. — Wikimedia Commons

A WALK straight into the Teacher-Student Centre up the farthest point — under the butterfly canopy, with the lawn and the cafeteria to the left and the fountain, the swimming pool left out of order for reasons never known, the auditorium with its parabolic vault roof, the rehearsal rooms and toilets to the right — would lead to a small room, in the left for some years and then in the right, hardly noticeable even standing at the edge of the verandah, that housed the university telephone exchange.

The telephone exchange of the University of Dhaka which is now digital and is housed in the registrar’s building was there when I entered the university in the late 1980s. A group of three to four people, sitting in front of a panel that had a few rotary dials, with the handsets hung on a raised, reclining board, and a few switches, ran the university telephone network and offered students venturing into the room to make calls within Dhaka free. The door to the room that hardly had the space for two people to cross without brushing against each other had always been ajar.

I had been introduced to the room and the way of making calls free a few days before I entered the university. The people who ran the room had never wanted to see our student’s identity cards. But I had not made more than a couple of calls in all the years the phone exchange had been there. Much later, well into my occupation of editing for a newspaper, I would ask people, the younger ones, some years off the university, if they knew of the phone exchange having been there. I have come across none who did. It gave me at least a reason to be proud that I stand witness to a time that many others have not known of.

As we started attending classes beginning in August 1989, the inside of the Teacher-Student Centre, the connected corridors built with steel columns that hardly stop people from overstepping their bounds was our editing place for a periodical of poems called Nadi, or the river, that we had printed at the Bangla Academy. We — a few have already shot to fame by now — sat down near the fountain, which would sometimes spurt water, and discussed the poems that we received for publication and proofread them.

I, mainly, used to proofread the magazine, coming out from the Linotype printing machines of the Bangla Academy. I befriended some wonderful people, some of whom I am still in touch with and some of whom I enjoy watching weaving stories of success around me, while correcting the proofs and occasionally asking the poets, the budding ones who are now in a wide range of professions from computer programmers to navy officers, about why some punctuation marks should behave the way they thought the grammar was to have ordained.

The cafeteria, which some of us liked to call café, à la français, perhaps because of a forged romanticism that often sounded full of affectation, has always provided the food, not of very high quality but good enough for students to survive hungry noons, and the sprawling space that formed an essential part of the university life. The place, especially, and the lush green lawn, which has a Greek structure, a cluster of graves in fact, standing in the east in solemn silence, and the raised corridors that allow students to sit singly, in pairs and in groups, reclining against the walls, have always provided for a great way of camaraderie — a great place to make friends with fellows, within the department and outside.

On occasions, some areas of the Teacher-Student Centre even provided for the arrangement of book sales at low prices, by the university authorities. On such an occasion, soon after we had started attending classes, in one farthest corner of the cafeteria, the university arranged for book sales at discount. This is where for the first time I bought a copy of Bangala Adab Ki Tareekh (A history of the Bangla literature), definitely the last, and perhaps also the first, book that the Dhaka University Press published in Urdu in 1957. I came to know of the book when I was in school.

A bird’s eye view of the Teacher-Student Centre shows that the centre was developed centring around green lawn, with the whole area divided almost equally by the passage, with the auditorium and the rehearsal rooms along with the swimming pool enclave, with the pool and two small temples of Shiva far behind, and the toilets to the right and the green lawn, bordering on the rooms for guests and the cafeteria to the left. But for the lawn, open spaces along both sides of the auditorium, between the pool and the main structure to the right, an open stretch up the farthest point, and a small, open square which apparently forms the backyard of the rooms for the guests — the space all around complement the large space what makes the mind and the environment for learning. Space plays within space, at different heights and in different directions at the place.

Greek architect and town planner Konstantinos Apostolou Doxiadis designed the centre, built in 1961. One of his best known town planning works is Islamabad, the capital of Pakistan, in 1960 which provisioned for low-cost expansion and growth without losing the human scale. Dhaka has another of his work close by — the National Academy for Educational Management, built in 1962.

The University of Dhaka campus has gradually lost the human scale as stretches of space that once made the mind have disappeared. The space between the Teacher-Student Centre and the Atomic Energy Commission, the space behind the Science Library, the space between the Sir AF Rahman Hall, which was a one-storey shed when we were students of the university, the beginning from across the road to the Sergeant Zahurul Haque Hall, the empty ground floor of the Lecture Theatre, the space between the original NIPA building and the International Hostel, which is now the PJ Hartog Hall, have all been lost in about three decades.

Some of the spaces have been filled with structures out of necessity that could be avoided or out of project benefits. The only open spaces left now are the mall, between the arts faculty building and the registrar’s building, the space to the south of the university library, the space in front and inside the Teacher-Student Centre and spaces around the Curzon Hall. The authorities earlier tried to erect a building to the south of the central library, but that could be foiled. A metro rail route through the campus, going by the library, the Teacher-Student Centre and the Curzon Hall, has already stood to threaten the campus environment.

Hundreds of students, who have attended the university since the 1960s, have memories of and association with the Teacher-Student Centre of their own, each forming a story and bond. But the university authorities have almost been into pulling down this place, which offers a world for all students who frequent here, for a multi-storey building, which could take place before the university completes it 100 years in June. The authorities appear to be ready to agree to the dismantling of the place, at the cost of the magnificence and freedom that the place promises the students. The association of the alumni may hardly have the will to step in to stop the plan.

The authorities in such a situation have solicited opinions, of current students and of teachers now on the stuff, online, about the dismantling of the old for the new. But the authorities have conveniently, and perhaps knowingly, forgot the former students and teachers, who could outweigh any decision the current students and teachers might make, leaving them to be outcast, denying them their share of opinions in the pride to be dismantled or not. The students who once walked down the campus as students and the teachers who were on the staff could have mounted pressure on the authorities against the development plan that would provide more space up from the earth, when space is needed along the earth, and bring in the associated regimentation but would disfigure history and leave a very large number of people weeping within.

The relationship between students-teachers and the centre is both physical and metaphysical. The authorities in pulling down the present structure and erecting, in the place, a multi-storey building that might look like a matchbox or matchboxes standing upright, may have the intention to attend to the physical relationship that the university may need, but the metaphysical relationship that exists between the students-teachers and the centre will be grievously left ignored.