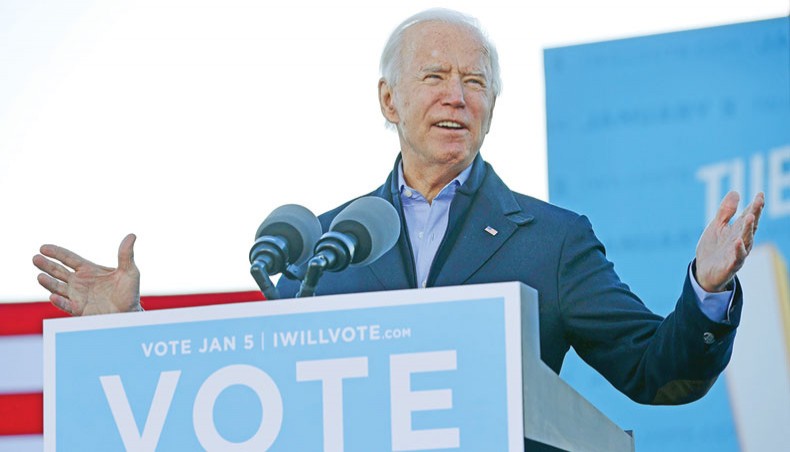 President-elect Joe Biden addresses a campaign rally with Democratic candidates for the US senate Jon Ossoff and Rev Raphael Warnock the day before their runoff election in the parking lot of Centre Parc Stadium on January 4 in Atlanta, Georgia. — Agence France-Presse/Getty Images/Chip Somodevilla

US PRESIDENT Trump’s phone call on January 2 to Brad Raffensperger, the Republican secretary of state of Georgia, has dwarfed the insane martial law option that he had earlier considered and then dropped. It has also dwarfed another senseless option his sycophants in Congress would be trying during the joint session of Congress on January 6 to upend the November 3 presidential elections that he has lost comprehensively.

Trump is aware of his zero per cent chances in the joint session in Congress also because the electoral votes that will be counted on January 6 were cast, counted, announced, signed and sealed state by state, live on national television when the Electoral College met on December 14 in the 50 state capitals and Washington DC. Vice-president Mike Pence in his constitutional role as president of the Senate will open the sealed envelopes and reconfirm the results that will tally 336 in favour of vice-president Joe Biden and 232 for president Trump, an outcome already known to all Americans.

The December 6 event will, therefore, be more of a formality than such an event has been in all the presidential elections in US history. The outcome of the joint session is, therefore, also indisputable. The objections that the president’s sycophants would be raising will only delay the inevitable outcome of the joint session, which is the formal announcement by vice-president Mike Pence that the president-elect Joe Biden will be the 46th president of the United States, by at the worst, a few hours.

The president, therefore, put his common sense and caution to the wind and with it the laws and the constitution in another super desperate attempt to remain in power by calling Brad Raffensperger. He threatened and bullied him and, even, cajoled, pleaded and begged that he should re-calculate the votes cast in Georgia on November 3that have been calculated three times already because of the objections of his lawyers. These recalculations found nothing that the elections were marked by any wrongdoing. The president, nevertheless, asked the secretary to calculate the votes once more, this time with those willing to, first, ‘find the 11,780 votes’ that he needs to win and, second, also to ensure that he wins. The secretary of state declined.

The mafia-style call lasted an hour. The secretary of state taped it as legally permitted in Georgia that soon found its way to all the national television stations following a provocative tweet by president Trump about the call accusing the secretary. According to Carl Bernstein who with Bob Woodward exposed president Nixon’s role in the Watergate Scandal, this call was far worse than president Nixon’s audiotape that forced him to resign after he had negotiated a pardon to avoid legal action. Trump through his phone call tried to, first, disenfranchise thousands of voters, second, change election results in his favour and, finally, interfere in the constitutional powers of the state over federal elections. His phone call is an impeachable offence in the opinion of most legal experts that is irrelevant nevertheless, because he has less than three weeks in office. His phone call may, however, have criminal contents that would be up to the Biden administration to pursue. The Democrats have meanwhile called for his resignation.

Paul Krugman, Nobel prize-winning Economist and opinion columnist of the New York Times, wrote a piece in the paper recently titled ‘Things Will Get Better. Seriously’ before Trump’s bombshell phone call exploded on the country’s explosive political scene. The article predicted that the next few months in the United States ‘will be hell’ in the context of the pandemic but that ‘things will get better at some point in 2021 and there are good reasons to believe that once the good news starts, the improvement in our conditions will be much faster and continue much longer than many people expect.’ His optimism, however, came with a caveat. He also predicted that the political scene will not get better, not even after the president departs.

The Nobel laureate’s prediction about politics came out of the Republican Party’s weakness to ‘keep demonstrating that they’re worse than you could possibly have imagined, even when you tried to take into account the fact that they’re worse than you could possibly have imagined.’ The Republican Party has proved Paul Krugman spot on with his prediction on the party. Except for a very few like Senators Mitt Romney and Ben Sasse, most other Republican senators have not uttered a word about the president’s outrageous phone call. To the contrary, a group of 12 senators led by senator Ted Cruz and 140 Republican House members will challenge the president-elect Joe Biden’s confirmation in the joint session on the 6th knowing they have no earthly chance or reason to succeed.

Trump, notwithstanding everything he is trying to remain in power, will join at noon on January 20 presidents Jimmy Carter, Bill Clinton, GW Bush and Barak Obama as a former president. He will, nevertheless, leave behind in the words of Paul Krugman the reality that ‘one of our two major political parties no longer accepts the legitimacy of the election it loses, which bodes ill for the fate of the Republic.’ It is incredible how president Trump caused such major deterioration in just one term in the mindset of the party of no other than Abraham Lincoln and the party that contributed so much to making the United States not just the world’s oldest democracy but also the leader of ‘the free world’.

There was a time not too long ago when US senators in the Republican Party with those in the Democratic Party meant such a great deal for their leadership to democracy worldwide. The present-day GOP senators have demonstrated that they are even worse as leaders than the leaders of the developing countries that their predecessors in the party had lectured, criticised and, in many cases, punished with economic sanctions upon their countries through the US government for actions they considered were in violations of democracy. The Republican senators are now indulging president Trump in actions that are the antithesis of democratic beliefs and principles.

The surreal, anti-democratic, fascist drama being enacted on Washington’s political stage, masterminded by Trump, is on course, nevertheless, to end with the inauguration of Joe Biden as the president on January 20. The damage that president Trump has inflicted on US politics will, however, linger because he has influenced the Republican Party not to accept defeat like third world political parties in pseudo-democratic political systems. The majority of the Republicans in Congress have acted by putting their interests ahead of that of the party and the country, no better no worse than many third world political parties and their leaders.

A period of great uncertainty, therefore, awaits US politics — a period that, in the words of Paul Krugman, ‘bodes ill for the Republic’. The Republican Party, whose historical role has been crucial for the success of the United States’s two-party democracy, must reinvent itself for the country to overcome the ill-bodings that have come its way primarily because of Trump’s four years in office. The Republican Party’s reinvention, nevertheless, may not be easy if Trump remains in politics. Republicans in Congress have demonstrated their lack of courage to stand against the toxic mix of president Trump and his cult-like followers which is not likely to weaken once he leaves the White House. In fact, the Republicans in Congress are as much to blame for ill-bodings the United States is facing now as the outgoing president Donald J Trump.

Postscript: All living former defence secretaries, 10 in all including former vice-president Dick Cheney and two having worked in the Trump administration, in a written statement, warned involving the military in election disputes. The statement has been issued as a red alert to the military. It underlines the fear that Trump may still cause grave harm to the country on his way out.

M Serajul Islam is a career ambassador. He writes from Maryland, USA.