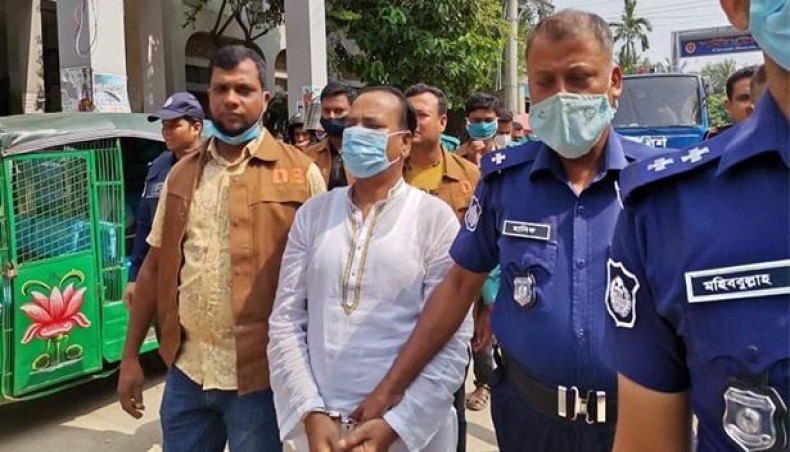 Nur Hossain, a convict of Narayanganj seven-murder, is seen on the premises of a Narayanganj court on Wednesday. — New Age Photo

A Narayanganj court on Wednesday awarded Nur Hossain, a convict of Narayanganj seven-murder, life term imprisonment in a case under Arms Act.

Nur Hossain was present at the courtroom when the verdict was announced.

According to the court sources, a murder case was filed against Nur Hossain with Fatullah model police station on April 26, 2014 in connection with the seven-murder.

The then Narayanganj deputy commissioner Anisur Rahman Miah cancelled the licenses of all the firearms in the name of Nur and his associates on May 5, 2014.

On August 1, 2014, the Railway Police recovered weapons, ammunition and goods from Malibagh Bazar rail crossing in Dhaka. Among those, Nur Hossain's revoked Non-Prohibited Bore pistol was found. On August 2, 2014 a case was filed under Arms Act with Railway police station.

On May 5, 2014 the licenses of Nur Hossain's two firearms were revoked.

On August 1, the NPB pistol between the two firearms was recovered by the Dhaka Railway Police from Malibagh Bazar rail crossing.