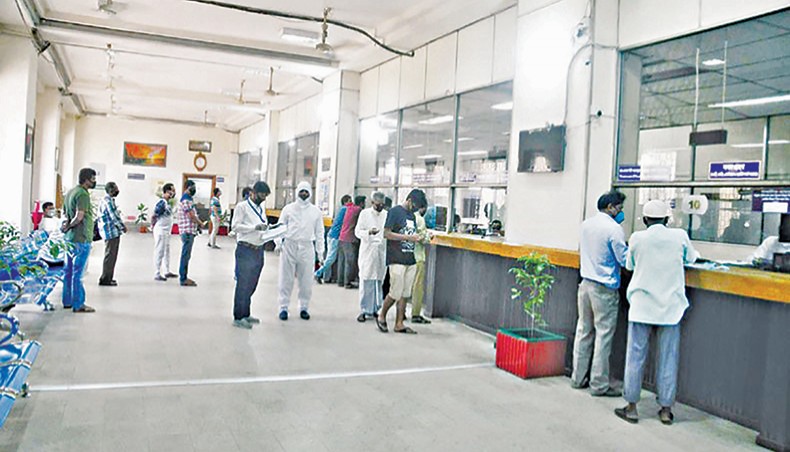 A file photo shows clients receiving services at a branch of a state-owned bank in the capital. — New Age photo

The Bangladesh Bank has initiated a move to scrutinise the need for extending the moratorium facility on loan repayment further by three months following requests made by businesses for the extension.

All business sectors enjoyed a moratorium facility against their unpaid loans for the entire year of 2020 against the backdrop of the COVID-19 outbreak.

Under the facility, borrowers would receive time extensions for loan instalments which they failed to repay in 2020.

To expedite the decision making process and to assess the actual loan repayment situation, the central bank asked the banks on December 31, 2020 to submit the December-end report on loan classification, provision and interest suspense accounts-related data 10 days before the usual reporting time.

Under the BB instruction, all schedule banks would get 15 days to submit the report to the BB instead of 25 days.

A senior official of the central bank told New Age on Monday that the BB, along with assessing the loan repayment situation, would also evaluate the actual economic situation.

While making the decision, the BB would try to evaluate whether the business entities have gained the capacity to repay the debt or not, he said.

Initially, the BB may extend the moratorium facility by three more months if it decides to extend the deadline.

Requests from the businesses, including the Federation of Bangladesh Chambers of Commerce and Industries, prompted the central bank to consider extending the deadline.

The BB official said that if the central bank decided to extend the moratorium facility, it would provide the facility to all sectors as otherwise, it would create a feeling of deprivation among people those would not be granted the facility.

The impact of the coronavirus outbreak was widespread, said the BB official, adding that the impact has been intense on some sectors and a little less severe on other sectors.

Given the context, there is no scope for the central bank to extend the facility for a particular group, he said.

He, however, said that the facility should be extended on the basis of need.

Sectors which are suffering or have suffered badly following the coronavirus outbreak may get time extension but the moratorium facility should not be issued to everyone, said the economist.

A number of bankers said that the moratorium facility for loan payment could be extended but the facility should not be given for all sectors on a wholesale basis but should instead be given for those sectors which had been suffering from the coronavirus fallout.

Following the issuance of the facility and the imposition of a ban on loan degradation, the volume of defaulted loans in the country’s banking sector dropped to Tk 94,440 crore at the end of September 2020 even after drastic falls in loan recovery throughout the year.