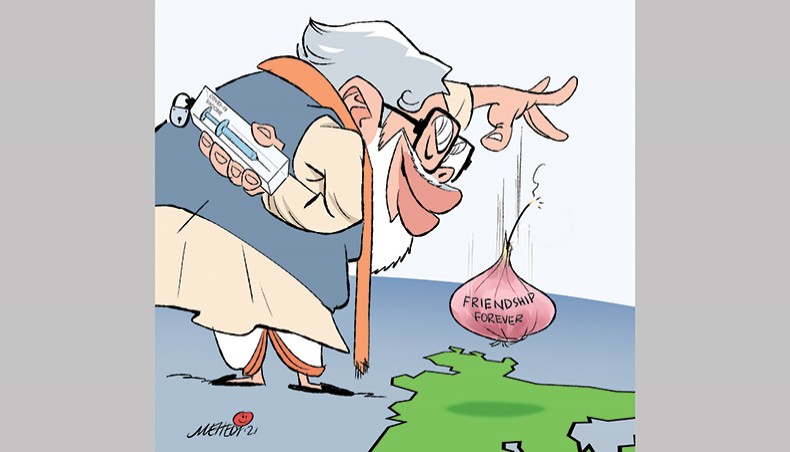 Uncertainty and confusion sprang up over the arrival of the Oxford University-developed COVID-19 vaccine in Bangladesh on Monday as the Indian government slapped a ban for several months on the export of the vaccine being manufactured by the Serum Institute of India.

The ban came at a time when Serum was set to export three crore doses of the vaccine to Bangladesh under a tripartite agreement with the country and local firm Beximco Pharmaceuticals Limited.

Serum CEO Adar Poonawalla on Sunday told The Associated Press that the vaccine was granted emergency authorisation by the Indian regulator on the condition that Serum Institute would not export it to ensure that vulnerable populations in India were protected.

‘We can only give [the vaccines] to the government of India at the moment,’ Poonawalla said.

The arrival of the vaccine’s first cache in Bangladesh was expected in late January or early February. But many doubted that the vaccine would be available here on time after the ban.

Both the Bangladesh government and Beximco, however, hoped that the ban would not hamper the deal and the COVID-19 vaccine would be duly available.

The Directorate General of Drug Administration later on the day issued approval for the import of the vaccine from India.

Health minister Zahid Maleque said at the Secretariat that they had the assurance from India that Bangladesh would receive the vaccine on time.

Beximco Pharma managing director Nazmul Hasan also hoped that Bangladesh would get the COVID-19 vaccine on time as per the deal with Serum.

As a result of the ban, the Serum CEO told the AP, the export of the vaccine for the COVAX — a global platform created by the World Health Organisation, the European Union and France to ensure an equitable access to COVID-19 vaccines, and supported by Gavi, the Vaccine Alliance, and the Coalition for Epidemic Preparedness Innovations — won’t begin until March or April.

As the news on the ban spread, Bangladesh health secretary Abdul Mannan on Monday in a press conference at the Secretariat said that the export ban would not affect the agreement with Bangladesh, after he discussed the matter with the deputy high commissioner of India in Bangladesh.

‘The Indian ban is meant for internal commercial release,’ he said, adding that the agreement with Bangladesh is a government-to-government agreement and an international deal and that it will not be affected by the ban.

Health minister Zahid Maleque told the press conference that the government was now inspecting a proposal for trial of a COVID-19 vaccine developed by a Chinese company.

‘We have other options, including the Chinese and Russian vaccines,’ he said.

He is not in a position now to say when the vaccine doses from Serum will arrive, he added.

‘The problem arose lately. We heard about it [the Indian ban on exports] today. We can’t tell you now the certain time when the vaccine will arrive. We need two to three more days to know the development,’ he said.

The minister, however, said that he hoped that there would be no problem in obtaining the vaccine from Serum.

‘We have trust in our friendly relation with India,’ the minister said.

The government on November 5 struck a contract with Serum to procure three crore doses of the Oxford COVID-19 vaccine for 1.5 crore people through its local vendor Beximco Pharma without any tender.

Speaking in an impromptu press conference, Beximco Pharma managing director Nazmul said that as per their agreement Serum would supply the vaccine within one month of its approval by the regulators in Bangladesh.

Nazmul further said that this was an international agreement, hoping for Serum to honour it, brushing aside the statement made by health secretary Abdul Mannan, who termed it a Government-to-Government agreement.

Beximco Pharma chief operating officer Rabbur Reza told New Age after the health secretary’s remarks that the agreement was in no way a government-to-government agreement rather a tripartite agreement between the Bangladesh government, Beximco Pharma and Serum Institute.

Rabbur said that they, too, had contacted Serum after the news spread over the export ban.

‘We’ve been assured that once Bangladesh’s regulatory body Directorate General of Drug Administration approves the vaccine, Serum would supply it within one month,’ he said.

Later in the evening, Rabbur said that they had applied to the Drug Administration for the approval for the Emergency Use Authorisation on the day and the approval process would take some time.

The DGDA, its spokesperson Ayub Hossain said, has given a no-objection certificate for importing the vaccine from Serum.

‘The vaccine can be used here as several top regulators in the world, including in the USA and the UK, have approved the vaccine,’ he said.

According to the tripartite contract signed by the health ministry for buying specified quantities of the vaccine, the government will pay $5 for each dose, including $4 as the price and $1 for carrying the vaccine in required temperature, at least one dollar higher than the price announced by AstraZeneca for each dose.

Serum will provide the vaccine to the Indian government at $2.74 each dose.

It will pay its local agent Beximco Pharma for carrying the vaccine doses from the former’s warehouse to the Bangladesh government’s warehouse as per the deal, said officials.

As part of the agreement, the Bangladesh government is required to pay half the total price before the arrival of the vaccines.

The health minister said that the ministry had kept $1.24 million ready for paying Serum, completing all the formalities.

‘We hope to pay Serum the amount in a day or two,’ he said.  All these developments over the matter of obtaining the COVID-19 vaccine from Serum Institute of India took place in a single day at a very fast pace.

Bangladesh earlier missed an opportunity to participate in a phase-3 trial of a COVID-19 vaccine developed by Chinese firm Sinovac.

As part of a deal with the ICDDR,B, which partnered with Sinovac for the trial, the trial was scheduled to begin in September and Sinovac agreed to provide Bangladesh with 1.10 lakh doses of the vaccine free of cost and a Bangladeshi firm was to get the technology for producing the vaccine locally.

But the government delayed the approval process, leaving Sinovac to go for other options.

Sinovac in late September sought co-funding from Bangladesh to begin the trial but the government declined to participate in it.

Indian export ban, experts said, means that Bangladesh will probably have to wait for a few months before receiving the first consignment.

Bangladesh contacted only India while the country has a big demand for COVID-19 vaccines, they said.

Gonoshasthaya Kendra founder Zafrullah Chowdhury said that it was an unwise decision to depend only on India for the vaccine.

It is not unusual for the Indian government to protect their people before exporting the vaccine to other countries, especially as they have relatively much high rates of COVID-19 infection and fatality, he observed.

‘But our government did not think about such a situation,’ he added.

It was also unwise for Bangladesh, Zafrullah went on, to refuse Sinovac when they proposed for vaccine trial.

‘We would have had priority in receiving the Chinese vaccine when it gets the World Health Organization approval,’ he said.

‘We should have opted for multiple options rather than depend on India only,’ said noted virologist Nazrul Islam.

‘We should also explore the new Chinese option,’ he added.

Nazrul, a former vice-chancellor of Bangabandhu Sheikh Mujib Medical University, said that the previous Chinese proposal for a vaccine trail, which received approval from the Bangladesh Medical Research Council, was rejected by the government in an ‘undignified’ manner.

‘We’ve lost the chance to form a partnership with China to get the vaccine on a priority basis,’ said Nazrul, also a member of the National Technical Advisory Committee on COVID-19.

The government should file a case against Serum for a breach of contract if it happens so, he advised.

‘They have assured us that we will get the stipulated vaccine doses in January, but they are now flouting the contract saying that they will provide us with the vaccine after meeting the Indian demand,’ he said.

Meanwhile, foreign minister AK Abdul Momen said with reference to communications from the Indian external affairs ministry that India would go by the commitment made at the highest political level to make the vaccine available to Bangladesh at the earliest opportunities.

‘The Indian Ministry of External Affairs has informed us that the bilateral agreement signed between us would be kept. They said that there might have been a ban involving the vaccine. But Bangladesh would get the vaccine first as the decision was made at the level of two prime ministers Sheikh Hasina and Narendra Modi. No ban will hamper this commitment,’ Momen said in a press briefing at the Foreign Service Academy.

Asked whether Bangladesh and India would get the vaccine simultaneously, he said, ‘They would uphold this commitment…The vaccine will reach us in time…They said that Bangladesh had no reasons to worry.’

‘The Indian external affairs ministry has also told us that the statement made by the chief executive officer of Serum Institute was premature and it was his personal statement,’ the minister said.

‘Prime minister Narendra Modi assured that the vaccine would be made available to Bangladesh as and when produced in India. Both the leaders also noted the ongoing bilateral collaboration between the private sector[s] in this area,’ according to Article 4 of the joint statement made by the two countries on the virtual summit between the two prime ministers on December 17.