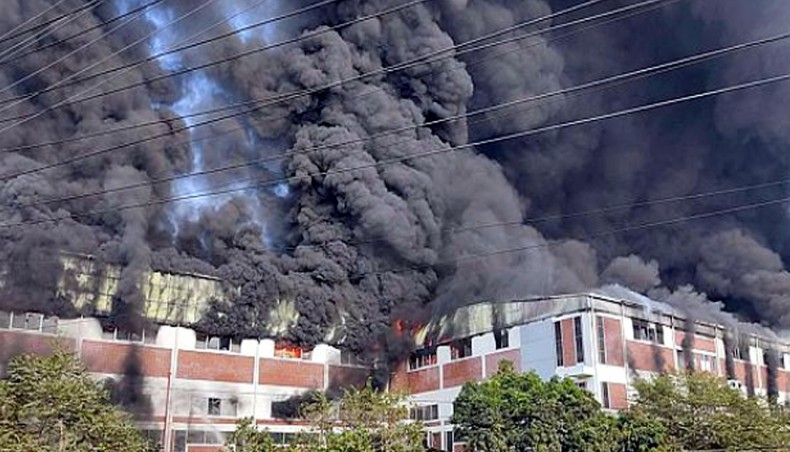 Huge plumes of smoke billow from the Konka electronic products factory at Sonargaon in Narayanganj after a fire engulfed the building on Sunday morning. — New Age photo

A fire on Sunday burnt the Konka refrigerator factory at Purana Tipurdi area under Sonargaon upazila in Narayanganj.

No casualty, however, was reported in the incident.

The fire broke out on the second floor of the three-storied factory building of Konka brand refrigerator of Electro Mart at about 10:45 am, officials at Narayanganj Fire Service and Civil Defence said.

The fire was brought under control at about 3:15 pm with efforts of 12 firefighting units, they said.

Locals said that the fire broke out on the 2nd floor sometimes after the workers joined their work in the morning and it spread to other floors immediately.

Fire service’s Narayanganj deputy director Abdullah Al Arefeen said that the fire spread to the building as there were huge inflammable substances in the factory.

On hearing the information, they immediately rushed to the spot and brought the fire under control, he said.

He, however, could not say how the fire had originated.

The fire damaged most of the machinery and raw materials in the factory and all the glasses of the building were damaged due to high temperature, he said.