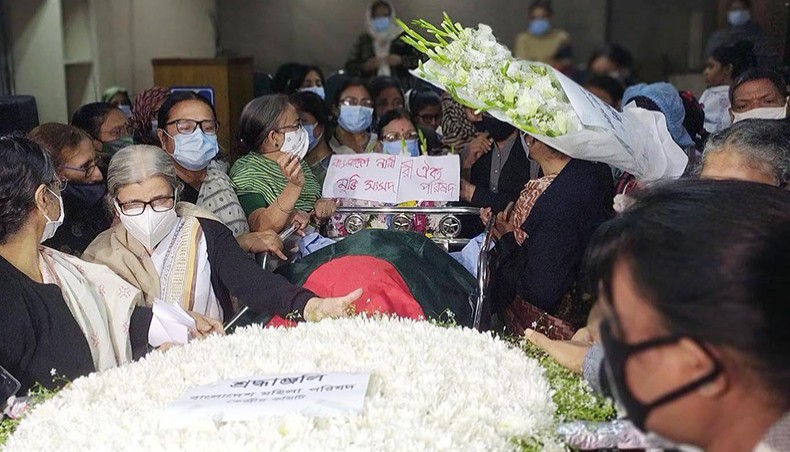 Mourners place wreaths at the coffin of Bangladesh Mahila Parishad president Ayesha Khanam at the Parishad office at Segunbagicha in Dhaka on Saturday. — New Age photo

The women’s rights activist was 74.

Mahila Parishad acting president Fauzia Moslem told New Age that Ayesha breathed her last at her Dhanmondi house at about 3:30am.

‘Ayesha was suffering from cancer,’ she said.

Ayesha had served as the president of Mahila Parishad, a women’s rights organisation, since 2008.

She was buried in her home district Netrakona, said Fauzia.

She was an organiser of the country’s several movements namely the 1962 student movement, the 1969 Mass Uprising and the 1971 War of Independence.

Ayesha joined Mahila Parishad in 1972 and participated in many international events, including UNSCAP, IWRAW, UNIFEM, on behalf of Bangladeshi women.

Different socio-political and cultural organisations and members of the cabinet also expressed deep condolence over her death.

Dhaka University vice-chancellor Md Akteruzzaman mourned the death of Ayesha, a former student of the university.

She was a student leader of Dhaka University during liberation war.