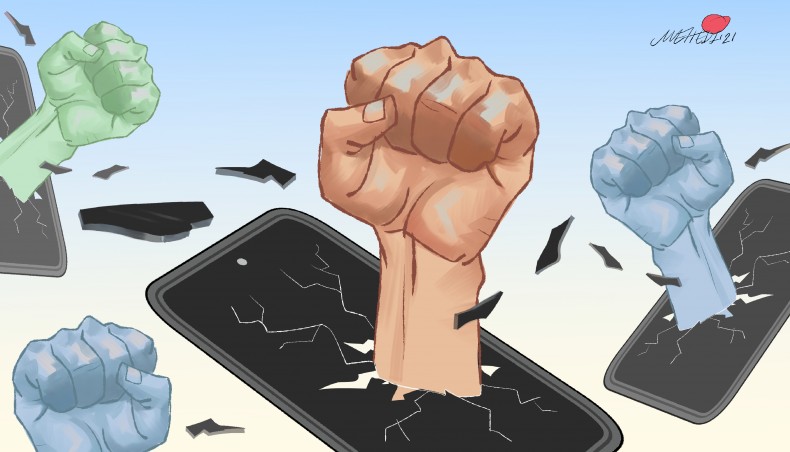 The second decade of the twenty-first century has just passed. It was a decade which added to the archive of human experience worth more than a century, probably more than a millennium. It was a decade of massive transition for the youth of Bangladesh. They have adopted technology and subsequent transformations in their lives, Md Mashiur Rahaman reviews a crucial incident from each year of the decade

FOR Bangladesh, the decade is important as it was a decade when the internet entered the very core of society and injected both positive and negative changes. These changes are not just comparable with any other positive-negative binary. These changes are huge, massive, and unthinkable.

It was like a dream, a dream which is, quite oxymoronically, a sweet nightmare, and Bangladesh is yet to get up and recollect what just happened to her.

BANGLADESH started the decade with the dead body of Felani Khatun hanging from the barbed wire put on there by Indian Border Security Forces on the Bangladesh-India border. Felani Khatun was killed for trespassing into the Indian land to search her cattle.

This incident instigated mass discontent and the hanging body of Felani on barbed wire has transformed into a symbol of regular incidents of border killing. In 2011, Bangladesh had also managed to come up with a solution for the border demarcation dispute with India, and both the countries signed a treaty to exchange enclaves and simplify international border. It was great news for the people living on the enclaves, as for the last seventy years they were struggling for their rights and identity.

But the youth of Bangladesh was not that much involved in the discussion of these incidents back then. The urban middle and upper-middle-class youth were busy to discover the wonders of the internet and others were on their way.

It was a time when there were many cyber cafes in the big cities, and the youth population of Bangladesh has started to spend hours after hours there, sometimes for something important, sometimes only to check social media notifications.

IN 2012, the journalist-couple Sagar Sarowar and Meherun Runi were brutally killed and the case is yet to be resolved. It has been an incident that has haunted the media industry and the journalists working in it throughout the decade. People from all walks of life have been demanding justice for them.

Another incident at Tazreen Fashion Factory, located in Ashulia, was particularly disturbing. On November 24 fire broke out and at least 117 people were burnt to death. Justice for this incident is also yet to be served.

Another couple of murders, one in Jahangirnagar University and another in Jagannath University, have also shaken the country. Zubayer Ahmed of JU was killed for political rivalry and at JnU Bangladesh Chhatra League activists hacked Biswajit Das to death, in front of media cameras.

Court has given a verdict on both the cases, but the accused are yet to be served their designated punishment.

IT WAS a year of protests in Bangladesh. On February 5 of this year, people started to protest in Shahbag, Dhaka demanding capital punishment for the war criminal Abdul Quader Mollah, and afterwards, the protest spread all around the country. The youth of Bangladesh has greatly involved in the movement and the impact of the incidents happened during and afterwards this mass protest is yet to be analysed. It has been the largest mass resistance of the decade.

In 2013, Bangladesh also experienced the collapse of Rana Plaza, a building which had accommodated a market and several garment factories in it. More than 1175 people were killed, and many were heavily injured marking still carrying the woes making it one of the worst industrial disasters in recent history. Justice is yet to be served for the incident.

IN 2014, the prime minister of Bangladesh Sheikh Hasina got re-elected for second consecutive term amidst mass and political protests. Bangladesh nationalist Party did not take part in the elections and called for an indefinite strike all across the country. The party is being accused of perpetrating violence on commoners including burning down packed public transports.

The young generation of Bangladesh has become highly disinterested in political movements especially called by the BNP after these incidents.

THE students of the private universities had long been understood as the group of students who are not at all interested in politics, movement, or anything that concerns protest. 2015 has changed this idea. This year Bangladesh has experienced a mass protest from the private university students protesting a decision of the government of putting vat on education.

The NO VAT movement was successful as the government changed its plan to impose VAT on the tuition fees.

SOHAGI Jahan Tonu, a student of Comilla Victoria College was raped and murdered in Comilla Cantonment in March 2016. Anti-rape protests erupted following the incident across the country, and people started to demand firm laws and justice delivery system for rape cases. From 2016 the demand for justice has become permanent political rhetoric in Bangladesh.

BANGLADESH has been dealing with the Rohingya refugee crisis from long since, but in 2017 the country had to accommodate the largest inflow of the Rohingya refugees. The crisis has changed the demographic and geographic scenario of Cox’s Bazar, one of the greatest tourist attractions in the country. Bangladesh has been praised in the international arena for its humanitarian response to the crisis.

ROAD Safety Movement is the highlight of 2018. School going students took over the streets of Dhaka when a rashly driven bus killed two students on the airport road. The protesters demanded a safe and well-maintained road transport system. The movement resulted in a firm law regarding transportation sector, though discipline in the roads is yet to be established.

AFTER 28 years, the students of Dhaka University got the chance to elect their representatives in the Dhaka University Central Students’ Union. Students’ organisations and concerned citizens have been demanding for the DUCSU election from long since as the platform is considered vital to produce future leaders of the country.

Though the election result was disputed and several organisations have boycotted the election, yet it was taken positively by many as a breakthrough from the stagnant DUCSU.

A LOT of things happened in 2020, but nothing is bigger than the COVID-19 pandemic. The pandemic has impacted the people from all walks of life and very social, political, economic, religious institutions.

2020 has transformed our collective thinking pattern. It has taken loved ones from many. It has made many jobs vanished from the economy. And the pandemic is not over yet, and no one knows how the world will look like when the pandemic will finally be over.

Bangladesh is the country where more than six hundred thousands of youths are working as IT freelancer, the largest group of IT freelancers in the world. The people of Bangladesh are using mobile banking service which has made banking easier than ever.

Students are attending the classes online amidst this pandemic despite many drawbacks which reduced the loss by many times. Youths are using and creating internet contents, promoting knowledge and sanity and changing the country.

And the last sentence of the last paragraph can be reversed. Youths are using and creating internet contents, promoting misinformation and insanity that is creating a lot of problems in the country. Over the decade many fatal incidents like mob lynching, communal riot, burning of the houses of the minorities happened which were instigated by the misinformation spread through the social media platforms like Facebook and YouTube.

But the good thing is people are talking about these things. Gradually people are becoming conscious about using the internet, and the youths are pioneering the campaigns to promote critical thinking among the people. So, the rays of hope are there.

Hopefully, the next decade will bring the betterment for everyone.