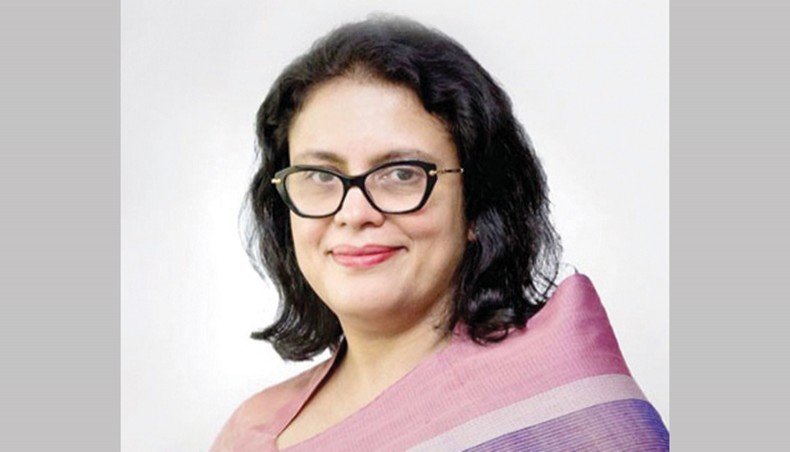 Global brands and buyers have adopted an unfriendly approach towards the apparel exporters of Bangladesh amid the coronavirus pandemic that hit the readymade garment sector and its workers hard, Bangladesh Garment Manufacturers and Exporters Association president Rubana Huq said.

‘Western buyers have apparently shown their real faces amid the COVID-19 spread. Faced with economic uncertainty, they basically tried to shift the burden to us,’ the BGMEA president said in an exclusive interview with New Age on Sunday.

‘The 2020 was a year of fear and anxiety. With the losses suffered from the cancellation of 3.18 billion dollar worth of orders and the daily demand for discounts, the nightmares that continued due to the deferment of shipment, payments and the endless discussions becoming a part of the routine of the apparel exporters looking for solutions, the industry went through an ordeal,’ she said.

Rubana, also managing director of Mohammadi Group, said that brands had suffered, but exporters had suffered more as buyers did not even consider the fact that they had been doing business with suppliers for a long time.

‘The 4.1 million people engaged in the sector faced uncertainty. Entrepreneurs who had built their factories with the hope of expansion and growth, faced an unknown future,’ she said.

Eventually, when the brands considered reinstating orders and about 90 per cent of the orders were reinstated, exporters still had to face back-to-back liabilities of $1.96 billion which remained unpaid because either the buyers did not pay or they went bankrupt, the BGMEA president said.

‘Bangladesh has a lot of green factories but we don’t have green prices. Bangladesh has many practices which are not acknowledged by brands and buyers…We need to own up to our own good practices,’ she said.

The BGMEA president emphasised the need for regional cooperation, which she thought was essential to remain competitive in the world market. ‘We need regional collaboration on manmade fibre-based textile,’ she added.

‘For instance, in Bangladesh we are still stuck with cotton-based textile production, whereas the entire world has gone the other way. The rest of the world is now focused on manmade fibre-based textiles. And this is important for us to realise,’ she said.

Expressing fear over the second wave of COVID-19, the BGMEA president said that the growth of RMG from January to November posted 17.64 per cent negative growth as the second wave pushed the sector back by multiple folds.

‘The challenges that we face today are the uncertainties regarding the placement of orders by the buyers, the challenges of obtaining working capital for the small and mid-size enterprises, the bankruptcies of brands and lack of protection at our end and the deferred payments and discounts,’ Rubana said.

She said that the situation worsened due to the dip in the consumer index this year as consumption in Europe had dropped by 13 per cent and in the US by 16 per cent in November and Bangladeshi RMG products suffered a decline in price by 5.19 per cent.

The BGMEA president once again demanded a fresh stimulus package from the government to pay wages of workers for four more months.

‘Had the prime minister not announced the stimulus packages in March, the majority of the factories would have faced closure. Had the bureaucrats not supported the private sector, we would have been in dire straits. At this point of time, we would need a fresh wage support package for four months starting from January 2021 at 2 per cent service charge with a payback period of 60 months and a moratorium of 12 months,’ she said.

At the same time the extension of the current package tenure to 5 years and an extension of moratorium up to 12 months would be of immense help to the sector, Rubana pointed out.

She said that at present many people very often question and say why an industry of 40 years would not have the capacity to pay wages to workers for one month.

‘The industry pays $423 million per month as wages and a temporary support would revive the industry and take it to a far superior platform. This thrust to diversify products, recycling and value addition would prepare the industry for the 4th industrial revolution and, in the process, help address the skills gap in the sector,’ the BGMEA president said.

Bangladesh is going to graduate from LDC status and after graduation, the double transformation would come into play, which means the country would need a backward linkage industry, Rubana said.

The long-term visions should include investing in MMF-based backward linkage facilities and in the short-term, right now, the sector needs to consolidate its business, she said.

‘We need to restructure and be more efficient because there are a lot of leakages in how we operate,’ the BGMEA president said.

Rubana claimed that before the pandemic, 2,282 factories were running under BGMEA membership. After the closure of 317 factories, 1,965 are now running.

As per the BGMEA database, about 76,000 workers lost their jobs and approximately 40 per cent went back to their former employment. The number of jobless workers is declining every day, she said.

The BGMEA president urged all the stakeholders, including the government, to develop an unemployment protection scheme for the workers.