One dead in Norway landslide 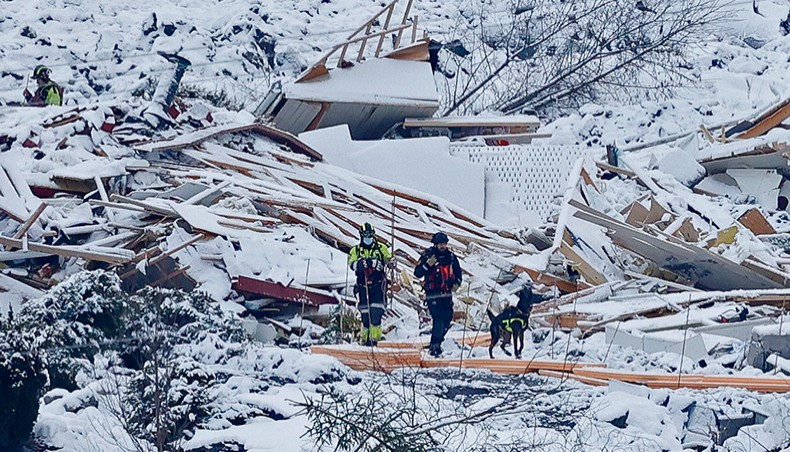 Rescue workers with a dog search the area on Saturday following the landslide that hit a residential area in Ask in Gjerdrum during Christmas. — AFP photo

Rescuers on Friday found a dead body and continued searching for nine other people, including a toddler and a 13-year-old, still missing days after a mudslide destroyed homes in a Norwegian village, the authorities said.

An entire hillside collapsed in Ask, 25 kilometres northeast of the capital Oslo overnight Tuesday, burying homes or breaking them apart.

‘A dead body was discovered in the landslide,’ police said without identifying the person.

The police statement said the discovery was made around 2:30 pm Friday as Norwegian crews supported by colleagues from Sweden continued search operations in the snow-covered terrain.

The police published the names of the ten people subject to the days-long search. Eight are adults, one is two years old and the last is 13 years old.

Norwegian media reported that a medical helicopter and ambulances were at the scene.

The authorities have banned all aircraft from the disaster area until 3 pm on Monday as they conduct aerial searches.

‘We still think we can find survivors in the landslide zone,’ a rescue worker told TV2.

‘The fact that a discovery was made suggests to us that we are in an area where there may be people,’ the official said.

Local mayor Anders Østensen told TV2 he was trying to keep his hopes up.

‘I choose to listen to the police when they say that the current operation is a rescue operation,’ the mayor said. ‘We want to have hope but we see very well what the site looks like.’

Homes were buried under mud, others cut in two and some houses left teetering over a crater caused by the mudslide, with several falling over the edge.

The Norwegian Water Resources and Energy Directorate said the disaster was a ‘quick clay slide’ of approximately 300 by 800 metres.

Quick clay is a sort of clay found in Norway and Sweden that can collapse and turn to fluid when overstressed.

Police said 10 people had been injured including one seriously who was transferred to Oslo for treatment.

One-fifth of the 5,000 strong population of the municipality of Gjerdum that includes Ask have been evacuated from the area as the ground was deemed unstable.

Prime minister Erna Solberg visited the village on Wednesday and described the landslide as ‘one of the largest’ the country had seen.

‘It’s a dramatic experience to be here,’ Solberg told reporters.