Trump turns to Stalin to hang to power 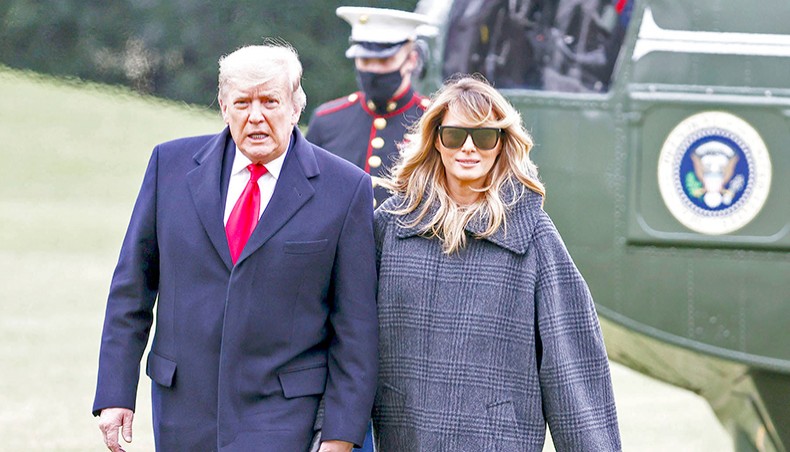 US president Donald Trump and First Lady Melania Trump depart Marine One on the South Lawn of the White House on December 31 in Washington, DC. — Agence France-Presse/Getty Images/Tasos Katopodis

US PRESIDENT Donald Trump’s electoral, legal and constitutional options to upend the November 3 elections have all but run out, almost. What remains for his final exit is a mere constitutional formality. The two houses of Congress will now meet on January 6 presided by vice-president Mike Pence to count the votes of the electoral college elections that were held in the capitals of the 50 states and Washington DC on December 14.

The January 6 event will be a constitutional requirement. It has been held as fait accompli in all the presidential elections before the present one in 233 years’ history of the United States. The event simply counts the electoral college votes that are cast weeks before on the constitutionally mandated first Monday after the second Wednesday of December. This year the elections of the electoral colleges were different from all past elections. These elections were televised and duly certified live on national television for Americans and the rest of the world to watch because of the false claims of President Trump that the November 3 elections were marked by rigging, voter fraud and conspiracies.

Therefore, the January 6 event should be nothing else than a formal count of the electoral college votes and a formal announcement by the vice-president that Joe Biden would be the 46th president at noon on January 20. Donald Trump is, however, desperate and willing to do anything for another term, even the utterly absurd. He has now turned to even a more bizarre path than the martial law that he had considered briefly that was stillborn to upend his electoral defeat. He has now turned to Joseph Stalin and a grotesque quote from him to stay in power. Stalin said that ‘those who cast the votes decide nothing; those who count it decide everything.’

Louie Gohmert, a Republican Congressman from Texas, has filed a case in the federal court for a ruling to pursue Stalin’s outrageous quote to please president Trump. He wants the court to direct Mike Pence to invalidate the president-elect Joe Biden’s victory in the six swing states of Pennsylvania, Michigan, Wisconsin, Georgia, Arizona and Nevada. He further wants the court to give Mike Pence the authority to give the president-elect’s slates of electoral college votes in these states to president Trump to give him a second term while performing his constitutional role of counting the electoral college votes in the joint session of Congress on January 6.

Congressman Louie Gohmert’s case will, no doubt, be trashed by the court because it is much worse than the many dozens of the president’s other cases trashed and dismissed by the federal courts and the US Supreme Court. The Congressman supported by Republican Senator Josh Hawley and backed by 140 House Republicans and a few Republican senators will, nevertheless, pursue the court case in the joint session on January 6 being aware that it would go nowhere. The House Republicans have agreed to back Congressman Gohmert in a huge number because they fear that, otherwise, the president could harm their prospects or his base could turn against them for angering the president that they love when they face elections in 2022.

The majority of the Republican senators are not backing Congressman Gohmert because their term is for six years unlike that of the members of the house that is for two years. Most of the Republican senators would not face elections in 2022. They have, therefore, fewer reasons to be afraid of the president. The majority of Republican senators have, therefore, chosen to stand behind Senator McConnell who has opposed Congressman Gohmert’s because it would force the party to choose between upsetting the ‘most popular politician in the party, Donald Trump, and undermining democracy.’ The president is also encouraging his supporters, in particular the white supremacist groups, to gather in Washington DC on January 6 to disrupt the counting of electoral votes in the congress.

Trump has spent a good part of his soon-to-end term as president tweeting insults against his political opponents and anyone else he disliked. His most favoured insult has been to call them ‘losers’. He is now on course to becoming the greatest loser in US history. He lost the presidential election comprehensively on November 3, 336 to 232. He was a loser again on December 14 when the electoral colleges reconfirmed his 336–232 loss on electoral votes and to boot that, a seven million plus loss on popular votes. He also lost many dozens of cases in the federal courts and the US Supreme Court while pursuing the false narrative that the elections were ‘stolen’ from him by rigging, fraudulent means and conspiracies. And he is now on course to lose again on January 6 when ironically his loss of the White House would be announced by his vice-president.

Georgia will hold two run-off elections for the US senate on January 5. Some Republicans feel that the president is sabotaging the elections to punish the state’s Republican governor and his supporters for not overturning the November 3 elections in his favour. The conflict between the president and a section of Georgia’s Republicans have placed into jeopardy the chances of the two Republican senators who are trying to retain their seats and under normal circumstances should win re-election easily. If they both lose, the Republicans will lose their control of the senate. Meanwhile, senator Mitch McConnel and senior Republican leaders are distancing from the president. The president is likely to see losing their support at the January 6 event in the Congress. Senator McConnel has already stopped the $2,000 COVID-19 aid bill that the president has demanded and ironically that the Democrat-controlled House has passed.

Donald Trump is, thus, on course to becoming the biggest loser in US history. Yet long after he leaves as the most unsuccessful president in US history, the fact will remain that 74 million people voted for him, many of whom prepared to die for him. There will be many unanswered questions that will be discussed and debated for a very long time after he leaves the White House. What if he had been truthful to Americans and led the country by telling them that COVID-19 was extremely contagious and deadly, a fact he knew as early as the end of January? Would he then have succeeded in saving the lives of many of the hundreds of thousands of Americans that perished and, thereby, earned the support of many that did not belong to his base and won a second term?

Donald Trump ran an administration from the very first day he entered the White House believing that the law and the constitution were there to serve him and not the other way around. He has learnt the hard way that his powers over a US presidential election in which he has been a candidate himself are the same as that of any US voter, limited by the constitution, federal and state electoral laws, limited simply to casting his own vote.

Postscript: President Trump’s new year’s message revealed a great deal more about him. He claimed credit for saving the lives of millions of Americans; for the development of the vaccines, et cetera, et cetera. He did not have a single word for the 3,40,000 Americans who have died and the 19 million who have been infected with COVID-19 with both counts mounting exponentially leaving many asking who had/has less empathy as a human being — Emperor Nero or President Donald Trump.

M Serajul Islam is a former career Ambassador. He writes from Maryland, USA.