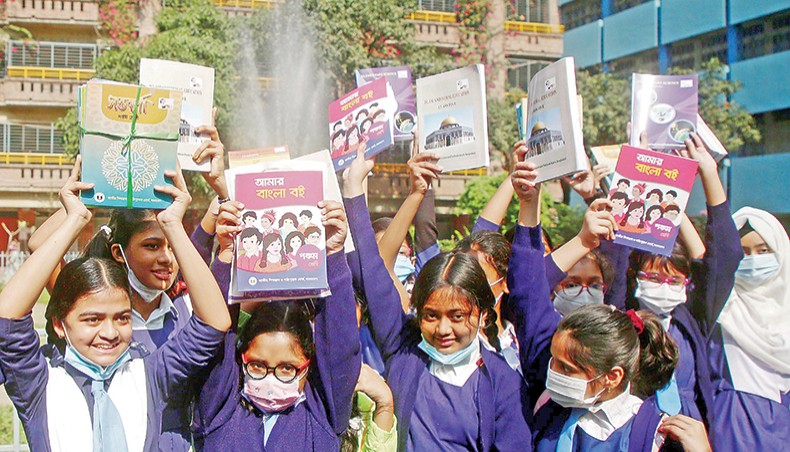 Students hold up new books they received on the first day of the year at Willes Little Flower School at Kakrail in Dhaka on Friday. — Sony Ramany

Like the previous years, textbook distribution started on Friday among the students from class sixth to nine on the first day of the New Year.

Prime minister Sheikh Hasina already inaugurated the free textbook distribution through a videoconferencing from her official residence Ganabhaban on Thursday.

The book distribution ceremony was held at Bangabandhu International Conference Center in the capital.

Despite the coronavirus pandemic, the government has already taken all-out measures to distribute new textbooks among 4.5 crore students of the primary and secondary levels free of cost on the first day of the New Year.

The textbook this year however will not be distributed by holding book festivals like every year due to the coronavirus.

The books will be handed over among the students at their respective educational institutions in 12 days to avoid any kind of gathering.

Earlier, chairman of the National Curriculum and Textbook Board Professor Narayan Chandra Saha said that generally, prime minister Sheikh Hasina inaugurates the book festival by handing over new books to students at Ganabhaban every year.

‘But this time, the premier will formally inaugurate the textbook distribution through a videoconferencing from Ganabhaban on December 31, 2020 due to COVID-19 pandemic,’ he said.

Later, the books will be distributed among the students in educational institutions across the country on the next day (January 1, 2021), Professor Saha added.

On the occasion of the ‘Mujib Year’, novelty has been brought on the cover of the books this time, he said.

Still images of the country’s Sheikh Mujibur Rahman, Independence, Liberation War, Language Movement and various development projects of the present government have been printed with captions on the back page of the textbooks, he continued.

The books have already been reached to the schools across the country, he said.

Pre-primary books, Braille method books and books for ethnic students have also been printed, he added.

According to the ministry of primary and mass education, the demand of textbooks for primary students in 2021 is 10 crore 25 lakh 82 thousand and 555.

2,13,288 books printed in special language will be distributed to 94,275 ethnic students (Chakma, Marma, Tripura, Garo and Sadri) from pre-primary to third grade and the books have been printed in five languages.

This time Braille books will be distributed to 9,196 visually impaired students.

According to the ministry of education, in the academic year of 2021, 24 crore 33 lakh 34 thousand copies of books will be printed for the secondary level students.

Directorate of Secondary and Higher Education director general Syed Md Golam Faruk said that educational institutions across the country have been closed since March, 2020 due to the coronavirus to ensure the safety of the students.

‘We are trying to reach new books to students across the country on time in spite of corona situation,’ he said.

He urged the teachers, students and parents to follow the hygiene rules while distributing books in the educational institutions amid the pandemic.

The director general said, ‘We will try to ensure that the students can continue their education smoothly from the beginning of the next year (2021)’.

Once they get new books, they can study according to their curriculum, he added.

Awami League government has been celebrating ‘book festival’ on January 1 every year in a festive atmosphere since 2010 with the aim of elevating education standard and preventing dropout rates.

In the last ten years since 2010, about 331.47 crore primary and secondary books have been distributed across the country.