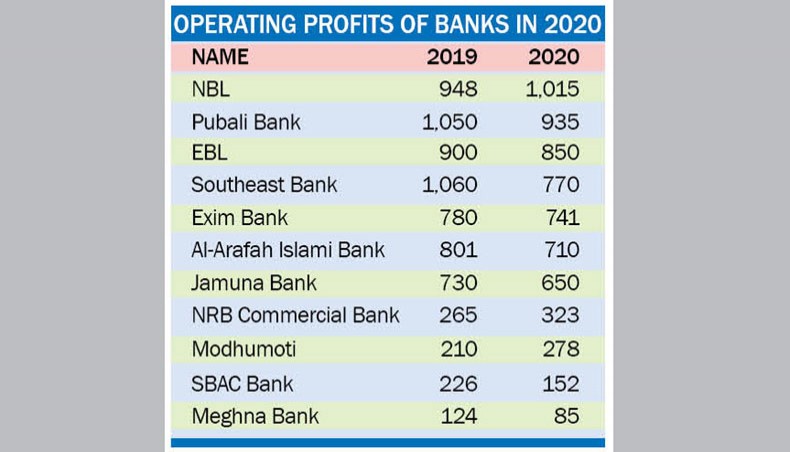 Most of the banks posted lower operating profits in the just concluded year 2020 as the implementation of single-digit lending rate plunged the banks’ profitability and the COVID-19 outbreak in the country lowered the disbursement and recovery of loans.

The banks which had a higher exposure to the retail segment of financing suffered the most in the immediate past calendar year.

Trust Bank managing director and chief executive officer Faruq Mainuddin Ahmed told New Age, ‘Even though the annual operating profit figure is yet to be finalised, our (Trust Bank) operating profits in the year 2020 would be higher than the operating profits we attained in the previous year due mainly to our less exposure to the retail segment of financing.’

Earnings of banks from the retail segment affected the most in 2020 after the implementation of a 9-per cent ceiling on lending rate, he said.

The 9-per cent ceiling on lending rate came into force on April 1, 2020 following an instruction from the government.

The implementation of the rate was the major reason for the drastic fall in operating profits in the year as many banks had to pay higher interest against the deposits in the first half of the fiscal year, lowering their profit margin.

Bankers said that the majority of the banks might fail to sustain their profits after taxes (net profits) as the entities have been asked to keep additional one percentage points provision against their unclassified loans for 2020.

Banks have been instructed to keep additional provision to minimise risks as the banks were asked not to degrade loans for the borrowers’ non-payment in the year 2020.

The outbreak of coronavirus-induced economic shocks have also resulted in a sharp decline in credit demand as businesses are shaky in making fresh investments decision or to expand their business, bankers said.

The country’s economic activities also came to a halt during the two-month countrywide shutdown, leaving the existence of many businesses at stake.

The country’s economic activities improved gradually in the second half of the year but were hindered by the outbreak of the second wave of coronavirus in the last couple of months in the country’s export destinations.

The plunge in the private sector growth to 8.21 per cent in November was a testament to the dismal business situation in the country.

Due to the coronavirus-induced dismal business environment, the Bangladesh Bank announced loan repayment exemption to the borrowers until December 31, 2020, leaving the loan recovery of the banks almost suspended.