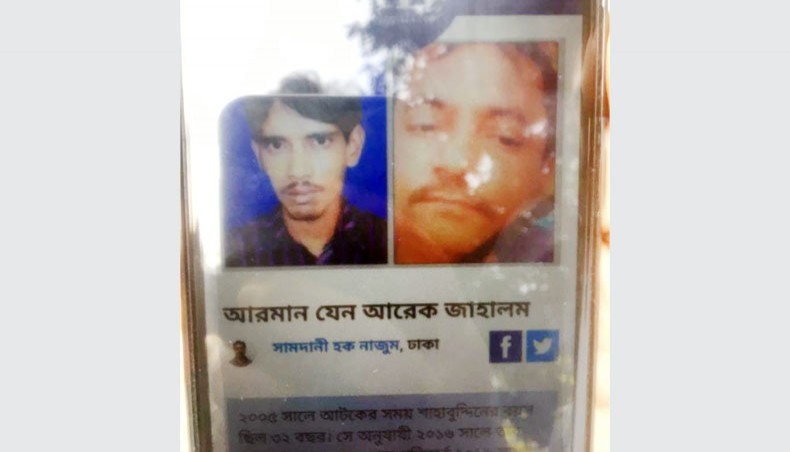 The clipping of a newspaper report published in Dainik Amadershomoy on April 18, 2019, titled ‘Another Jahalam in jail.

The High Court on Thursday asked the jail authorities to free at once Md Arman, who has been languishing in Kashimpur Central Jail, Part 2 since January 30, 2016, following his wrongful arrest by the police.

The bench of Justice Md Mozibur Rahman Miah and Justice Mohi Uddin Shamim passed the order after declaring the imprisonment of Arman illegal and unconstitutional.

The jail senior superin  tendent Abdul Jalil, however, told New Age that they could not free Arman unless the High Court order reached the jail.

The court also asked the inspector general of police to pay Arman Tk 20 lakh as compensation within 30 days for police’s negligence that led to the detention of the youth for nearly five years.

The court also asked the IGP to submit to it on February 14 a report on the payment of the compensation to the victim, who was residing at House No 13, Harts Road, Section 10 of Pallabi.

A police report told the HC earlier that the Pallabi police arrested innocent Arman instead of the fugitive convict Shahabuddin because of matching fathers’ names. Both reside at Bihari camp in Mirpur in the capital.

The court also asked the committee to assess the liability of the four police officers and submit the probe report to the court on April 11.

The court also directed the Dhaka Metropolitan Police commissioner to withdraw the four police officers from their respective stations and post them to a less important position.

The court also asked the DMP to submit a report on February 14 regarding their withdrawal and postings.

Pallab, through his petition, drew the attention of the court to a newspaper report published in Dainik Amader Shomoy on April 18, 2019, titled ‘Another Jahalam in jail.

On September 30, the HC directed the BRAC Bank authorities to pay Jahalam Tk 15 lakh as compensation within 30 days after the bank mistakenly identified him as Abu Salek in a case filed over fund misappropriation by the Anti-Corruption Commission.

The HC on February 3, 2019 ordered the release of Ghorasal Jute Mill worker Jahalam, who spent three years in jail following his wrongful arrest by the ACC, taking into cognizance a newspaper report on the issue.

The Detective Branch on August 30, 2005 arrested an alleged drug-trader named Shahabuddin with 40 bottles of phensedyl in his possession, but he was freed on bail on March 5, 2007 and has since been absconding.

A special court in Dhaka sentenced Shahabuddin in absentia and two of his cohorts to 10 years each and also fined them Tk 5000 each.

But the Pallabi police after receipt of a warrant from the trial court on January 30, 2016, arrested Arman.

The trial court on February 9, 2016 sent Arman to judicial custody after rejecting his prayer that he was not fugitive Shahabuddin.