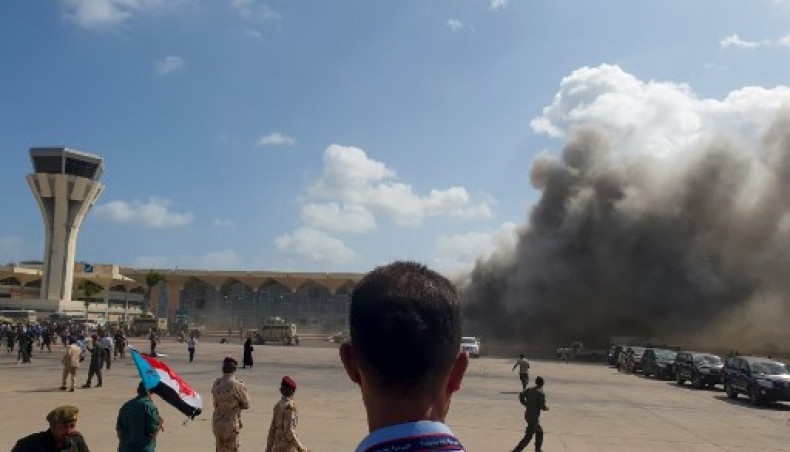 Smoke billows at the Aden Airport on December 30, 2020, after explosions rocked the Yemeni airport shortly after the arrival of a plane carrying members of a new unity government.- AFP photo

At least 26 people were killed when explosions rocked Yemen's Aden airport moments after a new unity government flew in, in what some officials charged was a ‘cowardly’ attack by Iran-backed Huthi rebels.

Although all government ministers were reported to be unharmed in Wednesday's attack, more than 50 people were wounded, medical and government sources told AFP in the southern city, with the casualty toll feared likely to rise.

The International Committee of the Red Cross said one of its employees was among those confirmed dead, with another three wounded.

‘The Yemeni people have endured a terrible amount of suffering over the last five years. A day like this adds even more grief,’ said ICRC operations director Dominik Stillhart.

As smoke billowed out of the airport terminal from an initial blast, with debris strewn across the area and people rushing to tend to the wounded, a second explosion took place.

Video footage shot by AFP shows what appears to be a missile striking the airport apron, which moments before had been packed with crowds, and exploding into a ball of intense flames.

The Saudi-led coalition said: ‘A Huthi drone which attempted to target Al-Masheeq Palace was... shot down.’

Tens of thousands, mostly civilians, have been killed and millions displaced in Yemen's grinding five-year war, which has triggered what the United Nations has called the world's worst humanitarian disaster.

Yemen's internationally recognised government and southern separatists formed a power-sharing cabinet on December 18, forging a joint front against the Huthi rebels who have seized Sanaa and much of the country's north.

Information Minister Moammar al-Eryani said all members of the new government had escaped unharmed from the blast, which he blamed on the Huthi rebels.

‘We assure you that the cowardly terrorist attack by the Iran-supported Huthi militia will not deter us from carrying out our patriotic duty,’ Eryani tweeted.

‘The terrorist acts perpetrated by the Iranian-backed Huthi militia and extremist terrorist groups will not discourage the legitimate government from exercising their duties,’ Hadi said, without specifying which he held responsible for the airport attack.

‘It is too soon to accuse any party before an investigation reveals who executed the attack,’ he told AFP, adding that among the casualties were civilians, security guards and local officials.
The United Nations denounced the attack.

UN Secretary-General Antonio Guterres ‘condemns the deplorable attack’, a spokesman said, adding that the world body was committed to finding a negotiated settlement to the Yemen conflict.

Martin Griffiths, the UN's Yemen envoy, said the attack was ‘unacceptable’ and underscored the need to push for peace while in Brussels, an EU spokesman described it as ‘an unacceptable act of violence’.

The cabinet members arrived in Aden days after being sworn in by Hadi in Saudi Arabia, which leads a military coalition against the insurgents.

Hadi fled to Riyadh after Sanaa fell to the Huthis in 2014.

The new government includes ministers loyal to Hadi and supporters of the secessionist Southern Transitional Council, as well as other parties.

While all oppose the Huthi rebels, deep divisions have grown among them.

Saudi Arabia has been encouraging the unity government to quell the ‘war within a civil war’ and to bolster the coalition against the Huthis, who are poised to seize the key town of Marib, the last government stronghold in the north.

The Saudi ambassador to Yemen, Mohammed Al Jaber, said ‘targeting the Yemeni government upon its arrival at Aden airport is a cowardly terrorist act’.

The United Arab Emirates, which has backed the southern secessionists, said the airport attack was ‘nothing but a sinister project that seeks to undermine the chances of security and stability’.

Yemen still hosts a significant jihadist presence, including both Al-Qaeda and militants loyal to the Islamic State group, despite two decades of US air and drone strikes.

Al-Qaeda in the Arabian Peninsula, which the US considers the terror group's most dangerous branch, has thrived in the chaos of Yemen's civil war.