Lanka govt should take a stand for religious right to burial 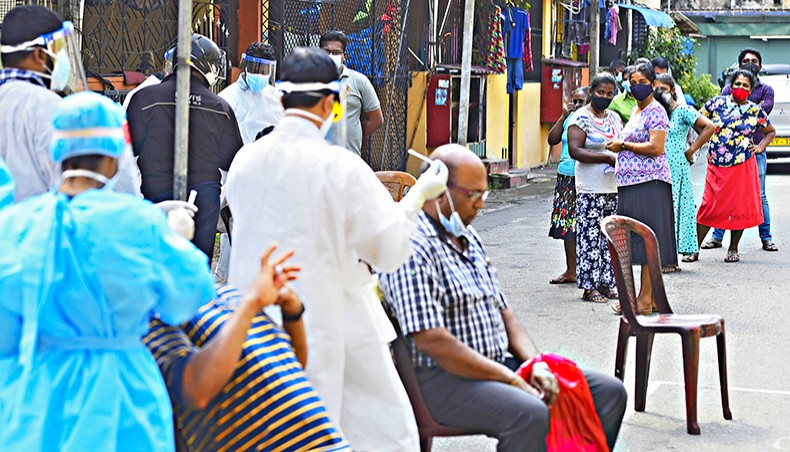 THE map of COVID-19 infection in the country is steadily spreading to more remote parts of the country radiating from the western province which has been the worst affected and the site of origin of the second wave of infection. There was an expectation that the government would institute a lockdown during the final week of the year to prevent people from travelling and celebrating the beginning of the new year. This impression was strengthened by public health inspectors collectively making their disquiet known by calling on the government to order a stop to inter-provincial travel. The government might have been reluctant to put such an inter-provincial travel ban into effect when it is trying to persuade foreign tourists to commence international travel to the country.

With the COVID-19 situation nowhere near as dire as in other parts of the world, there is a kind of self-satisfaction in the Sri Lankan approach to the pandemic, which is perhaps best manifested in the government’s delay to place orders for the COVID-19 vaccine. As in the case of the COVID-19 cremation issue, where a government-appointed committee has been wrestling with the issue for over six months, another government-appointed committee is reportedly contemplating what vaccine to order. In the context of this calm attitude it can be expected that many people felt secure enough to host parties and enjoy themselves in hotels over the holiday weekend with scant regard to the advice of medical specialists that the less person-to-person interaction the better it would be from a COVID-19 control perspective.

On the other hand, the impact of the coronavirus has been greater in some parts of the country than in others, and even in some parts of the cities than other parts within the same city, Those living in crowded circumstances in which social distancing is difficult and hygienic sanitation facilities are not available have been most at risk. The prison population which epitomises these features has been disproportionately affected with catastrophic consequences in terms of their rejection of the situation they are in. The prison riots that took place can be a harbinger of what can happen in the larger society if a large section of the people feel they are being trapped and marginalised to suffer the consequences. Among these worst affected sections of the population, it appears that the Muslim community has been disproportionately affected by the COVID-19 infection.

EVEN though the Muslims are only around 10 per cent of the national population, it appears that a larger number of COVID-19 death have been experienced within their communities. But this is only partly on account of the more congested nature of their living situations. Unlike the Sinhala and Tamil communities who have traditionally been agricultural and own land, the Muslims, who originally came to the country to be traders, tend to live in more urban settings with less space for housing. There is also another significant factor that feeds into the greater numbers of Muslims who fall victim to the coronavirus at present. They are afraid that if they are confirmed as COVID-19 patients, both they and their relatives will be at risk of being forcibly cremated if they fail to recover from the coronavirus infection, which goes against fundamental Islamic tenets.

During the holiday season I received a number of telephone calls from civil society members across the country. The greater concentration of coronavirus infection relative to the population amongst the Muslim community is a theme that has spread among the general population. A Muslim moulavi in Panduwasnuwara in the Kurunegala district bemoaned the fate of the Muslims who are feeling unjustly treated by the government on account of the enforced cremation of COVID-19 victims who die. This was not surprising as it is a grievance that virtually all Muslims articulate, even the minister of justice. The fact that the religious belief of the Muslim community is being violated has led the leader of the nationalist Bodhu Bala Sena, the Buddhist prelate Ven Galagodaaththe Gnanasara to speak up for the religious right of the Muslims to be buried even in cases of COVID-19 deaths.

The venerable monk said that issues pertaining to burying the bodies of people who died of COVID-19-19 should not be politicised, adding that Muslims should be allowed to bury the bodies as it was a matter of religious belief. ‘It is a religious right of Muslims. Because they believe that human beings are born on this earth and one day they should be a fertiliser for the earth. That is Muslim culture. That is a religious right.’ He also recommended the addition of religious representatives to the expert committee on disposal of bodies dying of COVID-19, which comprises of medical officials and technical experts. He also urged for the formation of a proper policy by the government. He also warned that if unresolved, this issue could intensify emotions to proportions where the issue is not what is right but which side will win.

REFLECTING the enlightened sentiments on this issue by the Ven Gnanasara, a Buddhist civil society member from Monaragala had a positive message to give. He said that the district inter-religious group that he was coordinating had decided to donate the travel allowance that they had received to support a nearby Muslim village which was under lockdown due to the discovery of COVID-19 patients. This had happened because the inter-religious group had Muslim members in it who had been able to win the trust and confidence of the Sinhala and Tamil members due to their interactions in the committee they had formed. These informal groups constitute a first line of defence against the spread of inter-community mistrust and violence and are effective problem-solving bodies at the community level. This suggests the value of structured interactions across ethnic and religious divides that can build trust among communities and build the nation.

The role that religious clergy can play in bringing divided communities together cannot be underestimated. In the Sri Lankan context, religious clergy are highly respected and given a status that even exceeds that given to politicians despite their greater access to resources and to coercive power. They are persons who are respected and influential in their communities. As a result they can have a multiplier effect in their localities. They have sufficient maturity to continue with peace and reconciliation work and the necessary experience to navigate the political space if they choose to do so. This is now visible in the joint statement issued by the Buddhist clergy of the Amarapura and Ramanya Nikayas who have written to the president requesting him to reconsider the government policy to enforce cremation of the people who died of COVID-19 against the religious traditions of the Muslims and other religious groups, such as the Catholics.

Civil society organisations such as the National Peace Council have shown at a micro level that it is possible to build goodwill between communities and enable them to mitigate potential conflicts without spilling over into violence. During the period of the last government there was an attempt to establish District Reconciliation Committees in every district under the leadership of the government’s district secretary. According to Dr Joe William of the Centre for Communication Training, who undertook a study of those structures, ‘The functions of the DRCs would be undertake study on the background and causes of religious and ethnic tensions in the locality; formulate suitable strategy and mediate the problems; provide rapid response to resolve conflicts and tensions; mediate conflict resolution; maintain database on incidence of tensions and negotiate and resolve conflicts.’ This is an initiative that the present government would do well to revive to face the challenges of the present time from the grassroots to the national level. It will also serve as a vent to the emotions felt by people trying to find a solution or provide an opportunity to air them at least.