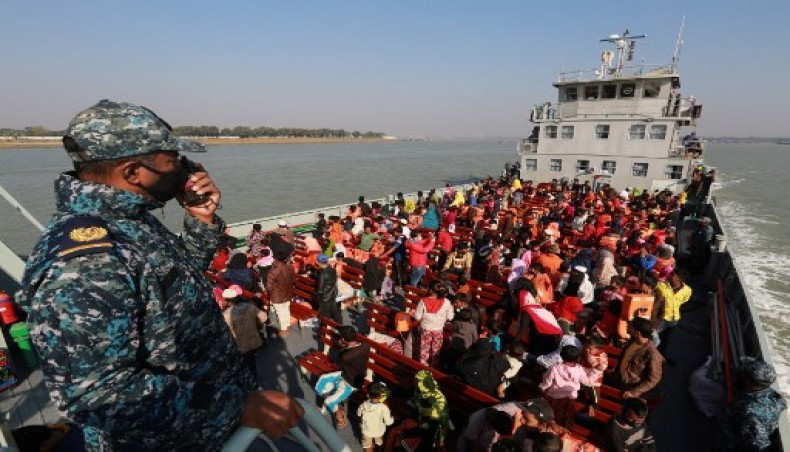 Rohingya refugees sit on a Bangladesh Navy ship as they are relocated to the controversial flood-prone island Bhashan Char in the Bay of Bengal, in Chittagong on December 29, 2020. - AFP photo

‘Initially, the government had a plan to relocate about 700 people in the second phase. But due to expression of spontaneous voluntary intent to go to the island, we had to increase the number to take over 1,100 people. Finally we took 1,804 people,’ he said.

They belong to about 427 families and each of the families would get a house in the colonies built at the Bhasan Char island, a government official said.

A fleet of Bangladesh Navy ships started from Chattogram Boat Club jetty at about 9:30am and reached the island after a four-hour journey, he said.

It was the second phase of transfer as the government was planning to take about 1,00,000 of at least 11 lakh members of the community to decongest the existing camps situated in areas adjacent to borders with Myanmar.

In the first batch, a total of 1,642 Rohingya people were taken to Bhasan Char on December 3.

The island is connected with the mainland through waterways.

In addition to government agencies, around 22 NGOs are already there to extend all possible support to the relocated Rohingyas, according to the government information.

The relocation is a part of the broader plan of repatriation which is the only priority for the Bangladesh government, the foreign ministry said on December 3.

The skill development and livelihood opportunity that the Rohingyas would be able to avail in Bhashan Char would prepare them for their reintegration in the Myanmar society upon return, it said.

The government earlier rescued over 300 Rohiyangas, who had made an attempt to go to a third country by boat arranged by human traffickers, to Bhasan Char.

A total of 8,60,000 Rohingyas, mostly women, children and aged people, entered Bangladesh fleeing unbridled murder, arson and rape during ‘security operations’ by Myanmar military in Rakhine, what the United Nations denounced as ethnic cleansing and genocide, beginning from August 25, 2017.

Not a single Rohingya returned to their home in Rakhine as the Myanmar government has almost stalled the Rohingya repatriation process resorting to various means, including near discontinuation of clearing of names of the refugees eligible to go back to their homeland and an unwillingness to hold meetings of the bilateral joint working group and the tripartite mechanism led by China.