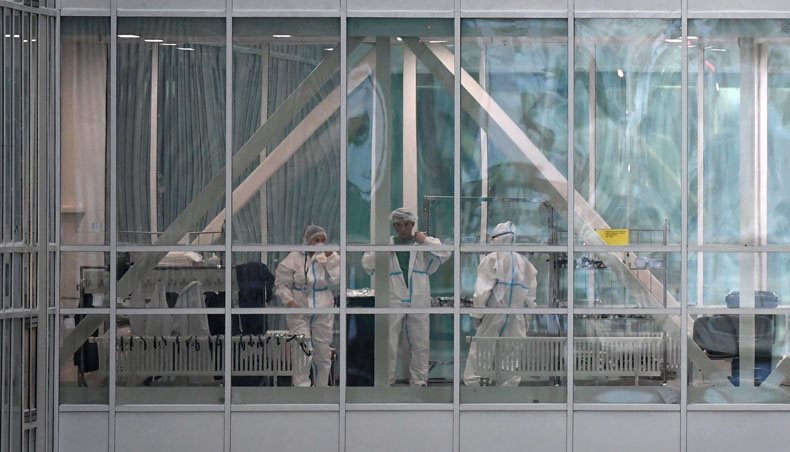 Medical workers are seen in a passageway between the buildings of a hospital in Kommunarka, where patients suffering from the coronavirus disease are treated, on the outskirts of Moscow on December 25, 2020. — AFP photo

Russia on Monday said that its coronavirus death toll was more than three times higher than it had previously reported, making it the country with the third-largest number of fatalities.

For months president Vladimir Putin had boasted about Russia’s low fatality rate from the virus, saying earlier this month that it had done a ‘better’ job at managing the pandemic than western countries.

But since early in the pandemic, some Russian experts had said that the government was playing down the country’s outbreak.

On Monday, Russian officials admitted that was true.

The Rosstat statistics agency said that the number of deaths from all causes recorded between January and November had risen by 229,700 compared to the previous year.

‘More than 81 per cent of this increase in mortality over this period is due to Covid,’ said deputy prime minister Tatiana Golikova, meaning that over 186,000 Russians had died from COVID-19.

Russian health officials had registered more than three million infections since the start of the pandemic, putting the country’s caseload at fourth-highest in the world.

But they had only reported 55,265 deaths – a much lower fatality rate than in other badly hit countries.

Russia had been criticised for only listing COVID-19 deaths where an autopsy confirmed the virus was the main cause.

Rosstat’s new figures mean that Russia now has the world’s third-highest COVID-19 death toll behind the United States with 333,140 and Brazil with 191,139, according to an AFP count.

The figures came as authorities held out against re-imposing a nationwide lockdown in the hopes of buttressing a struggling economy even as the country was battered by a second wave of infections.

Russia’s government predicted the economy will shrink by 3.9 per cent this year, while the Central Bank expected an even deeper decline.

During his annual end-of-year press conference earlier this month, Putin rejected the idea of imposing the kind of lockdown many European countries introduced going into the Christmas holidays.

‘If we follow the rules and demands of health regulators, then we do not need any lockdowns,’ he said.

While strict measures had been imposed in some major cities, authorities in many regions had limited restrictions to mask-wearing in public spaces and reducing mass gatherings.

But many Russians flout social distancing rules and in recent weeks the country’s outbreak had overwhelmed poorly funded hospitals in the regions.

Russia had instead pinned its hopes on corralling its outbreak by vaccinating people en masse with its homemade Sputnik V jab, named after the Soviet-era satellite.

The country launched a mass vaccination programme earlier this month, first inoculating high-risk workers aged between 18 and 60 without chronic illnesses.

Over the weekend people older than 60 got the green light to receive the shot.

On Monday Sputnik V’s developer, the state-run Gamaleya research centre, said that around 700,000 doses had so far been released for domestic use.

However, Russia had not said how many people it had vaccinated so far, and according to recent surveys by state-run pollster VTsIOM and the Levada polling agency only 38 per cent of Russians plan to get the shot.