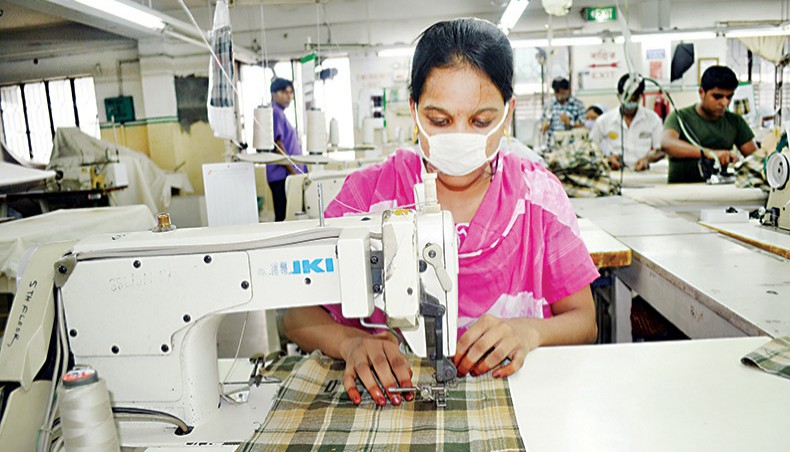 A file photo shows readymade garment workers sewing clothes at a factory on the outskirts of Dhaka. Labour leaders have opposed and condemned the apparel factory owners’ proposal to suspend the legal provision of 5 per cent yearly increment for RMG workers for two years. — New Age photo

Labour leaders have opposed and condemned the apparel factory owners’ proposal to suspend the legal provision of 5 per cent yearly increment for RMG workers for two years.

Apparel exporters on Sunday urged the government to hold the provision of yearly increment stipulated by the minimum wage board on the premise of a slowdown in business activities due to the coronavirus outbreak.

Labour leaders threatened to wage tougher movements to protect the lawful rights of the workers and urged the government not to grant any anti-labour proposals from the owners.

Bangladesh Knitwear Manufacturers and Exporters Association in a letter on Sunday requested the labour ministry to suspend the legal provision of 5 per cent yearly increment for the readymade garment workers for two years.

The letter sent to state minister for labour Monnujan Sufian said that it had become difficult for the garment factory owners to pay the workers’ wages regularly as the export business was going through uncertainty amid the coronavirus pandemic.

Under the circumstances, the provision of 5 per cent increment for the RMG workers is ‘illogical’ as workers’ wages all over the world have been falling amid the pandemic, the BKMEA said.

In November 2018, the minimum wage board announced Tk 8,000 as minimum monthly gross wage with a provision of 5 per cent yearly increment on basic pay for the readymade garment sector workers.

He said that the garment sector workers would not accept the attempt to deprive them of their lawful rights and the government should also reject the factory owners’ proposal.

Wajed-ul said that the RMG exporters had received stimulus from the government amid COVID-19 but many of the workers had not availed the benefit of the package.

The wage board sets 5 per cent yearly increment considering inflation and the demand for holding the provision is illogical, he said.

‘We strongly oppose and condemn the attempt of the factory owners to suspend the increment of RMG workers’ wages for the next two years,’ said Towhidur Rahman, former secretary general of IndustriALL Bangladesh Council.

Towhidur, also the president of Bangladesh Garment Industry Workers Federation, said that if the government granted the ‘immoral’ proposal of the factory owners, garment sector labour organisations would announce tougher movements to protect the interests of the workers.

The government and factory owners will be responsible if any untoward situation takes place in the sector due to the unethical proposals made by the factory owners, he said.

Demanding special incentive for the RMG workers, Towhidur said that the provision for the 5-per cent increment was included in the wage structure to adjust the yearly inflation and no conscientious person can propose to suspend the provision.

‘Workers are the worst sufferers of COVID-19 and the proposal made by factory owners to hold the yearly increment for two years is absolutely an anti-labour bid,’ IndustriALL Bangladesh Council secretary  general Babul Akhter told New Age on Monday.

He said that the county’s RMG workers deserved special incentive as they continued to work risking their lives amid the coronavirus outbreak.

The factory owners’ attempt to deprive the workers of their legal rights had proved that they were not worker-friendly anymore, Babul said.

He said that the factory owners always tried to benefit from any crisis and during COVID-19, they had obtained stimulus in the name of workers’ wages and were now trying to benefit through suspending the provision of the workers’ yearly increment.