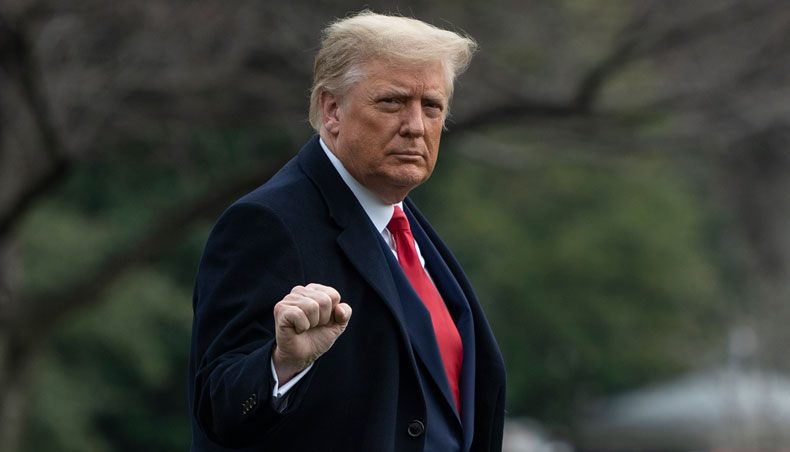 In this file photo US president Donald Trump departs the White House in Washington, DC, on December 12, 2020. — AFP photo

After delaying for nearly a week and under pressure from all sides, US president Donald Trump finally signed a massive $900 billion stimulus bill Sunday, in a long-sought boost for millions of Americans and businesses battered by the coronavirus pandemic.

The package ‘providing coronavirus emergency response and relief’ is part of a larger spending bill that, with Trump’s signature, will avoid a government shutdown on Tuesday.

‘I am signing this bill to restore unemployment benefits, stop evictions, provide rental assistance, add money for Paycheck Protection Programmes, return our airline workers back to work, add substantially more money for vaccine distribution, and much more,’ the president said in a statement from his Christmas vacation at his Mar-a-Lago resort in Florida.

The turnaround came after a day marked by calls from all sides of the political spectrum for action to avert an economic and social disaster, especially for America’s vulnerable populations.

Two federal unemployment benefit programmes approved in March as part of an initial COVID-19 relief plan expired at midnight on Saturday, cutting off an estimated 12 million Americans, according to The Century Foundation think tank.

The relief package, which was first passed by Congress on December 21, extends those benefits as well as others set to expire in the days ahead.

But for days, Trump had refused to put his signature on it, calling the bill a ‘disgrace’ and catching both Democrats and Republicans off guard with his complaints, which came after months of negotiations.

Influential Republican senator Mitt Romney said he was ‘relieved’ at the signing. ‘Help is now on the way to workers, families, and small businesses across the country who are desperately in need,’ he tweeted.

Earlier Sunday, he had urged Trump to ‘immediately sign or veto the COVID-19 relief package so Congress can act before it’s too late.’

In his statement Sunday, the president continued to push for the $600 direct payments to US taxpayers spelled out in the bill to be more than tripled, and argued the legislation included too much excess spending on unrelated programmes.

He has not said why he waited until the bill was already approved to make his views known.

The new stimulus package extends federal aid to the unemployed until mid-March, and provides guaranteed loans and billions of dollars in aid to small businesses, restaurants, hotels, airlines and other companies.

It extends the moratorium on evictions of people unable to pay their rent, suspends foreclosures and provides funds for the distribution of COVID-19 vaccines.

The aid is essential to the world’s largest economy, hit hard by restrictions put in place to halt the spread of COVID-19.

‘I applaud the president’s decision to get billions of dollars of crucial COVID-19 relief out the door and into the hands of American families,’ tweeted Republican Senate leader Mitch McConnell.

House Democratic leader Nancy Pelosi called the bill ‘a down payment on what is needed to crush the virus, put money in Americans’ pockets & honor our heroes.’

‘We must quickly take further action,’ she added in a tweet.

Romney was not the only politician to have urged the president to change course Sunday.

‘I understand he wants to be remembered for advocating for big checks, but the danger is he’ll be remembered for chaos and misery and erratic behavior if he allows this to expire,’ Republican Senator Pat Toomey told Fox News on Sunday.

Senator Bernie Sanders said that ‘what the president is doing right now is unbelievably cruel.’

‘Many millions of people are losing their extended unemployment benefits,’ he said on ABC.

‘They’re going to be evicted from their apartments because the eviction moratorium is ending.’

Sanders said increased direct payments could be approved in the coming days.

Democrats in Congress sought Thursday to approve a measure to increase the direct payments in line with what Trump wants, but Republicans blocked it.

It was seen largely as a theatrical move with little hope of passage designed to expose the rift between Republicans and the outgoing president.