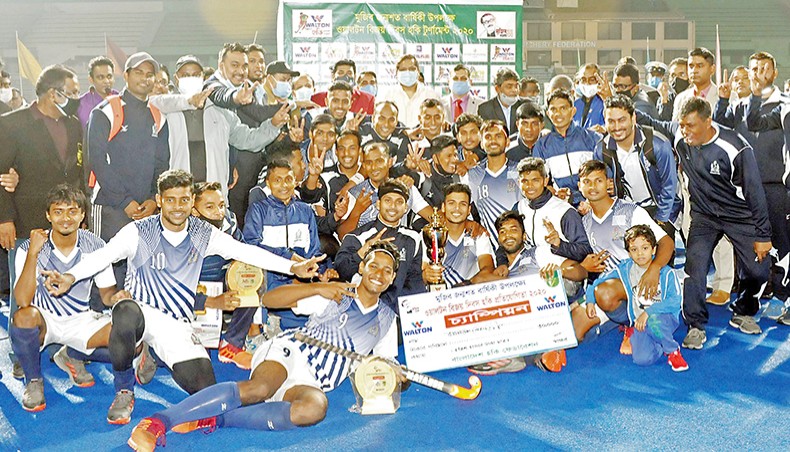 Bangladesh Navy players and official celebrate with the trophy after defeating Air Force in the  Victory Day Hockey final at the Maulana Bhashani National Hockey Stadium on Sunday. — Courtesy photo

Bangladesh Navy clinched their third consecutive title of the Victory Day Hockey Tournament after a 5-0 win against Air Force in the final at the Maulana Bhashani National Hockey Stadium on Sunday.

Mahbub Hossain scored a hat-trick for the winners with three field goals in the 19th, 33rd and 40th minutes.

Asharaful Islam scored from a penalty corner in the 51st minute before Mainul Islam hit the final nail in Air Force’s coffin with a field goal in the 54th minute.

Air Force team coach Moniruzzaman said that his young charges, mostly BKSP students, could not cope with the pressure of playing a final for the first time.

‘Air Force played the final of this tournament for the first time and could not handle the pressure against holders Navy, studded with national team players,’ said Moniruzzaman.

National team player and Navy’s captain Russell Mahmud Jimmy was ecstatic about his team’s undefeated title victory and claimed not to be miffed about remaining goal-less in all five matches of the competition.

‘I am happy about my team’s win. Scoring a goal is pointless if the team still loses. I don’t play for individual success, I play for my team’s success,’ Jimmy said after the match.