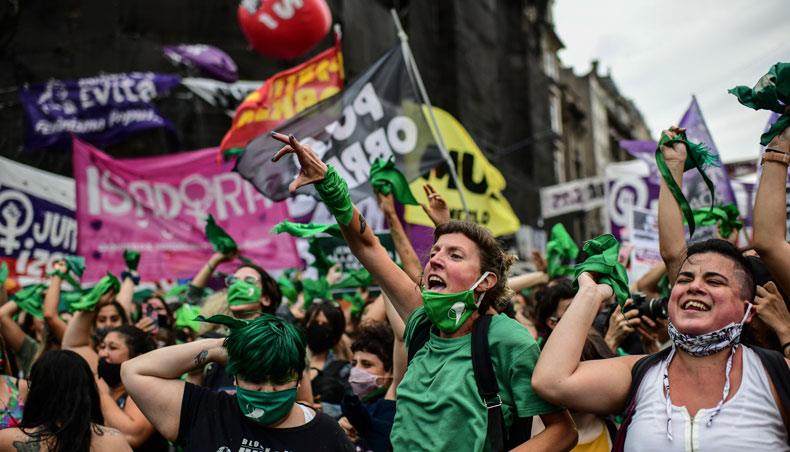 In this file photo taken on December 11, 2020 demonstrators celebrate with green headscarves — the symbol of abortion rights activists — outside the Argentine Congress in Buenos Aires on December 11, 2020, after legislators passed a bill to legalise abortion. — AFP photo

At the entrance to Argentina’s Congress is a plaque reminding legislators that Our Lady of Lujan is the patron saint of the country’s political parties – a not-so-subtle nod to religion in a nation considering whether to allow abortions.

As Argentina’s Senate prepares to vote on a bill that would legalise the practice, the Catholic Church had joined forces with evangelical Christians to fight the measure tooth and nail.

The bill, which aimed to legalise voluntary abortions at up to 14 weeks, was passed by the Chamber of Deputies on December 11 and will be debated and voted on in the Senate on Tuesday.

Two years ago a similar bill passed the lower house but was defeated in the Senate following a determined campaign by both Catholics and evangelicals.

Argentina’s constitution guaranteed freedom of religion and a 1994 reform removed the requirement that the president be Catholic.

However it retained a reference to God in its preamble and its second article guaranteed government support for the Catholic Church.

‘The Catholic Church in Argentina has great sway. There’s a very strong Catholic culture in the political world,’ sociologist Fortunato Mallimaci, who wrote a book on what he said was the myth of Argentine secularism, told AFP.

‘Religious groups look for state support and the state, when it feels weak, looks for support from religious groups. Today the Catholic Church wields more political than religious clout,’ he said.

Catholicism is a strong force in Argentina, the homeland of Pope Francis.

The state pays a salary to archbishops and subsidises Catholic schooling, which accounts for 36 per cent of education in Argentina, according to Mallimaci.

However, Catholicism had been losing influence as evangelical Christianity gained ground.

According to a 2019 poll by a government agency, 62 per cent of Argentines identified as Catholic, 18.9 per cent as non-religious, and 15.3 per cent as evangelical.

The Catholic Church’s sway could be seen in Argentina’s delay compared to other countries in adopting a number of laws – divorce was legalised only in 1987, sex education introduced in 2006, gay marriage approved in 2010, and a gender identity law passed in 2012.

Abortion was currently only allowed in two cases – rape and a danger to the mother’s life.

‘There is an opposition and huge rejection from the Catholic Church, which weighs heavily’ on the chances of the law passing, constitutional lawyer Alfonso Santiago told AFP.

However, Santiago believed the relationship between the government of president Alberto Fernandez, who sponsored the abortion bill, and the Catholic Church will remain strong regardless of which way the vote went.

‘I don’t think there will be a break in collaboration on other issues. It didn’t happen before’ when, for example, same-sex marriage was approved, he said.

While Francis had in the past likened abortion to hiring an assassin, he’s remained silent over the current debate.

‘The problem for the Catholic Church if abortion is legalised is that it will be up to it, and not the state, to ensure that its faithful comply with a prohibition that will be only religious,’ said Mallimaci.

A 2020 government poll found that 22.3 per cent of Catholics in Argentina believed that a woman should have the right to an abortion if she wanted one.

Meanwhile 55.7 per cent said that it should be permitted only in certain situations while just 17.2 per cent supported a blanket ban.

Since 2018, evangelicals had come to the fore in protesting legalisation.

‘They have the momentum of the reborn,’ said Mallimaci, pointing to the light blue handkerchiefs brandished by evangelicals at their protests, as a counterweight to the green ones sported by abortion rights activists.

‘Catholics don’t mobilise in that way,’ he added.

Despite their constant growth, evangelical churches in Argentina ‘don’t have the same political weight as in other countries, such as Brazil where they can count on a parliamentary bloc.’

Their strength, however, lied in street protests and they will be out in force on Tuesday in front of Congress, face-to-face with abortion rights demonstrators.