Newly launched aviation and aerospace univ in Bangladesh to be world-class: VC 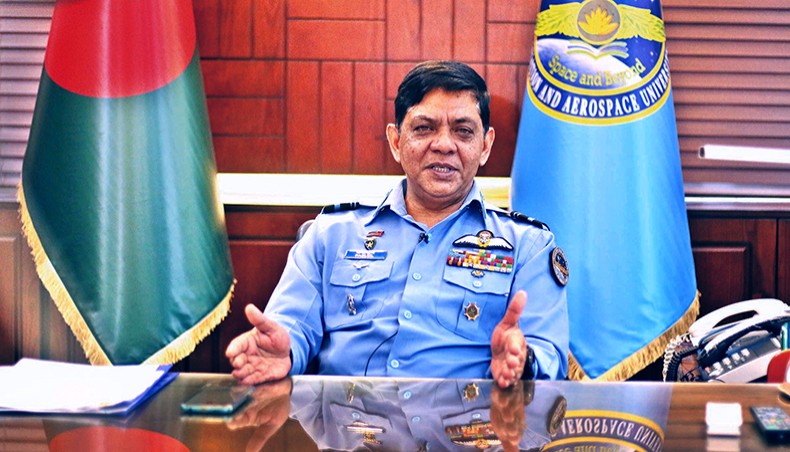 Bangabandhu Sheikh Mujibur Rahman Aviation and Aerospace University vice-chancellor Air Vice-Marshal AHM Fazlul Haque has said that they are working to build a world-class residential university for Bangladeshi and foreign students to cater to needs of the global aviation industry.

For this purpose, the university would introduce world-class academic facilities and courses in the upcoming decade.

In a recent interview with New Age at the university’s temporary campus in Dhaka, the VC also said that they had already started classes in three departments for bachelor’s and master’s degrees in 2020 with an impressive response from candidates.

And the institution, he went on, is now steadily moving forward to launch the courses for other departments with international-standard syllabuses.

Fazlul, who was commissioned as an officer in 1985 into the general duties (pilot) branch of the Bangladesh Air Force, said that the university would also focus on research and capacity building in addition to pursuing the academic curriculum in line with the European Union Aviation Safety Agency.

To this end, he said, they are closely working with Airbus.

Various countries and multinational companies are also willing to collaborate with the university in providing a world-class academic and industrial environment to future Bangladeshi civil aviators and avionics engineers, added the vice-chancellor.

A German company wants to set up flying simulators for the university as they see a huge prospect of its programmes, he added.

Fazlul said that British company Marshall Aerospace and Defence Group had also shown their interest to collaborate with the university located in northern Lalmonirhat, which would eventually be transformed, as he said, into a green aviation city.

‘Though we are working with Airbus, the students from this university can go anywhere in the world,’ said Fazlul, who graduated from defence colleges in Bangladesh, China and India.

The government is modernising the Saidpur airport into a regional airport and the university, having its own airfield, will be connected to that airport too, he said.

With the university located in Lalmonirhat, the rural area would turn into an aviation city also featuring a maintenance-repair-overhaul facility, an aircraft-manufacturing research centre and a number of related institutes, including a space research institute, the VC added.

‘We also want to develop skilled manpower in space research for us,’ he said, adding, ‘We are working with the University of Surrey [in the United Kingdom] for this purpose.’

The university would also be sending small satellites to space in future, he said.

‘We have planned to send a 12-unit small satellite to space,’ he said, adding, ‘It will be equipped with earth observation devices and with the ADS-B [Automatic Dependent Surveillance–Broadcast] technology to detect flying objects.’

He said that they had targeted to launch the small satellite in 2022 but the COVID-19 pandemic might delay the launch.

The military pilot-turned -academic said that students showed huge interest in the university after it announced the first academic session in early 2020 after the university received approval in February 2019.

About 4,000 candidates, including 2,800 golden GPA holders, vied for the 30 seats for the BSc course in aeronautical engineering with aerospace and avionics major.

‘We want to keep the number of students limited as a student in the aviation sector needs not only academic certification but also professional certification and licensing,’ he added.

He said that no subject would be selected for teaching in the university without assessing its demand in the job market.

Fazlul disclosed that the government would finance the students while various airlines had, too, already approached the university with their demand for pilots wanting to take the responsibilities of the students.

The students would be selected using a European multi-screening process.

‘If we find a talent, we will groom them up,’ he said.

The VC said that the students of the university would have an academic certificate, on the one hand, and an internationally-approved professional licence, on the other.

‘An academy-industry collaboration is a must,’ he said pointing to the demographic dividend.

‘None of the students [of the university] will remain unemployed, rather they will be offered a job before the completion of their course,’ he added.

A number of European airlines, he said, would assist them to this end while Biman Bangladesh Airlines, NovoAir, and US-Bangla Airlines have already placed their demand for skilled people.

Fazlul said that they were still in the process of building world-class facilities on their Lalmonirhat campus for the international trainers and academics.

‘Every year, Bangladesh has a demand for 200 pilots,’ said the vice-chancellor who has also an MBA degree from the Institute of Business Administration under the University of Dhaka.

The International Civil Aviation Organisation forecasts that the growth of global air passenger would double by 2030 and the Asia-Pacific region is expected to become the largest air transport market in the world within next 10 years.

The aviation university VC stated that it was not a military entity rather a research installation to build aviation capacities.