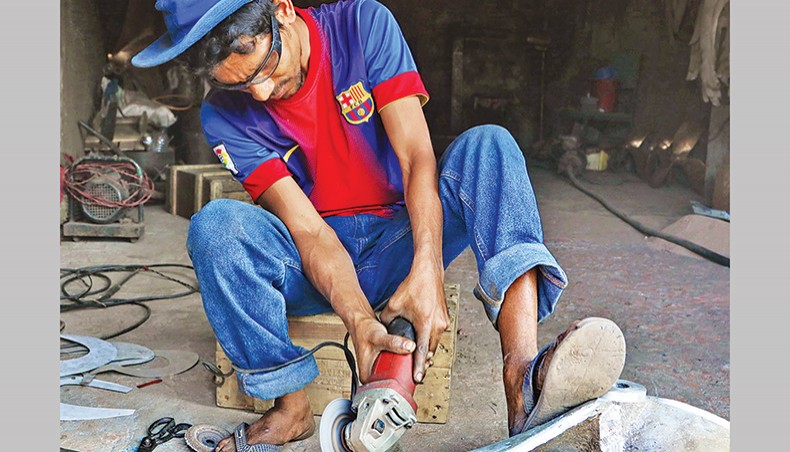 A file photo shows a man working at a light engineering factory in the capital. — New Age photo

The light engineering sector has failed to tap into local and global potentials due to faulty policies of the government, businesses said.

Although the government has announced light engineering goods as Product of the Year for 2020, an unrealistic tax structure is impeding the growth of the sector, they said.

Sector leaders identified lack of proper policies, shortage of funds and technology as the key challenges the light sector is grappling with.

They demanded a rational tax policy for the sector saying that manufacturers were losing competitiveness due to high tariffs on raw material import whereas import duty on finished products was 1 per cent.

‘It is really unfortunate that the government imposed high duty on import of raw materials for the manufacturers but imposed only 1 per cent duty on the import of finished products,’ he said.

Razzaque said that in the financial year 2019-20, the government brought manufacturing of light engineering products under the coverage of value-added tax and the National Board of Revenue exempted the sector from payment of VAT in 2020 through imposition of some unacceptable conditions.

‘Globally, light engineering is the life-line industry as the success of big industries always depends on this sector but our policymakers are not trying to realise the importance of light engineering for industrialisation,’ he said.

‘If we can support the light engineering sector properly, the backward and forward linkages would be cheap for the main industries in the country and the sector will be the import substitute,’ said Nitol Niloy Group chairman Abdul Matlub Ahmad.

More than 8,000 parts are used in a car and if Bangladesh can ensure component manufacturing, a strong automobile industry will develop in the country, he said.

Matlub said that there was also a huge export potential for components.

He said that the light engineering sector could save and earn foreign currency through producing machinery as Bangladesh was dependent on imported capital machinery.

Matlub, also the president of India Bangladesh Chamber of Commerce and Industry, said that the sector needed low-cost financing and technological support.

He also demanded a central raw material bank for the light engineering sector.

‘There are about 50,000 factories with six lakh employees in the sector across the country and the sector can become the main export sector if the government provides the proper policy support,’ Razzaque said.

According to the sector leaders, the country’s light engineering product export stood at $688.84 million in the financial year 2016-17 but the export has been on the decline in recent years due to unfavourable policies with earnings plunging to $319.74 million in FY19.

Data from the Bangladesh Engineering Industry Owners’ Association showed that the domestic market for light engineering products and services was worth Tk 50,000 crore.

Of this amount, the country imports light engineering products worth Tk 29,000 crore.

Razzaque said that the government provided 15 per cent cash incentive against export of light engineering products but manufacturers were losing their competitiveness due to high rates of tax and VAT on raw materials and services.

Due to the high tax and VAT rates, entrepreneurs are feeling discouraged to produce capital machinery as their businesses are taking a beating from duty-free imported machinery, he said.

Razzaque said that small entrepreneurs had developed the sector with investments worth $15 billion while financing from the government was completely absent in the sector.

The government should extend the facility of the Bangladesh Bank’s Equity and Entrepreneurship Fund to the sector, he said.

Razzaque also demanded establishment of raw material and cutting-tool banks and an international standard testing centre to tap into the potential of the $6-trillion global export market.

He also demanded that common facilities for small and medium enterprises should be ensured along with the establishment of a training centre to produce skilled manpower, which could help the sector to compete better on the export market.

Razzaque said that the commerce ministry with support from the World Bank Group’s International Finance Corporation had undertaken the Export Competitiveness for Jobs project.

Under the project, four common facility centres would be implemented for the light engineering sector.