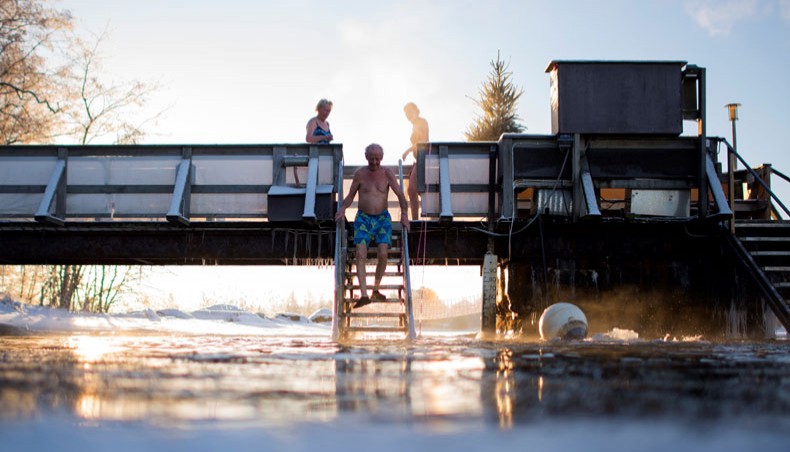 In this file photo taken on January 15, 2017, Finns take a dip in an unfrozen hole of water after a sauna session in Vaasa, as air temperature is -17°C and water is +1°C. —AFP Photo

Finns’ penchant for relaxing in blazing hot steam-filled rooms was on Thursday put on the UN’s list of the world’s intangible heritage.

With an estimated three million saunas for 5.5 million people, the steam bath is a traditional Finnish institution which goes back hundreds of years.

‘Sauna culture in Finland is an integral part of the lives of the majority of the Finnish population,’ the UN body said.

The culture ‘involves much more than simply washing oneself. In a sauna, people cleanse their bodies and minds and embrace a sense of inner peace’, UNESCO said.

Saunas are ubiquitous in Finnish homes, blocks of flats and at swimming pools, where bathers gather often in the nude in temperatures of around 85 degrees Celsius or 185°F.

Over the years, Finnish leaders have regularly invited their counterparts and foreign dignitaries into the sauna to continue discussions, and Cold War president Urho Kekkonen’s ‘sauna diplomacy’ became a keystone of Finland’s relations with neighbouring Soviet Russia.

But the practice has also come in for heavy criticism for excluding women, as the sexes usually bathe separately.

In winter the sauna is often followed by a dip in a hole in the ice of one of Finland’s many thousands of lakes, a ritual which many sauna devotees insist improves health and mental wellbeing.

The often quiet contemplation inside the sauna, alone or with others, is something of a sacred ritual for Finns, for whom regular churchgoing is rare.

Traditionally the sauna has also been the place where life began and ended—up until the 1940s rural women often gave birth there, as the only place in the home with hot water and privacy, and the sauna is where the last rites were performed after a death.

The term ‘sauna’ is one of the few words from the obscure Finnish language to pass into international use, and the name is thought to have originally referred to the hot stones upon which water is thrown to create steam.

For 11 years, the Finns hosted a sauna endurance world championship although it was abandoned in 2010 after the death of a competitor in the 110 degree, 230° Fahrenheit, heat.

However in 2019, the country successfully reclaimed the world record from China for the highest number of different nationalities in one sauna, when bathers from 101 different countries squeezed into an enormous steam bath in the capital Helsinki.