Yet one more pledge to curb border killing 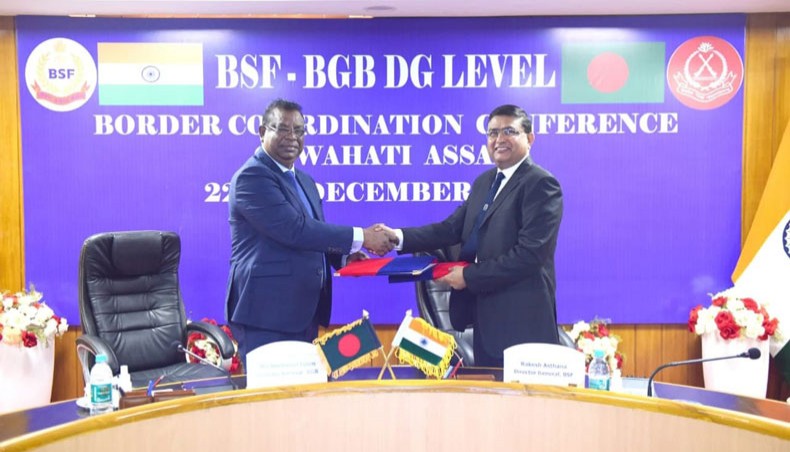 The Indian Border Security Force made yet another promise on Friday to ‘reduce significantly’ the killing of Bangladeshi nationals at the border after the Border Guard Bangladesh expressed its grave concerns over the rise in the number of deaths and injured in 2020 compared with the past few years.

In a joint record of discussion signed on Friday amid the five-day director general-level talks held in Indian city Guwahati, BSF director general Rakesh Asthana assured that ‘the death incidents in the border area will be made to reduce significantly in near future’.

Ten Bangladeshis were killed after BSF director general Rakesh Asthana on September 19 had made a promise to bring it down to zero.

This year, Bangladesh so far witnessed the highest number of killings of its nationals along the border by the BSF in the past 10 years.

The number of Bangladeshis killed between January 22 and December 22 of the current year stood at 46 while the number of deaths was 35 in 2019 and only three in 2018, according to the government statistics.

In the joint statement, BGB director general Major General Md Shafeenul Islam expressed his ‘grave concern’ over the killings, injuring and beating of unarmed Bangladeshi nationals by the BSF and their nationals in the bordering areas.

‘People of Bangladesh always appreciate the existing excellent relationship between the two border guarding forces and expect that the BGB and the BSF will take necessary measures to bring down the death cases down to zero,’ he said, according to the joint statement.

The BGB chief further urged his counterpart to uphold human rights and make all-out efforts to apprehend the criminals and bring them under the law of the land instead of killing them.

Iterating the need for joint efforts to uphold human rights and curb violence on the border, both sides agreed to conduct joint night patrols in vulnerable areas along the border as a more effective initiative to ensure zero death, the joint statement read.

The conference would conclude on Saturday formally.

This is the second time in recent years when a Bangladeshi was killed in the midst  of the border talks between the chiefs of bordering forces.

He sought cooperation from the BSF to uphold the existing friendly relationship between the border guarding forces.

The joint statement read that both sides agreed to continue to sensitise the border populace to refrain from illegal crossing or violations and at the same time assured maintenance of the sanctity of the border by the members of both forces.

BGB chief also voiced his concern over the presence Bangladeshi armed miscreants belonging to a number of regional parties of the Chattogram Hill Tracts in hideouts in the Indian state of Mizoram and requested their dissolution.

BSF chief assured their counterpart of appropriate action against those hideouts, if found.

BGB chief also expressed his concern over the smuggling of various types of drugs and narcotics, especially Yaba tablets as well as firearms, gold and cattle, among others, and sought cooperation from the BSF to prevent the menace.

Border killings started coming down since 2011 but the number rose again in 2019 when 41 people were killed by the force, almost four times the fatalities in 2018 when 11 such killings took place, according to data shared by rights group Odhikar.

At least 1,185 Bangladeshis were killed by the BSF along the border between 2000 and 2019, according to Odhikar data.

In the 48th BGB-BSF summit conference in Dhaka in June 2019, the then BSF chief, Rajani Kant Misra, termed these killings as unfortunate, promising to bring down such killings to zero.

Similar pledges were made by the Indian side also in 2018 and 2017 border conferences.

A joint statement issued on September 7, 2011, over the visit of the Indian prime minister, Manmohan Singh, to Dhaka also decided to prevent the loss of lives along the border.