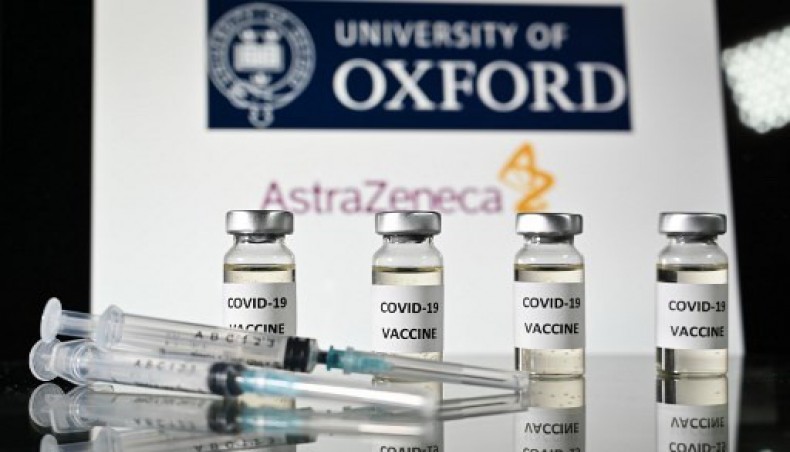 In this file photo taken on November 17, 2020 An illustration picture shows vials with Covid-19 Vaccine stickers attached and syringes, with the logo of the University of Oxford and its partner British pharmaceutical company AstraZeneca.- AFP photo

The University of Oxford and drug manufacturer AstraZeneca have applied to the UK health regulator for permission to roll out their COVID-19 vaccine, health minister Matt Hancock said Wednesday.

‘I’m delighted to be able to tell you that the Oxford AstraZeneca vaccine developed here in the UK has submitted its full data package to the MHRA for approval,’ he said.

‘This is the next step towards a decision on the deployment of the vaccine,’ the health minister added at a press conference where he announced Britain would impose travel restrictions on South Africa to curb the spread of another new, more transmissible strain of the coronavirus.

The Pfizer/BioNTech vaccine was the first coronavirus shot to be authorised for use by the UK’s independent medicines regulator and has been given to 500,000 of the country’s most vulnerable people since its rollout last month.

The bulk of Britain’s vaccine requirements are expected to be met by the jab developed by AstraZeneca and the University of Oxford, as the government has ordered 100 million doses.

More than a million Americans have received the first dose of their COVID-19 vaccines, a milestone in the biggest immunisation drive in US history that came even as officials admitted the pace of rollout was slipping behind schedule.

The news comes as the winter surge in cases rages across the country, where the virus has claimed more than 320,000 lives and is on course to be the third leading cause of death in the year.

Centers for Disease Control and Prevention director Robert Redfield said jurisdictions had logged the first million shots with his agency since the biggest immunization drive in US history kicked off on December 14.

‘While we celebrate this historic milestone, we also acknowledge the challenging path ahead,’ said Redfield.

‘There is currently a limited supply of COVID-19 vaccine in the US, but supply will increase in the weeks and months to come.’

Some three million doses of the Pfizer-BioNTech vaccine were shipped last week, and the official goal for this week was two million more Pfizer doses, and six million from Moderna.

Argentina’s health ministry said Wednesday it has given the controversial Russian Sputnik V coronavirus vaccine ‘emergency’ authorisation, making the country the first in Latin America to do so.

The first shipment of the 25 million doses of the vaccine bought by the Argentine government is due to arrive on Thursday.

Clinical trials of the CoronaVac coronavirus vaccine developed by Chinese laboratory Sinovac have ‘reached the efficacy threshold’ demanded by the World Health Organisation, the Brazilian institute charged with its production and distribution said on Wednesday.

However, the Butantan Institute didn’t publish the results of those trials — the last before authorisation.

The decision makes Canada the second country to green light the Moderna vaccine, after the US.

Mexico on Wednesday became the first Latin American country to receive coronavirus vaccines for mass immunisation against a disease that has had a devastating impact across much of the region.

The government plans to start inoculations on Thursday after the first 3,000 doses produced by US pharmaceutical giant Pfizer and its German partner BioNTech arrived by courier plane from Belgium.