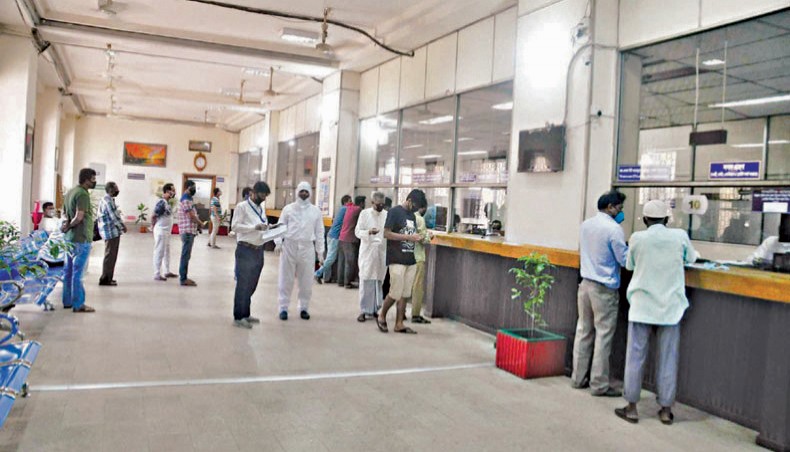 A file photo shows clients receiving services at a branch of a state-owned bank in the capital. One-third of the country’s banks are holding three-fourths of the deposits in the country’s banking sector, according to Bangladesh Bank data. — New Age photo

As the government-owned banks have been operating for long, they are getting higher amounts of deposits, he said, adding, ‘Even after the surfacing of scams and irregularities, the state-owned banks are doing well in terms of deposit collection as people still have trust in those banks due to the government’s ownership.’

The Islamic Sharia-based banks are also gaining deposits in notable volumes as people prefer keeping funds in such banks, said Anis, also a former chairman of the Association of Bankers Bangladesh.

Encouraged by the trend, a number of traditional banks have already converted them into Sharia-based ones to attain higher amounts of deposits, he said.

The well-performing banks are also getting deposits, said Anis, adding, ‘The banks have managed to attain higher public trust by offering competitive products and services to their customers.’

Of the banks holding a substantial amount of deposits, state-owned Sonali Bank, also the oldest bank in the country, was holding 8.56 per cent or Tk 1,15,158 crore of the total deposits in the banking system.

Along with Sonali Bank, Islami Bank Bangladesh Limited was the other bank which was holding more than Tk 1,00,000 crore in deposits.

The amount of deposits in IBBL was Tk 1,07,802 crore, which is 8.01 per cent of the deposits in the banking system as of September.

Besides Sonali and IBBL, 20 other banks were also holding substantial amounts of funds, ranging between 2 per cent to 6 per cent of the banking system deposits.

Anis said that the banks which had failed to attain satisfactory amounts of deposits might be facing problems like financial irregularities, tussle among the board members, lower profitability, and a lower range of products and services, the banker said.

Good products and offers of banks attract customers and subsequently lead the customers to keep deposits in such banks, said Anis.