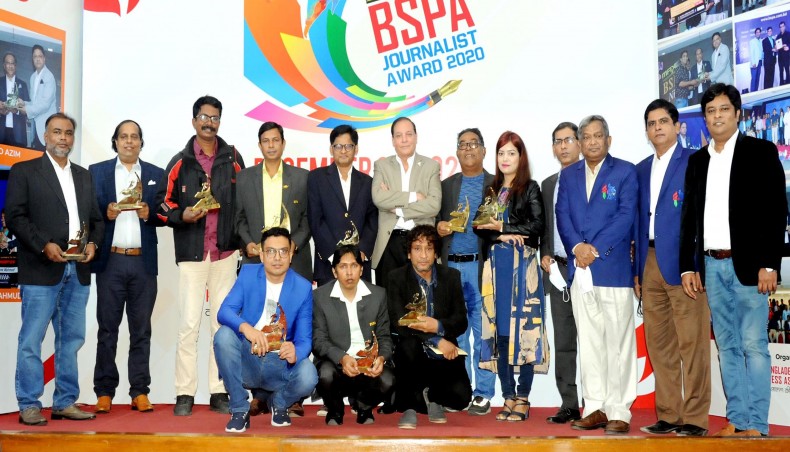 Winners of the MAX-BSPA Journalist Award 2020 pose with their respective trophies at the Bangladesh Olympic Association Auditorium on Tuesday. — Courtesy photo

Max Bangladesh Sports Press Association Journalist Award 2020 was held amid festivity on Tuesday at the Bangladesh Olympic Association’s Dutch-Bangla Auditorium where all the prominent faces of Bangladesh’s sports journalism were present under one roof.

The event was held for the fifth straight year to recognise excellence in the country’s sports journalism and an independent panel of five judges chose the winners, runner-ups and second runner-ups in four different categories.

Daily Samakal senior reporter Mohammad Sekander Ali was named as the sports journalist of the year 2019 and was awarded the ‘Toufiq Aziz Khan Trophy’ while ESPN-Cricinfo’s Bangladesh Correspondent Mohammad Isam won the ‘Ataul Haque Mollick Trophy’ for the best interview of the year.

Veteran sports journalists Mohammad Yusuf Ali and Mahmudul Hasan Shamim were presented with the ‘World Sports Journalism Day’ award for their work in the field.

BOA president Syed Shahed Reza handed out the prizes as the chief guest of the event and BSPA president Sanat Babla presided over the ceremony.