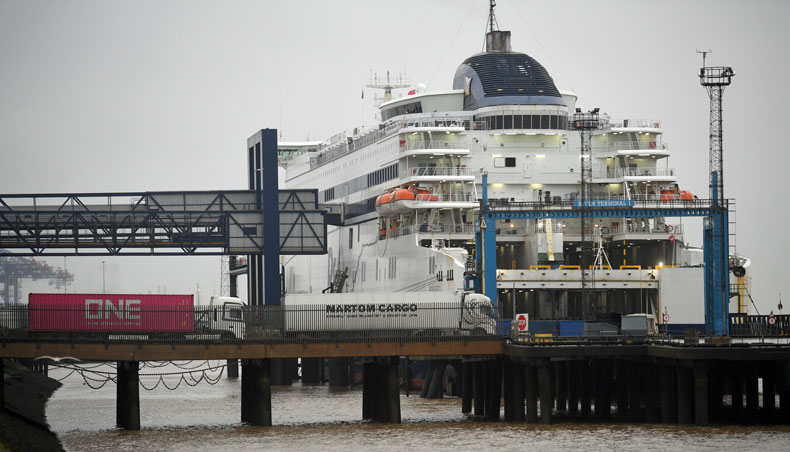 Freight lorries and heavy goods vehicles wait to board a P&O ferry in Hull, north east England, on December 21, 2020, as a string of countries banned travellers arriving from the UK, due to the rapid spread of a more-infectious new coronavirus strain. — AFP photo

Travellers were facing a nightmare holiday season on Monday with governments banning flights from Britain to contain a fast-spreading variant of the coronavirus, as the European Union approved its first vaccine and readied a mass rollout.

More than two dozen countries from India to Argentina suspended flights from the UK offering a bleak reminder that the pandemic was far from over.

‘I’m basically just at their whim as to whichever restrictions they decide to impose. I could literally be trapped here,’ said Shaun Thompson, a Briton who flew to spend time with his wife’s family in Poland – one of the countries to have banned UK flights.

The World Health Organisation’s emergencies chief Michael Ryan tried to temper the alarm by stressing the situation was not ‘out of control’, shortly after a British minister used those exact words to describe the new spread of the new variant.

While experts say there is no evidence the UK variant of the virus — one of several mutations — is more lethal or will affect the impact of vaccines, it may be up to 70 percent more transmissible, according to early data.

Concern over the mutated strain sent European stocks, oil prices and the British pound plunging and transport changes unleashed chaos for travellers and truckers ahead of Christmas.

‘It’s inhuman not to give people more notice. My boyfriend is out in Turkey, I want to get back to him,’ said Beth Gabriel Ware, a 23-year-old Briton who recently came home to visit her parents – but was now among those stuck there longer than intended.

Thousands of people were still dying daily from the virus that had claimed at least 1.69 million lives since it first emerged in China late last year.

British prime ministerBoris Johnson held a crisis meeting after France announced a 48-hour blockade on both people and freight – just as companies were racing to shift merchandise before Britain finally quits EU trade structures on January 1.

Yet Johnson insisted that supply chains were ‘strong and robust’, with delays hitting only a ‘small percentage of food entering the UK’.

‘Everyone can continue to shop,’ he told a news conference.

The UK had already begun to roll out the Pfizer-BioNTech vaccine and the EU will soon follow after formally approving the jab on Monday.

A rollout will begin across the bloc on December 27, EU chief Ursula von der Leyen said in a video statement.

EU regulators earlier noted there was no evidence to suggest the vaccine would not be effective against the new variant.

The United States, which last week began administered Pfizer-BioNTech jabs, on Monday added the Moderna vaccine to its arsenal.

‘I’m excited. I feel privileged,’ said Mandy Delgado, a Connecticut nurse who was among the first to receive a shot.

The UK strain has also been detected in small numbers in Australia, Denmark and the Netherlands, according to the WHO.

Another variant with similar genetic mutations had been linked to widespread transmission in South Africa.

There is currently ‘no evidence to indicate any change in disease severity, but this is also under investigation’, WHO said.

In the pandemic’s first border closure among Scandinavian neighbours, Sweden barred travellers from neighbouring Denmark, in addition to the UK, because of the variant.

Yet Hungary and Slovenia said that they would relax some rules around the holiday to allow families to gather.

While Russia, Spain, India and others joined the list of countries banning flights from the UK on Monday, Australia and the US had held off.

Americans, still suffering the world’s highest death tolls, were bracing for a bit of relief after lawmakers reached a deal Sunday on a nearly $900 billion COVID-19 financial package.

The measure, which Congress was expected to approve on Monday, would include aid for vaccine distribution and logistics, extra jobless benefits of $300 per week, and a new round of $600 stimulus checks.

‘People are going to see this money by the beginning of the next week,’ US treasury secretary Steven Mnuchin said.