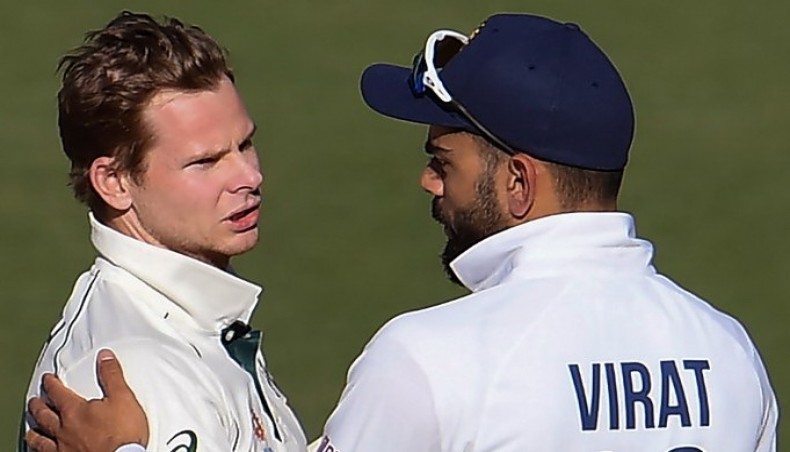 A file photo from December 19, 2020 shows Australia's Steve Smith (L) talking to India's Virat Kohli at the end of their first Test in Adelaide. — AFP photo

International cricket found a way through this year's coronavirus pandemic but the strain of 'bubble life' was evident by the end of 2020.

The women's Twenty20 World Cup, won by Australia in front of a Melbourne crowd of more than 86,000 on March 8, escaped the ravages of Covid-19 but the men's game soon ground to a halt during an Australia-New Zealand series.

In a perfect summary of the topsy-turvy cricket year, India eventually went to Australia and were bowled out for 36 in a humiliating first Test defeat.

After the March lockdown, international cricket, sustained by the broadcast income from tours and tournaments, did not resume again until the England-West Indies Test series in July.

That month also saw the International Cricket Council announce it was postponing this year's men's World Twenty20 in Australia until 2022.

The England-West Indies series, played at the 'bio-secure' venues of Southampton and Manchester, established a template for cricket amid the pandemic and spared the England and Wales Cricket Board, one of the wealthier national governing bodies, from a crippling financial hit.

But the ECB still postponed its new domestic Hundred tournament, a 100 balls per side competition for men and women, while announcing 62 redundancies and pay cuts for players.

West Indies won the first Test but lost the series.

Together with Pakistan, another of world cricket's financially poorer leading sides, the West Indies spent much of 2020 on the road, the two teams travelling to both England and New Zealand.

West Indies captain Jason Holder, who played in another bubble during a lucrative Indian Premier League moved to the United Arab Emirates on health grounds, articulated the stresses of cricket in confinement.

‘Going from bubble to bubble, being isolated in a room, sometimes the room just gets smaller and smaller by the second,’ said Holder following the second of West Indies' two innings defeats in New Zealand earlier this month.

December saw England abandon their tour of South Africa after breaches of their hotel bubble.

Michael Vaughan branded the decision ‘alarming’, with the former England captain writing in the Daily Telegraph: ‘I worry that in future it will only be the rich nations that can put on cricket in bio-secure bubbles.’

But Judge Zak Yacoob, the interim board chairman of Cricket South Africa, criticised ‘an awkward narrative coming out that third-world countries can't manage these things properly’.

England and West Indies took the knee as a response to the global Black Lives Matter protests against racial injustice.

Holder, however, was among those who criticised the ECB for abandoning the gesture during subsequent series against Pakistan and Australia, with Australia opting instead for a 'barefoot circle', in solidarity with Indigenous Australians, at the start of their home season.

November saw the ICC elect a new chairman in Greg Barclay, with the New Zealander questioning the future of a World Test Championship where the inaugural edition's points system had to be altered after several series fell victim to Covid-19.

Pre-pandemic fears that compressed touring schedules skewed the balance too heavily in favour of the home side were highlighted again by India's collapse to their record low total in an eight-wicket defeat by Australia in the first Test at Adelaide on Saturday, albeit fast bowlers Pat Cummins and Josh Hazlewood performed superbly against a side who had made 244 in the first innings.

While Pakistan overcame longstanding security concerns to persuade England, Australia and New Zealand to tour the country in 2021, the year ended with fast bowler Mohammad Amir announcing his international retirement in protest at his ‘shabby’ treatment.

Amir had been one of the most exciting players in world cricket when he was given a five-year ban after being involved in a spot-fixing case during the 2010 Lord's Test.

The highlight of his return came when he took three wickets as Pakistan beat arch-rivals India in the 2017 Champions Trophy final.

Amir's admirers hoped his international retirement would be short-lived, despite the 28-year-old saying he had been ‘mentally tortured’ by team management.

But what sort of global game he might come back to remained to be seen.