Travel bans on Britain for new strain of coronavirus 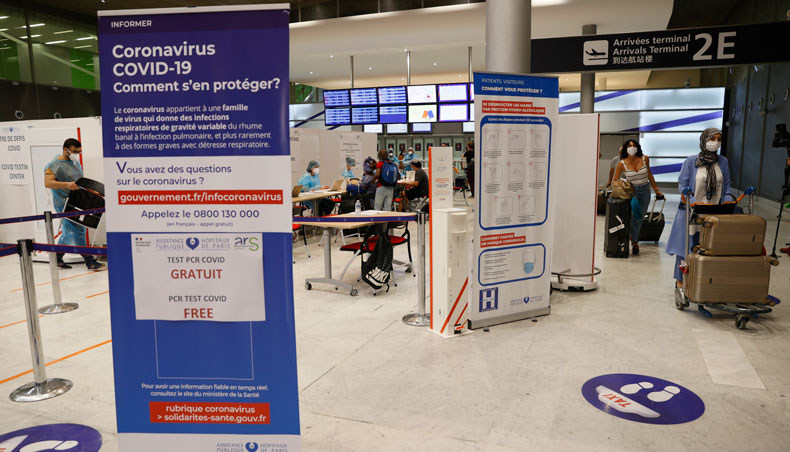 In this file photo taken on July 24, 2020, passengers wearing a face mask arrive in the arrival hall of Roissy-Charles de Gaulle Airport, north of Paris, as a sign for a free COVID-19 test is displayed. — AFP photo

Countries worldwide banned arrivals from the United Kingdom on Sunday over a new highly infectious coronavirus strain Britain said was ‘out of control’, as the World Health Organisation called for stronger containment measures.

But there was positive news across the Atlantic where the United States lawmakers reached a deal for a nearly $900 billion COVID-19 financial package to help struggling Americans.

UK prime ministerBoris Johnson was to chair the COBR emergencies committee on Monday, his office said, after a slew of nations from Turkey to Canada blocked arrivals from Britain by air.

Crucial transit country France moved to block people and goods crossing the Channel, while the Netherlands said that passengers arriving by ferry would be denied entry.

The emergency committee would ‘discuss the situation regarding international travel, in particular the steady flow of freight into and out of the UK,’ a spokesman said.

The ban on all but unaccompanied freight crossing to France came as companies scramble to shift merchandise with days to go until Britain finally quits European Union trade structures in the wake of Brexit.

Late Sunday, Britain’s critical south coast port at Dover said that it was closing to all accompanied freight and passengers due to the French border restrictions ‘until further notice’.

Alarm bells were ringing across Europe — which last week became the first region in the world to pass 500,000 deaths from COVID-19 since the pandemic broke out a year ago — as the new, even more infectious strain of the virus appeared to be raging in parts of Britain.

A WHO spokeswoman told AFP that ‘across Europe, where transmission is intense and widespread, countries need to redouble their control and prevention approaches.’

A German government source said that restrictions on air travel from Britain could be adopted by the entire 27-member EU and that countries were also discussing a joint response over sea, road and rail links.

Later Sunday, bans on flights from Britain were being implemented in the Americas, including by Canada, Chile and Argentina.

US officials however signalled they were holding off on the move for now.

Despite growing concerns about the new strain, EU experts believe it will not impact the effectiveness of existing vaccines, Germany’s health minister Jens Spahn said.

Johnson said that the infectiousness of the new strain had forced him into locking down much of England over the Christmas period.

‘Unfortunately the new strain was out of control. We have got to get it under control,’ UK health secretary Matt Hancock told Sky News after Johnson abandoned plans to ease containment measures over the festive season.

Scientists first discovered the new variant — which they believedwas 70 percent more transmissible — in a patient in September. And Public Health England notified the government on Friday when modelling revealed its full seriousness.

The novel coronavirus has killed more than 1.68 million people since the outbreak emerged in China last December, according to a tally from official sources compiled by AFP.

And with the onset of colder winter weather in the northern hemisphere, when respiratory diseases flourish, countries were bracing for new waves of COVID-19 with tighter restrictions, despite the economic damage such lockdowns wrought earlier this year.

The Netherlands was under a five-week lockdown until mid-January with schools and all non-essential shops closed.

Italy also announced a new regime of restrictions until January 6 that included limits on people leaving their homes more than once a day, closing non-essential shops, bars and restaurants and curbs on regional travel.

In the US, the $900 billion package agreed on Sunday was expected to include aid for vaccine distribution and logistics, extra jobless benefits of $300 per week, and a new round of $600 stimulus checks.

Congress was expected to soon approve the measure as the country coped with the world’s highest death toll from the virus.

‘With the horrifying acceleration of daily infections and deaths, there is no time to waste,’democratic housespeaker Nancy Pelosi and senate minority leader Chuck Schumer said in a joint statement.

Around the world, the rapid rollout of vaccinations was now seen as the only effective way to end the crisis and the economically devastating shutdowns used to halt its spread.

Europe was expected to start a massive vaccination campaign after Christmas following the United States and Britain, which had begun giving jabs with an approved Pfizer-BioNTech shot, one of several leading candidates.

A US expert panel recommended on Sunday that those aged 75 and older should be the next vaccinated against the virus, along with 30 million ‘frontline essential workers,’ including teachers, grocery store employees and police.

Initial doses had focused on frontline health-care workers and the elderly in nursing homes.

Russia and China had also started giving out jabs with their own domestically produced vaccines.

Canada’s prime ministerJustin Trudeau said that he would receive the vaccine publicly when his age group’s turn comes.

And Algeria’s president AbdelmajidTebboune said that the country would launch vaccinations in January – although the North African nation had yet to pick which of the shots on offer it will deploy.