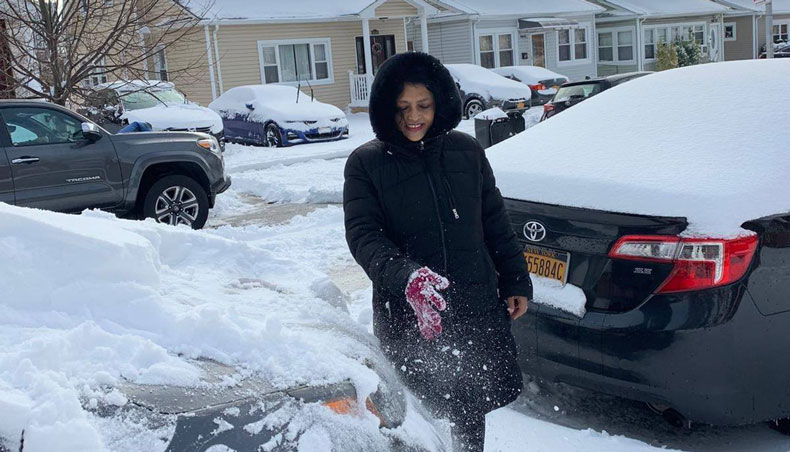 Children skipped online classes to sled and adults glided on cross-country skis Thursday as New York's heaviest snowfall in years brought some relief from the coronavirus pandemic but piled more misery on restaurants and businesses.

New Yorkers, used to staring at the same scenes outside their windows during this year's shutdown, woke to something new to look at: a blanket of the white from a major winter storm.

‘It's nice to have this bit of a winter wonderland amid the doldrums of staying at home,’ said Marlowe Johnson, pushing his two young daughters on a sled down a small hill in Central Park.

‘They've grown accustomed to their Zoom classes for school and sitting at home and being on the computer, so actually coming out into nature for a moment is definitely a lift,’ he added.

The snowstorm hit the US east coast late Wednesday, leaving more than 60 million people under bad weather warnings from Maine to South Carolina, forcing the cancellation of hundreds of flights, and causing thousands of power outages.

The ‘nor-easter,’ which also brought wind gusts of up to 70 mph (113 kmh), caused havoc on roads along the eastern seaboard and was linked to hundreds of accidents and at least six deaths.

Meteorologists recorded more than 40 inches of snow in some areas including Binghamton, situated 180 miles (290 kilometres) north of New York City, and Litchfield in Pennsylvania.

The Big Apple received much smaller amounts, with the National Weather Service measuring ten inches of snowfall in Central Park.

New York Mayor Bill de Blasio said it was still the city's highest level of snowfall in 24 hours since January 2016 when more than two feet fell.

Across New York, people threw snowballs and took selfies as plows cleared roads and doormen shoveled snow from outside buildings.

‘They were very excited to get up. They jumped out of bed and put on their snow suits before I had my coffee,’ Johnson said of his daughters, aged seven and five.

‘We had to come out. We're actually skipping school now just to have the moment outside,’ he added.

Judson Potter, 54, said the snow had brought ‘a lot of joy,’ as he took a break from skiing across a field in Central Park.

‘I gotta go back to my apartment and do a Zoom call like everybody else but first I wanted to get out while the snow was still fresh,’ he added.

People also rushed to Times Square, where they built snowmen and had snowball fights as the area's famous costumed characters, including Elmo and Batman, welcomed a rare opportunity in 2020 to make some tips.

But the weather warning closed outdoor dining at the city's beleaguered restaurants, which were already banned from serving customers indoors due to social distancing rules.

‘It's the latest blow,’ said Fnu Dedy, the 38-year-old manager of a Japanese restaurant on the Upper West Side.

‘It's been a very difficult year already and now we have to wait again before being allowed to reopen,’ he told AFP.