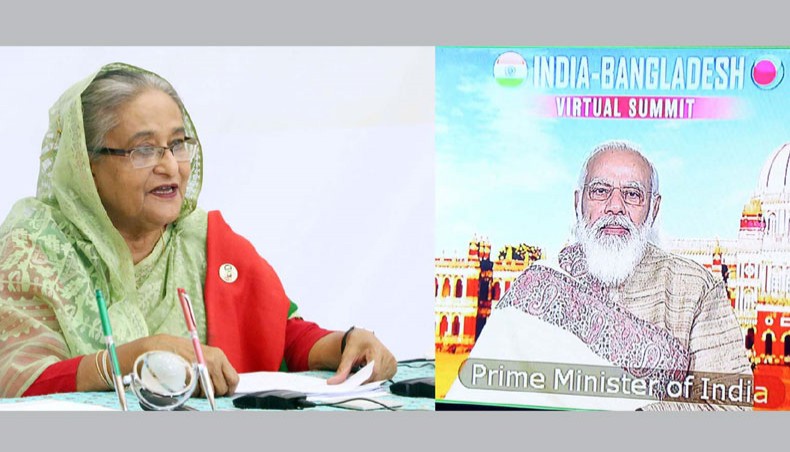 Bangladesh and India were once again back to square one in resolving the protracted disputes over sharing of several common rivers, including the Teesta, after they discussed on Thursday issues ranging from demarcation of borders along rivers, border fencing, killings along the borders by India’s BSF, barriers to trade and transhipment for India.

Prime minister Sheikh Hasina and her Indian counterpart Narendra Modi, from Dhaka and New Delhi respectively, led their sides in the talks virtually held for over one hour starting at 11.30am.

The two sides signed seven instruments on the occasion. These are: a framework of understanding on cooperation in hydrocarbon sector, a memorandum of understanding on cooperation in the field of agriculture, an MoU on Indian grant assistance for the  implementation of high-impact community development projects through local bodies and other public sector institutions, an MoU on supply of equipment and improvement of the solid waste disposal ground at Lamchori for the Barishal City Corporation, a protocol on trans-boundary elephant conservation,  a terms of reference for the India-Bangladesh CEOs forum, an MoU between Father of the Nation Bangabandhu Sheikh Mujibur Rahman Memorial Museum in Dhaka of Bangladesh and the National Museum in New Delhi of India.

In the talks, prime minister Sheikh Hasina highlighted the need for an early signing of an interim agreement for sharing of Teesta waters, as agreed upon by both the governments in 2011, according to the 39-point joint statement released from the two capitals after the summit.

Modi reiterated the ‘sincere commitment and continued efforts’ of the Indian government in that regard.

The two leaders underscored the need for an early conclusion of a framework for the interim agreement on sharing of waters of six common rivers, namely Manu, Muhuri, Khowai, Gumti, Dharla and Dudhkumar.

Bangladesh requested India to inform its border authorities concerned to allow it to excavate the remaining portion of Rahimpur Khal for the utilisation of Kushiyara waters for irrigation purposes.  India was also requested to provide an early concurrence on the proposed MoU to be signed between the two countries for monitoring the withdrawal of waters from the Kushiyara by both sides, pending the signing of the instrument on sharing of waters of the river.

The two leaders stressed that the next round of meeting of the water secretaries of the two countries should be held at the earliest.

The issues involving the Teesta, Manu, Muhuri, Khowai, Gumti, Dharla and Dudhkumar rivers have been on the agenda in all summit meetings of prime minister Hasina and her successive Indian counterparts Manmohan Singh and Modi held in 2010, 2011, 2015, 2017, 2019 and 2020.

The two sides also agreed to hold an early meeting of the Joint Boundary Conference to prepare new maps of strips along the stretches of the Icchamati, Kalindi, Raimongol and Hariabhanga rivers with a view to finalising the delineation of the boundaries as fixed.

It was also agreed to carry out the necessary work to convert the international boundary along the Kuhsiyara into a fixed boundary.

India assured that it would consider a request from Bangladesh for a 1.3 km ‘innocent passage’ through the river route of the Padma along Rajshahi district.

There was no mention in the joint statement about finalising the map of the strip along the Muhur in Feni district.

However, foreign minister AK Abdul Momen, who briefed journalists after the talks, claimed that the strip map involving Muhurir Char was finalised earlier.

The two prime ministers agreed to facilitate the completion of border fencing, as sought by India, in all pending sectors along the international border between the two countries at the earliest starting with the border with Tripura.

Both leaders also agreed that loss of civilian lives along the border was a matter of concern and directed the border forces concerned to enhance the coordination to work towards bringing down border deaths to zero.

Foreign minister Momen said at the briefing that the Border Security Force was provoked to open fire as some Bangladesh people, involved in illegal activities, crossed the border with arms creating risks for Indian border guards.

Both sides noted with satisfaction the recent stepped-up efforts of the two border forces against smuggling of arms, narcotics and fake currencies and trafficking, particularly of women and children.

The two sides emphasised simplifying the people-to-people movement between the two countries as the ‘Bangladesh side requested’ an early implementation of India’s commitment to remove the remaining restrictions on entry to and exit from land ports in India for Bangladeshis travelling on valid documents in a phased manner, starting with checkpoints at Akhaura (Tripura) and Ghojadanga (West Bengal).

Both prime ministers emphasised addressing issues of non-tariff barriers and trade facilitation, including port restrictions, procedural bottlenecks and quarantine restrictions, so that both countries could take full advantage of the SAFTA flexibilities.

Bangladesh sought advance information about potential amendments in the export-import policy of India involving essential commodities as such changes, in many cases, influenced the domestic market of Bangladesh. The Indian side took note of this request.

The two PMs directed the officials responsible to expeditiously conclude the ongoing joint study on the prospects of entering into a bilateral Comprehensive Economic Partnership Agreement (CEPA).

The Bangladesh side emphasised an expeditious conclusion of the consultations on anti-dumping and anti-circumvention duties imposed by India on export of jute products from Bangladesh, and the Indian side expressed hope in this regard.

Both leaders agreed to expeditiously operationalise trans-shipment of Indian goods through the Chattogram and Mongla ports, and an early operationalisation of the BBIN Motor Vehicles Agreement through expeditious signing of an enabling MoU for Bangladesh, India and Nepal to commence the movement of goods and passengers, with a provision for Bhutan to join it at a later date.

Prime minister Sheikh Hasina expressed keen interest in the ongoing India-Myanmar-Thailand trilateral highway project and sought support of India for enabling Bangladesh to connect to this project with a view to enhancing connectivity between the South and Southeast Asia regions.

‘In the same spirit’, according to the joint statement, the Indian side requested Bangladesh to allow connectivity from Hilli in West Bengal to Mahendraganj of Meghalaya through Bangladesh.

Both sides agreed to expedite the implementation of the power sector projects, including the India-Bangladesh Friendship Pipeline and the Maitree Super Thermal Power projects, as well as other projects in the sector.

Sheikh Hasina expressed Bangladesh’s expectation of India assisting in the repatriation of the forcibly displaced 1.1 million Rohingyas back to Myanmar, as both PMs reiterated the importance of their safe, speedy and sustainable return to Rakhine.

India reiterated its request to Bangladesh for at least one land port with a minimal negative list between the neighbouring states of India and Bangladesh, starting with Agartala-Akhaura.

The Bangladesh side proposed that Bangladeshi trucks should avail of the Feni Bridge, once completed, for the transportation of goods from the Chattogram port to the north-east of India.

Both sides emphasised active operationalisation of the mechanisms for an early implementation of projects under the Indian lines of credit.

Narendra Modi assured Sheikh Hasina that COVID-19 vaccines would be made available to Bangladesh ‘as and when produced’ in India.

The two PMs jointly inaugurated the newly-restored railway link between Chilahati in Bangladesh and Haldibari in India.  The route would be initially used for carrying goods, according to foreign minister Momen.

They also inaugurated the projects on beautification of Rajshahi city and construction of Khalishpur Collegiate Girl’s School in Khulna.

In a separate briefing to a small group of journalists, Indian high commissioner in Bangladesh Vikram Doraiswami hoped that the implementation of the projects under the LOCs would be expedited before the next visit of Modi in a few months.

Modi is highly likely to physically visit Bangladesh in March 2021.

Vikram said that relocation of Rohingya people from Cox’s Bazar to the Bhasan Char island was justified from Bangladesh’s perspectives, according to sources familiar with the briefing.

The Indian PM also requested Bangladesh to join the BRICS Bank, established by Brazil, Russia, India, China and South Africa, and the Bangladesh PM was positive on the matter, said the high commissioner.

Relevant ministers and secretaries of the two countries were in the delegations from both sides in the talks.