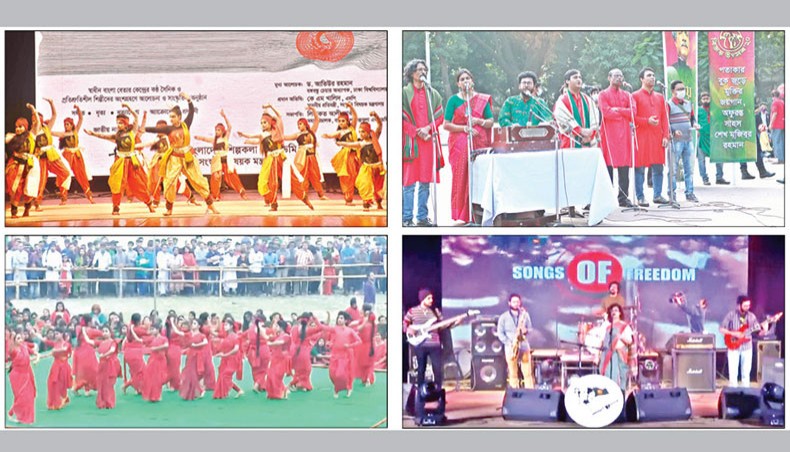 Bangladesh Shilpakala Academy arranged a cultural show at National Memorial in Savar in the morning.

Bangladesh National Museum arranged a three-day programme at its Sufia Kamal Auditorium from December 14 to 16. A discussion and recitation show was held at the venue on Wednesday. It was streamed live on Facebook.

Bangla Academy streamed a live programme on its Facebook page marking the Martyred Intellectuals Day and Victory Day on Thursday.

Bangla Academy director general Habibullah Siraji delivered the welcome speech at the event, which was presided over by the academy’s president Professor Shamsuzzaman Khan.

Thespian Ramendu Majumdar read a written statement at the programme, which was presided over by SSJ president Ghulam Quddus and anchored by SSJ’s general secretary Hasan Arif.

Cultural organisation Chhayanaut celebrated Victory Day through an online programme titled Amader Ei Pataka. The event featured songs and recitation. It was streamed live on the Facebook Page and YouTube channel of the organisation.

Former cultural affairs minister and trustee of Liberation War Museum Asaduzzaman Noor delivered the welcome speech at the event, which was hosted by Rafiqul Islam.

Bangladesh Abritti Samannay Parishad, an umbrella organisation of recitation troupes, has organised a three-day recitation programme marking the day. The programme, which commenced on Wednesday, is being streamed live on the organisation’s Facebook page.