42pc RMG workers do not get  stimulus benefits: TIB survey 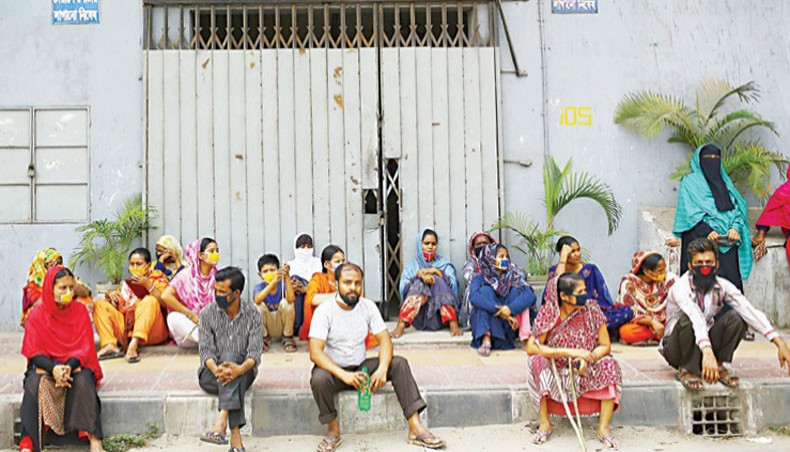 A file photo shows workers protesting against non-payment of wages in front of a readymade garment factory in the capital on April 16. About 14 lakh or 42 per cent of workers in the country’s readymade garment sector did not get benefits from the stimulus package provided by the government to pay the workers’ wages amid the COVID-19 outbreak, according to a survey conducted by the Transparency International Bangladesh.— New Age photo

About 14 lakh or 42 per cent of workers in the country’s readymade garment sector did not get benefits from the stimulus package provided by the government to pay the workers’ wages amid the COVID-19 outbreak, according to a survey conducted by the Transparency International Bangladesh.

According to the survey report titled ‘RMG sector in COVID-19 crisis: Governance Challenges and Way Forward’ released through a virtual event on Thursday, Tk 62,879.71 crore was allocated for the  RMG sector as loans and financial supports by the government, development partners, countries and buyers to face the COVID-19 fallout.

It showed that 98.57 per cent or around Tk 61,980 crore of the total incentives was provided by the Bangladesh government and only 16 per cent of the government fund was allocated for the workers’ wages while the rest 84 per cent of the incentive was paid to address business interests of factory owners.

The report found that the amount for the workers’ wages was Tk 9,188 crore, which was 27.6 per cent less than the requirement and about 42.02 per cent of the 33 lakh workers working in the RMG sector did not receive any support from the allocation.

The anti-corruption watchdog observed that in some cases, large factory owners allegedly used political influence and lobbying for getting incentives.

Replying to a question, TIB executive director Iftekharuzzaman said that RMG factory owners were politically influential and their influences were active in making both the decision on the allocation and the disbursement.

‘Only 16 per cent of the incentive has been allocated for the workers while 84 per cent to the interest of the factory owners. But it should be reversed,’ he said.

Iftekharuzzaman said that it was disappointing that factory owners were unwilling to recognise the high contribution of workers to the RMG sector.

‘Factory owners are holding the mentality that it is enough for them to employ many people,’ he said.

Terming the government incentive discriminatory, Iftekharuzzaman said that the RMG sector contributed 10 per cent to the country’s economy whereas nearly 50 per cent of the total incentive was allocated to the sector.

Like factory owners, apparel brands and buyers ignored the health safety of workers and failed to maintain ethical practice in business amid the COVID-19 outbreak, he said.

According to the study, in April, the Department of Inspection for Factory and Establishment sent a letter to the owners’ organisations and ministries to stop factory lay-offs and workers’ dismissal.

In reality, the instruction was not followed in many cases and as of September, 1,904 factories, including 348 factories under the Bangladesh Garment Manufacturers and Exporters Association, were declared lay-off and about 60,000 to 65,000 workers were dismissed, it said.

There were allegations that 21,000 workers in 64 incentive receiving factories had not received their wages and allowances due to announcements of factory lay-off and the dismissal of workers at the onset of the COVID-19 crisis, it said.

The study found that there were no guidelines for sub-contracting factories, which created an uncertainty over the salaries and allowances of about 15 lakh workers of around 3,000 factories.

The TIB observed that about 10 lakh potential beneficiaries have not yet received social security assistances from the fund provided by the European Union and Germany due to negligence and lack of interest on the part of the government and the employers’ organisations in compiling the list of workers who lost their income due to the COVID-19.

It observed that the RMG sector is still dependent on incentives and the sector has not yet developed its own capacity to deal with crises like COVID-19.

The study recommended amending the section 18 and section 20 of the Bangladesh Labour Act, 2006 in view of the COVID-19 outbreak, to include the provision of job security for all classes of workers.

BGMEA president Rubana Huq termed the TIB report unacceptable and said that there were obscurities in most points of the report.

‘It appears in the report that the TIB is out to label allegations against the BGMEA but none of the allegations is justified,’ Rubana said.

She said that the TIB in its 35-page report used words like many times, often, almost, estimated and there were much vagueness in the report.