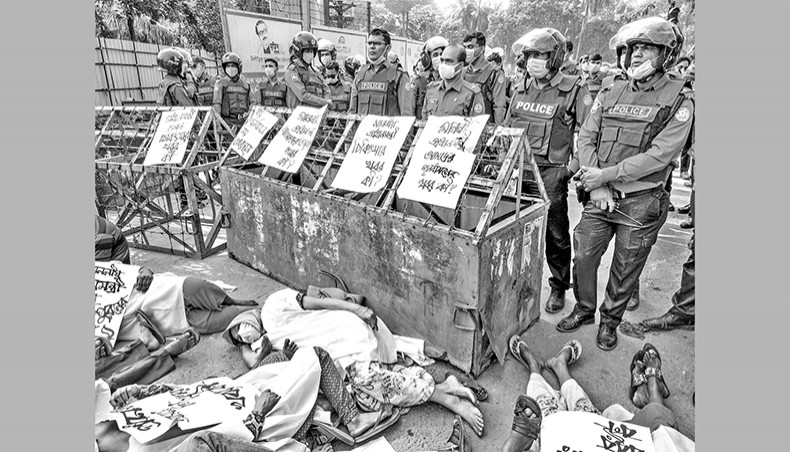 I entered the giant graveyard. It was quiet except for my own footsteps but, in my head, I could hear the screams. Rows of blackened sewing machines, still in orderly lines, reinforced the sense that I was looking at tombstones. There were no flowers here. No epitaphs. No mourners.

A fire had raged through the Tazreen Fashions garment factory in Ashulia on 24 November 2012. Workers stationed on the building’s third and fourth floors had rushed to the exits, only to find them locked, a regular practice in many Bangladeshi garment factories. Fires and worker deaths were, sadly, all-too-common. The owners justified the locking of the doors as a ‘security measure’ but workers were effectively prisoners during working hours. As the heat and smoke built up, the panic-stricken labourers, who were unable to break down the iron gates, rushed to the windows and somehow managed to remove the metal grills. It was a long way down, but one by one they jumped. Some screamed with pain as they fell; others were silent. Each landed with a dull thud, their bodies crumpled on the uneven ground below. Possible death was still a better choice than certain death. And some did survive.

The Tazreen Fashions fire — the deadliest in the nation’s history — appeared in a newsfeed on my connecting flight to Istanbul. Arriving in Dhaka two days later, I drove straight to the factory. The shell of the building was eerily empty; ghostlike. I recognised the smell of burnt flesh. Turning my camera to vertical mode, I took  several overlapping images, panning over the gritty landscape of the burnt-out floor. The Photoshop technique of auto-stitching, which blends adjacent images into a single seamless panorama, had not yet arrived in Bangladesh, nor had the AI algorithms that would make such stitching easier. I shot in RAW to ensure I could capture the extreme range of tones created by the charred skeleton of the building, and the sunlight leaking in through the broken windows. The crunch of burnt debris under my shoes echoed across the empty factory as I neared its exit. Not sure it could carry my weight, I walked gingerly down the blackened staircase. Light streamed through the bare openings. I saw the white scratch marks on the wall where the charcoal had been wiped away, made by those trying to escape.

I wondered if the marks were those of Jorina khala — one of the survivors I have come to know. She, too, had eventually jumped. The impact of her fall had damaged her spine permanently, but she’d survived — although she often says she might have been better-off dead. In total, 119 people died in the fire and more than 50 were seriously injured. Several have since passed away.

Yet, while court proceedings into the tragedy began on October 1, 2015 the case still drags on. Unbelievable as it may sound, the government has yet to appoint a public prosecutor. On November 7, 2019 the government failed to produce witnesses. On January 30, 2020 the judge was absent. On March 31, there was a mandatory suspension due to COVID-19. On October 15, the judge was absent again. The next hearing is scheduled for January 13, 2021. Based on how things have gone over the past eight years, the outcome is unlikely to be different.

For more than two months, Jorina and other seriously injured workers, still traumatised from the accident, had been camping out on the pavement outside the National Press Club to demand justice. Over the years, a group of us has sought to offer support to the survivors by providing counselling, legal advice, court representation and photographic documentation. Our aim is to give them hope, without raising false expectations.

I was there on Tuesday 24 November, the eighth anniversary of the disaster, when survivors dressed as ‘living corpses’ marched from their vigil at the National Press Club to Gonobhobon, the prime minister’s official residence. They had three demands: lifetime compensation, respectable and realistic rehabilitation, and long-term treatment for injured workers. They had marched less than 100 metres before the police stopped them. Unable to counter the helmeted gang, the workers lay down in front of their barricade. ‘We’re going to die anyway, so let’s die here,’ I heard someone say.

It was then that I spotted one of the ubiquitous stencils of Bangabandhu Sheikh Mujibur Rahman, whose face peers out from almost every hoarding and sign in Bangladesh. Mujib is presented as a deity by the current regime. Like the rest of us, he had failings, but criticism of him is banned, the official history deemed sacrosanct. He was also one of the country’s most accessible leaders. Stories of his stepping out onto the veranda of his house, at Dhanmondi Road 32, in a lungi and vest, might not have been protocol for a head of government meeting the public, but was typical of Mujib. It was this disarming openness that added to his charisma and endeared him to the nation.

Mujib’s image has become propaganda and to show him disrespect is now considered sedition. Yet the stencilled face of Mujib watching helplessly as the fascist regime his party has become, suppressing injured and impoverished garment workers, is an image that requires no explanation for a Bangladeshi.

December is our month of victory, but there is little for the workers to celebrate. Earlier this month the police arrived at night, beat up the workers and drove them away. Mujib’s daughter now leads the party her father shaped, but it has morphed into a rather different entity. A party of the super-rich, for the super-rich, it pays little heed to workers with legitimate demands. While his stencilled face may have been bound to remain impassive, faced with this sight, the real Mujib would probably have shed a tear.

Shahidul Alam is a writer, curator and choreographer.