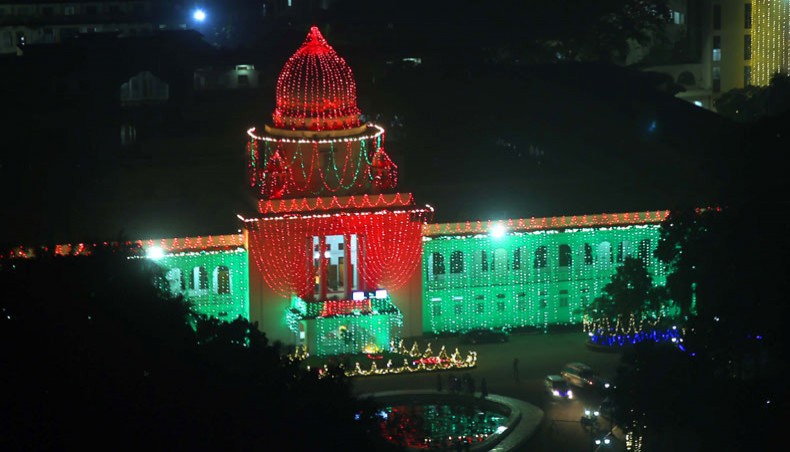 The Supreme Court building is illuminated with twinkle lights on the occasion of Victory Day. The photo was taken on Tuesday. — Sony Ramany

The nation celebrates the 50th Victory Day today recalling the heroic freedom fighters, who made their supreme sacrifices to free the country from the Pakistani occupation forces.

There would be no outdoor celebrations this year due to the coronavirus outbreak.

Home minister Asaduzzaman Khan at a recent press conference on the preparation of the Victory Day celebration said that there would be no event in open spaces on the occasion of Victory Day on December 16 this year owing to the COVID-19 situation.

‘Indoor programmes could be held by following health guidelines,’ he said at an inter-ministerial virtual meeting on Victory Day security measures.

Liberation war affairs secretary Tapan Kanti Ghosh told New Age that all preparations have been taken to allow people to the National Memorial at Savar following the necessary health guidelines.

He said that the ministry cancelled this year’s Victory Day parade for the COVID-19 outbreak.

The ministry took the decision after getting the approval of prime minister Sheikh Hasina for cancelling the parade at the National Parade Ground in Dhaka, he said.

People will visit the National Memorial at Savar and other memorials across the country to pay tribute to the martyrs of 1971, who sacrificed their lives for the nation.

Political parties, socio-cultural and professional organisations as well as educational institutions have taken elaborate programmes mostly in virtual platforms to mark the day.

According to the authorities, the national flag would be hoisted in all government,  semi-government, autonomous and private buildings as Victory Day is a public holiday.

The day would be welcomed with 31 gun salutes at sunrise in the capital, districts and upazilas.

‘Adequate security measures will be arranged to ensure security to foreign diplomats visiting the national memorial. The entire memorial area will be under the coverage of CCTV cameras,’ home minister said.

He said that special prayers would be offered at mosques, temples, churches and pagodas across the country, seeking eternal peace for the departed souls of the martyred and the peace and prosperity of the nation.

On Victory Day, improved diet will also be served in prisons, hospitals, old homes and orphanages across the country, he said.

Kamal said that medical teams and fire service personnel would be engaged in various programmes.

On the night of March 25, 1971, the Pakistani occupation forces launched a brutal onslaught on the Bengalis and committed genocide on the unsuspecting, unarmed people.

The War of Independence was preceded by 23 years of intense political struggle for democracy and national identity.

The Pakistani armed forces and its local collaborators committed one of history’s worst genocides in Bangladesh killing countless unarmed Bengalis during the nine-month-long war.

The Jamaat-e-Islami and a host of other political parties opposed the country’s independence and collaborated with the Pakistan junta.

In his video speech, president Md Abdul Hamid on Tuesday spoke about institutionalising the country’s democracy and developing a culture of absolute tolerance and mutual respect so that the benefits of independence reach at the doorsteps of the people.

‘Democracy must be institutionalised,’ he said in the recorded video speech from Bangabhaban and added that all-out cooperation as well as a positive change in people’s mind-set is mandatory to lend impetus to the country’s ongoing development trend.

‘After overcoming many ups and downs,’ he said, ‘a democratic government has been established in the country at present.’

Addressing the nation on the occasion of Victory Day, prime minister Sheikh Hasina said that the defeated forces of 1971 were recently seen active in the political arena trying to confuse the religiously inclined Muslims through false, fabricated and fictitious information as they want to create anarchy in society.

‘In 1972, the father of the nation had said not to turn religion into a political instrument. But the associates of the defeated forces are now dreaming of pushing the country backward, to return to the state it was 50 years back,’ Hasina said.

Fakhrul in his message said that independence was the best yield of the past century and that the freedom fighters fought for independence envisaging a happy and prosperous Bangladesh by establishing democracy and ensuring economic emancipation.

He urged people to be united in a movement to free BNP chairperson Khaleda Zia, who is now under house arrest.

On behalf of president Md Abdul Hamid and prime minister Sheikh Hasina, rich tributes will be paid to the martyrs of the liberation war by placing wreaths at the national memorial at Savar at dawn.

The freedom fighters and their family members will then pay their tributes led by liberation war affairs minister AKM Mozammel Haque.

After that, foreign diplomats, leaders of different political and social organisations, institutions and people from all walks of life will pay their tributes to the martyrs.

Important buildings will be illuminated and the national flag will be flown atop these buildings.

Newspapers will bring out special supplements and television channels and radio stations will air special programmes.

The ruling Awami League has taken programmes, including placing of wreaths at National Martyrs’ Memorial, at the portrait of the country’s founding president Sheikh Mujibur Rahman at Bangabandhu Bhaban in the capital’s Dhanmondi and at the mausoleum of Mujib at Tungipara this morning.

The Dhaka University authorities, Teacher-Student Centre, and all socio-cultural organisations have chalked out various events to mark the day.

The programmes included hoisting of the national flag, placing wreaths at the national memorial at Savar, film and photo exhibitions and cultural programmes as well as special prayers.

Jahangirnagar University has also chalked out various programmes marking the day following necessary precautions this year due to the spread of COVID-19.

The Liberation War Museum and Naripakkha organised two separate virtual discussions at their Facebook pages on Tuesday night in memory of the freedom fighters who sacrificed their lives.

Bangla Academy is scheduled to hold a discussion today and another on Thursday.

The government has tightened security in the capital and across the country to avoid any untoward incident.