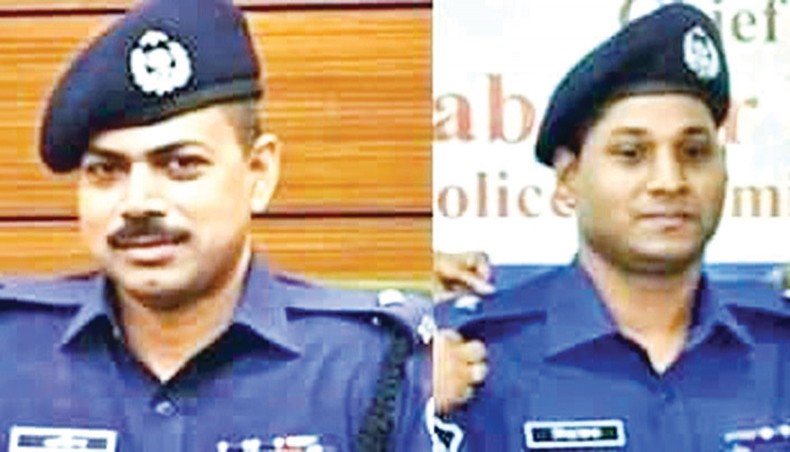 The Rapid Action Battalion on Sunday submitted their charge sheet naming 15 suspects as accused in the case over the killing of retired army major Sinha Md Rashed Khan in Cox’s Bazar in July, stating that then officer-in-charge of Teknaf police station Pradeep Kumar Das had plotted the murder nearly two weeks ago.

RAB director (legal and media wing) Lieutenant Colonel Ashique Billah was speaking on the charge sheet at a crowded press conference at the elite force’s sub-office at Karwanbazar in the capital.

The RAB spokesperson   said that the three villagers were police informers and took part in the murder plot against Sinha.

Of the 15 suspects, Sagar Dev remains absconding while the rest are in jail in Cox’s Bazar and Chattogram.  All the policemen were suspended following their arrest.

Ashique said that Pradeep, along with inspector Liyakat Ali and the three police informers, conspired to kill the retired major as he and his team had collected ‘sensitive’ information about the crime haven of Pradeep.

He said that they also found corroborative evidence in support of their finding that the motive of the killing was basically to supress the information obtained by Sinha and his team during the work on a documentary in Cox’s Bazar since July 7.

The 26-page charge sheet that named a total of 83 prosecution witnesses was submitted to the Cox’s Bazar senior judicial magistrate court of Tamanna Farah by senior assistant superintendent Khairul Islam, of RAB-15, who led the investigation.

Within 130 days of the killing Khairul submitted the charge sheet to the court at around 10:30am accusing 15 suspects of involvement in the murder and of abetting the crime, said district court public prosecutor Faridul Alam.

He said that the court accepted the charge sheet and would send it for trial of the case at the sessions judge court.

Sinha, 36, who took early retirement from the Bangladesh Army in November 2018, was shot dead at a police checkpoint on Cox’s Bazar–Teknaf Marine Drive at Shamlapur on July 31.

Sinha’s sister Sharmin Shahriar Ferdous on August 5 filed a complaint with the Cox’s Bazar judicial magistrate court, accusing nine policemen of the killing, which ordered the Teknaf police station to record a murder case against the police officials.

Of the nine accused named in the first information report by the sister, the RAB dropped two names as their identities could not be confirmed.

The Sinha shooting incident triggered protests in many quarters, with the number of so-called gunfights plummeting since August.

While the case investigation was going on, the police headquarters replaced all the police officers and members from Cox’s Bazar district.

Pradeep and Liyakat were arrested after they surrendered to a court on August 6 along with four other colleagues in connection with the case.

The RAB investigation team has eventually arrested 14 suspects, including 11 policemen, of whom three witnessed the shooting incident, and the three villagers.

Sinha’s sister Sharmin told New Age that she was satisfied with the charge sheet over the complex murder incident, which she said identified the actual perpetrators.

‘We want the actual offenders to be brought to justice but at the same time we also want that no innocent should be punished,’ she added.

In the press conference, the RAB spokesman said that there were three more cases filed following the shooting death, and the final reports in those cases had already been submitted to court by the RAB investigators, seeking dropping of the charges against Shipra Debnath and Shahidul Islam Shefat, Sinha’s team members working in Cox’s Bazar until his death.

Shipra and Shefat were arrested in the cases filed with Teknaf and Ramu police stations.

Ashique said that inspector Pradeep had turned the Teknaf area into a netherworld and used the government gun in their criminal activities.

As slain major Sinha and team members detected some of the police officer’s criminal activities and approached Teknaf police station for his comment on their documentation in mid-July, Pradeep threatened them with dire consequences, and plotted with others to eliminate them, the RAB spokesperson said.

Both Pradeep and Liyakat were in a crisis of their existence following the documentation, the RAB official added.

The RAB spokesperson claimed that they had evidence in support of their charge but they could not be able to collect the CCTV footage of the visit of Sinha and his colleagues to the police station due to technical glitch.

He said that the charges against the 15 suspects were specified, with Pradeep and Liyakat shown to be directly involved in the killing and sub-inspector Nanda Dulal and others trying to divert the incident.

Rubel Sharma, 30, who served under Pradeep was with him when he reached the spot about half an hour after the retired major was shot dead by Liyakat at the checkpoint.

He claimed that the then Cox’s Bazar police superintendent, ABM Masud Hossain, who was later transferred to Rajshahi, was indifferent to the criminal activities of Pradeep despite having knowledge of them, adding that the charge sheet recommended departmental proceedings against him.

Ashique further said that the shooting death of Sinha was not as similar to the killing of Teknaf municipality councillor Ekramul Haque in May 2018.

Ekramul, an upazila leader of the ruling Awami League, was killed in a ‘gunfight’ with the RAB during an anti-narcotics drive in Cox’s Bazar in that month, sparking a nationwide outcry.

The court on the day also rejected a revision application challenging the capacity of Sharmin to file the case against the policemen.