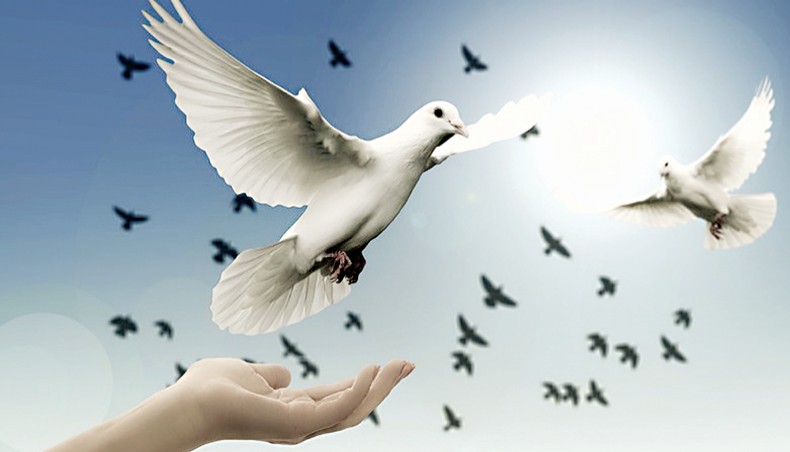 THERE are said to be around 30 armed conflicts currently taking place in the world, some large, some small, all deadly. The warring factions of today are more likely to be insurgent groups — ‘rebels’ (sometimes fighting proxy wars for a regional or global power) or terrorists, extremists — right and left, battling with a federal army or police force — than nation squaring up to nation.

Research shows that less people are dying in such clashes than at any time in history. This is positive, of course, but the number of deaths isn’t really the issue, although clearly less is better. What’s important is to unearth the reasons for violence, to create a world in which the causes of conflict are removed and allow peace, that long held ideal, to be realised.

In addition to armed battles, societies everywhere are violent, dangerous places in varying degrees, as are many personal relationships and homes. Then there is the vandalism mankind is inflicting on the natural world, on intricate ecosystems, on plant and animal species, on the air, the waterways and the earth itself. Although this form of abuse may appear separate from uniformed killings, stabbings or roadside bombs, it flows from the same destructive source — human consciousness and behaviour.

Humanity appears to be incapable of living together in peace, or in harmony with the other kingdoms in nature; our long past is punctuated and in many ways shaped by war, by death, destruction and suffering, and by wholesale vandalism and exploitation, of one another, of groups that are militarily or technologically weaker, and of the environment.

Some argue that human beings are inherently brutal, others that we are conditioned into violence. This is the reductive nature versus nurture debate; a conversation that centres around the degree to which each aspect influences and colours the behaviour of the individual: is humanity (or a specific individual) inherently violent and abusive, for example, or is such behaviour the result of conditioning, the way we are raised, nurtured, the type of atmosphere we are exposed to, the prominent values and modes of living that are promoted and unconsciously absorbed?

While people’s natures vary and we are all unique individuals — different yet the same — within each and every human being the potential for tremendous good exists (routinely demonstrated in times of need), as does the propensity towards great cruelty, to which some appear more at risk than others. The environment in which an individual lives, the conditioning factors he/she is exposed to, the values and beliefs, all influence the extent to which one or other innate tendency is expressed and or comes to dominate.

Although some forms of conditioning are more damaging than others, all conditioning inhibits, divides, and creates a false sense of self and a distorted view of others. Conditioning into competition, into tribalism/nationalism and adherence to any ideology — religious, political, economic — constructs a barrier, fuelling division, facilitating violence; that which is inherent, the seed of the good, is stifled, consigned to the margins, merely an alarming echo, the voice of conscience. As a result of the current socio-economic system, which has found its way into all aspects of life, including education and health care, such conditioning is widespread.

It is a socially unjust model, a violent system founded on ideals that agitate the negative and breed violence. Competition, ambition, greed and desire are promoted, in fact, they are essential for its survival; nationalism, via the agency of competition, encouraged. All perpetuate and strengthen separation, dividing humanity, one from another, and where division exists — within the individual and/or within society — conflict is inevitable.

Under the doctrine of greed everything and everyone is seen as a commodity, a consumer of relative value, or an obstacle to enrichment of some kind (indigenous people living in the Amazon rain forest for example), something or someone that can be used and profited from, and when drained of value, discarded. Inequality of all kinds, wealth, income, opportunity, influence, is built into its mechanics, which grind the goodness out of all but the strongest; social justice denied, injustice ensured.

Social injustice is a form of mass violence, perpetrated by the architects and devotees of the system, all of whom have profited well and are determined to maintain the cruel status quo and remain in power for as long as possible. Given the level of injustice, particularly between the rich global north and impoverished south (albeit with pockets of enormous wealth), it is surprising that riots don’t break out all the time. There is resentment and anger among people everywhere, but physical exhaustion, economic insecurity; fear and a conditioned sense of guilt and inadequacy coalesce to inhibit action.

THE concept of peace has been held in our collective consciousness for at least two thousand years, probably longer. Peace between nations, peace within countries and regions, peace in our communities, longed for by people everywhere and routinely promised by politicians and leaders of all colours, while they invest in the machinery of war, trade in arms and follow the ideology of conflict. Hollow hypocritical words uttered without intent like a mechanically recited prayer, and so (for the most part), like other noble constructs, peace has remained an ideal. And believing in the ideal alone, the conditions for its realisation have not been created, systems that ensure conflict are maintained, and so, inevitably violence has erupted, again and again and again.

Despite this fact, and contrary to our history of brutality and cruelty, peace and harmony are the natural order of life. They are aspects of life that are eternally present — like the sun, which even when obscured by cloud or darkness remains in the heavens. All that is required is that the obstacles to their manifestation be identified and removed.

The principle obstruction is division, followed by selfishness and greed. The notion that we are separate from one another, from the environment and from that which we call God; divisions based on tribal/nation affiliations, ideologies of all kinds (including religions), race and or ethnicity; inequality and social injustice in its myriad forms. Greed and the focus on material wealth, and with it political influence, is itself divisive and has led to the violent exploitation of people (the slave trade being perhaps the greatest and most abhorrent example) and the natural world.

In order to rid the world of violence an understanding and rejection of those modes of living that create environments of conflict and fuel discord is needed; a shift in consciousness away from selfishness, greed and tribalism; and recognition that humanity is one. We are living in extraordinary times, transitional times, and such a realignment is well under way; there is a growing awareness that if humanity is to overcome the issues of the day and save the planet we must come together, cooperate and share. In the pursuit of peace sharing is essential, for without it there can never be social justice, and social justice is critical in creating trust and community harmony.

Together with justice and freedom, peace is no longer simply a dormant ideal, a cherished aspiration. It is a living force flowing through the hearts of men and women throughout the world, inspiring collective action, demanding change and an end to all forms of violence. It’s time for humanity to come of age, to reject all that divides us, to unite and create a space in which peace and harmony can ring out across the world.

DissidentVoice.org, December 11. Graham Peebles is an independent writer and charity worker. He set up The Create Trust in 2005 and has run education projects in India, Sri Lanka, Palestine and Ethiopia where he lived for two years working with street children, under 18 commercial sex workers, and conducting teacher training programmes.