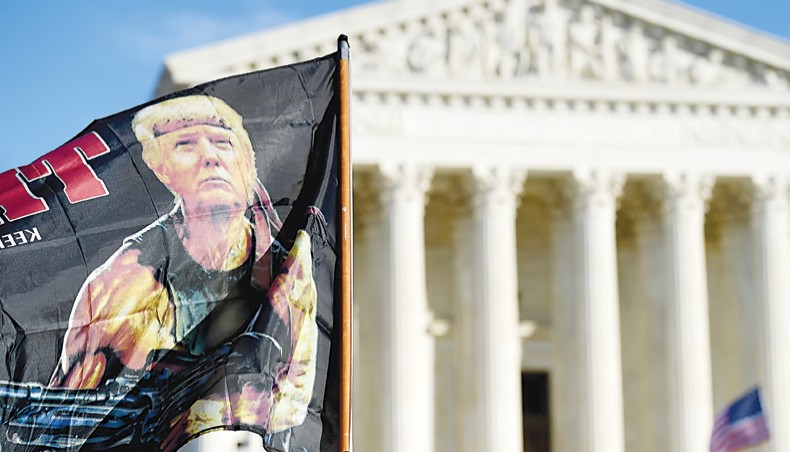 Supporters of US president Donald Trump participate in the ‘Million MAGA March’ to protest the outcome of the 2020 presidential election in front of the US Supreme Court on December 12 in Washington, DC. — Agence France-Presse/Olivier Douliery

THE last-ditch attempt of Donald Trump, the president of the United States or POTUS, to overturn his electoral defeat through the supreme court of the United States or SCOTUS before the 538 electoral college electors representing the 50 states and the District of Columbia meet on December 14 in their respective states/territory to vote and seal his fate, has failed. SCOTUS dismissed the case 9–0 that sought to disenfranchise millions of voters in the four swing states of Pennsylvania, Georgia, Michigan and Wisconsin to allow the Republican-dominated legislatures there to elect new slates of pro-Trump electors of the electoral college to give POTUS a second term.

POTUS took up the case before SCOTUS filed by Ken Paxton, the attorney general of Texas as his lifeline to a second term and a litmus test of loyalty to him of the Republican leadership. Seventeen Republican attornies general in the states and 126 Republicans in the House of Representatives had lent their names to Rex Patton’s case to get on the right side of POTUS. POTUS himself also filed a motion to SCOTUS to join the Texas attorney general’s bid to undo president-elect Joe Biden’s electoral victory. The judges at SCOTUS would have to take leave of their sanity to please the president because the case of the Texas attorney general had zero merit.

POTUS made the case’s chances of even getting a hearing at SCOTUS absurd by the way he tweeted and spoke to the media about the judges. He called the zero on merit case ‘the big one’ and assured his base that his path to the second term was on the cusp of opening up. He teased and taunted the sixconservative judges at SCOTUS to show courage and patriotism to enter the history books for helping Americans win back an election that the Democrats were trying to ‘steal’ when the vast majority of Americans knew that the reverse was palpably true. The worst part of the way POTUS championed the case was the manner in which he referred to the court’s six conservative judges, particularly the three he nominated like they are in his employment and they were obliged to carry out his wishes and demands.

SCOTUS, thus, dismissed Rex Patton’s case which was in reality POTUS’s case without even the consideration of a hearing. The judges used the technical path to dismiss the case 9–0 arguing that Texas had ‘no cognisable interest’ in how elections are conducted in other states. Earlier, SCOTUS had dismissed 9–0 another election-related case filed by Republicans in Pennsylvania with simply one word ‘denied’, underscoring contempt that POTUS and his men were in denial over the fact that many dozens of court cases by the president’s lawyers were dismissed at the federal courts because there was simply no evidence to consider them, let alone judge in favour of POTUS. Many of these judges were Republican, some appointed by POTUS.

SCOTUS’s latest ruling will be the end of the line for POTUS. The electoral college will meet next Monday. There are no more obstacles for vice-president Joe Biden to be legally elected as the 46th president of the United States. Nevertheless, POTUS has shown no inclination to concede. He has expressed disappointment, criticism and contempt at the six conservative judges at SCOTUS for their lack of courage following the latest SCOTUS ruling. He has also tweeted that the fight would go on, leaving many to guess about what could be up the president’s sleeves to carry out his attempts to derail the United States’s democracy because what he is now seeking is what the worst third-world dictators buried in the graveyard of his history would have done to remain in power. He promised during his soon-to-end term that he was interested in creating a world of an alternative reality; he is paving the passage to live in one soon.

The result of the votes of the electoral college, after they are cast next Monday, will be sent to the Congress on December 23. The Congress will meet in a joint session at 1:00pm on January 6 and count the votes cast by the electoral college and announce the winner to pave the way for the inauguration of vice-president Joe Biden as the next POTUS on January 20, 2021. The event in Congress on January 6 has historically been a mundane tabulating event and little else. Nevertheless, POTUS and Rudy Giuliani see in the January 6 event a big and last opportunity for reversing the election in president Trump’s favour because, under the constitution, members of the Congress can raise objections in the January 6 event, tabulating and certifying the results of the electoral college state by state.

Some of POTUS’s bullied members of Congress may, to please him, use the constitutional opportunity to derail the process of counting in the joint session of Congress. Nevertheless, given the present realities in Congress, such an attempt would be futile. Republicans at the joint session may raise an objection that must be in writing and signed by at least one senator and one representative. If the Republicans do so on January 6, the House and the Senate will then vote on the objection. If they split, as they are bound to given that the Republicans control the Senate and the Democrats the House, the objection will automatically fail and the electoral votes would then counted as originally cast that will give vice-president Joe Biden 306 electoral votes and POTUS 232. Ironically, it will then be vice-president Mike Pence’s constitutional duty as the leader of the Senate to announce vice-president Joe Biden as the next president of the United States to conclude the joint session.

SCOTUS’s latest ruling has, thus, cast the die on President Trump’s Hail Mary attempts to derail the elections and, in effect, American democracy. He has nevertheless dug enough dirt to raise many serious questions about the future of the country’s politics. One, Trump has exposed that there are tens of millions of Americans willing to follow him even in his life as a former president like a cult leader who has shown that they are the antithesis of American democracy and democratic beliefs. Another, 88 per cent of the Republicans in Congress, after every bit of doubts have been removed from the November 3 elections in which 161 million Americans voted freely, have still not accepted vice-president Joe Biden as the president-elect. They fear that if they do so, Trump would send his cult followers and supporters or 70 per cent of the 74 million who voted for him, after them to damage their political ambitions.

The president-elect Joe Biden is, meanwhile, confidently going about the business of transition with the legal hassles now behind him. The great American nightmare that POTUS scripted, acted in it in the lead role and directed too, is now firmly on course to end on January 20. The effects of the damage that POTUS has inflicted on the United States’s democracy may, however, take a long time to heal with many saner Republicans fearing that POTUS has taken the party to the edge of destruction.

Postscript: POTUS has lost yet another court case since the one in SCOTUS, his losses now nearing 60, this time in a federal court in Wisconsin. The loss is no longer a piece of news because it does not matter any more. Someone who hates losing on big issues and small has now become the biggest loser in US history.