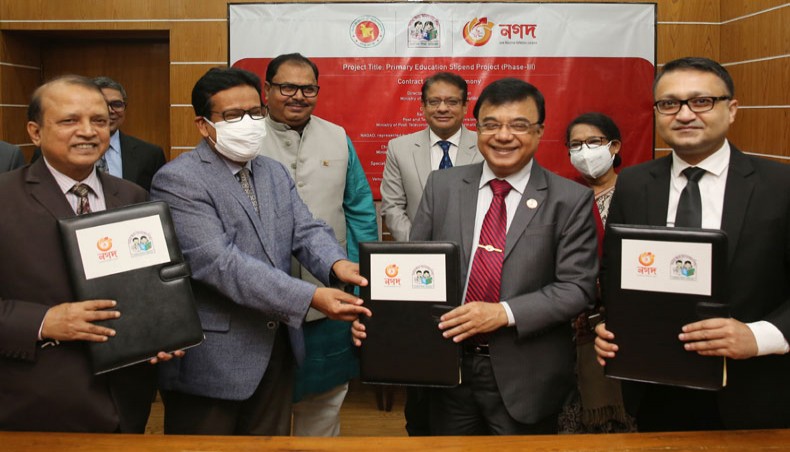 Attendants pose for a photo session at a tripartite agreement signing ceremony among the Department of Primary Education, Bangladesh Postal Department and Third Wave Technology Limited at the secretariat in Dhaka on Sunday. — Press Release Photo

The government is set to distribute stipends and allowances for accessories among 1.30 crore primary school students through the Postal Department’s digital financial service Nagad.

To this end, the Department of Primary Education on Sunday signed a tripartite agreement with Bangladesh Postal Department and Third Wave Technology Limited to eliminate the hassles that the students and their guardians have been facing in receiving the funds in the last few years, said a press release.

Directorate of Primary Education director general Alamgir Muhammad Mansurul Alam, Bangladesh Postal Department director general (additional charge) Md Siraz Uddin and Nagad executive director Md Shafayet Alam inked the agreement on behalf of their respective sides at a ceremony at the Ministry of Primary and Mass Education at the secretariat in the city.

Earlier, the government had to spend a total of Tk 21.50 per thousand in cash-out charges and data management, whereas Nagad will charge Tk 7.50 for every thousand. Besides, the recipients will get the full amount of cash-out charges from Nagad along with the stipend and allowances amount.