World urged to move on ‘climate emergency’ after pandemic 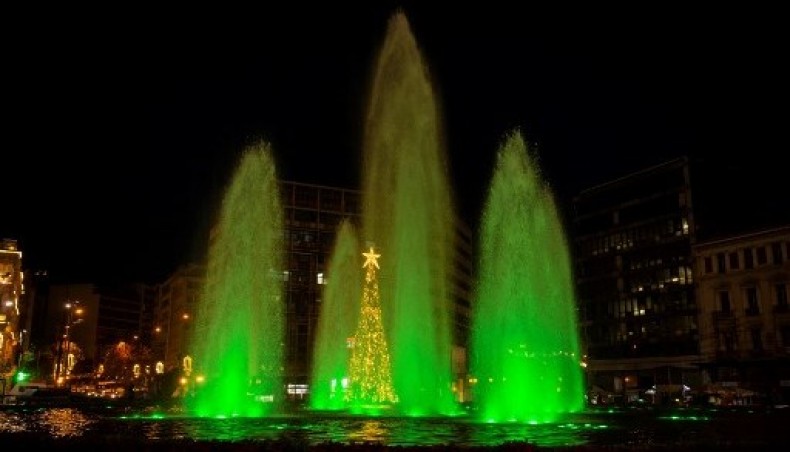 This photo taken on December 12, 2020 shows a fountain illuminated with green light at the Omonoia square in central Athens, to mark the 5th anniversary of the Paris climate accord.- AFP photo

The United Nations on Saturday urged leaders to declare a global climate emergency and shape greener growth after the coronavirus pandemic, as nations took gloomy stock five years since the landmark Paris Agreement.

In the dying days of Donald Trump’s administration, the US government was one notable absentee after abandoning the Paris pact.

But president-elect Joe Biden issued a statement arguing there was ‘no time to waste’, as he prepared to embrace the deal anew and to host his own climate summit within 100 days of taking office next month.

Nations not invited by the organisers included Brazil and Australia, which both stand accused of ignoring the crisis under their right-wing governments in the build-up to the UN’s next major climate summit next year, COP26, in the Scottish city of Glasgow.

Commitments made in Paris in 2015 were already ‘far from enough’ to limit temperature rises to 1.5 degrees Celsius, UN secretary-general UN chief Antonio Guterres said in his opening address to the summit, which was co-hosted by Britain and France.

‘If we don’t change course, we may be headed for a catastrophic temperature rise of more than 3.0 degrees this century,’ he said.

‘That is why today, I call on all leaders worldwide to declare a State of Climate Emergency in their countries until carbon neutrality is reached,’ he added, arguing the recovery from COVID-19 presented a rare opportunity to recalibrate growth.

British prime ministerBoris Johnson told the summit that ‘the promethean power of our invention’ was yielding vaccines against the disease, and should be unleashed too for the climate.

Heading into the summit, Johnson committed to ending all direct UK support for the fossil-fuel sector overseas. And he had presented plans for a ‘green industrial revolution’ creating up to 250,000 jobs, especially in renewable energy.

‘We are doing this not because we are hair-shirt-wearing, tree-hugging, mung-bean-munching eco freaks,’ he told the summit, adding, ‘We are doing it because we know that scientific advances will allow us, collectively as humanity, to save our planet and create millions of high-skilled jobs as we recover from COVID.’

Israel and Pakistan vowed to phase out coal-fired power plants. But while India touted its green credentials, there was little new in the way of action from a country that is battling increasingly erratic weather patterns and air pollution.

President Xi Jinping said that China would work to reduce the intensity of its emissions by 65 percent by 2030, compared with 2005 levels.

He promised to ‘aim to peak carbon dioxide emissions before 2030’, repeating a pledge he made in September, when the world’s second-largest economy said it would achieve net-zero emissions by 2060.

But Xi reiterated China’s view that while it was still developing economically, richer countries should step up more.

Smaller countries attending the online summit included Honduras and Guatemala, which were hit last month by a pair of monster hurricanes.

Maldives president Ibrahim Mohamed Solih, whose low-lying country could be wiped out by rising seas in the Indian Ocean, said,‘The Maldives will do all that it can to address the climate emergency.

‘We call on the international community to do the same,’ he said, noting that rich countries had been promising more technical and financial help ‘over many decades’.

In his own message, Pope Francis stressed that both the pandemic and climate change ‘weigh most heavily upon the lives of the poor and vulnerable’.

More than 110 countries had committed to becoming carbon neutral by 2050.

The deadline for this is December 31.

‘The Climate Ambition Summit lacked real ambition. World leaders must step up in the next 12 critical months to pull the world back from the brink of catastrophic climate change,’ he said.

There were few new commitments on short-term emissions cuts, and little on help from richer countries to poorer ones to help them adapt to climate change and decarbonise their economies.

‘We must not stumble from Covid-19 disaster into climate calamity,’ Gore said.