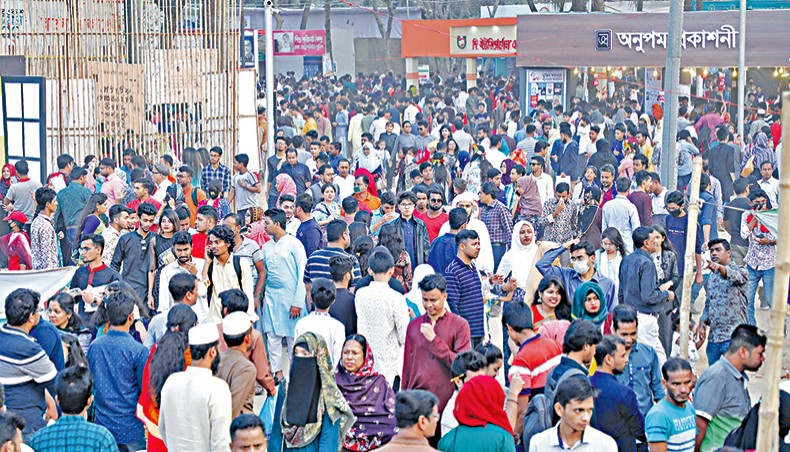 Bangla Academy is considering holding the Amar Ekushey Book Fair virtually while the publishers are against the move and demanding that the book fair be held following health directives at the venue due to the COVID-19 crisis.

Jalal Ahmed, Bangla Academy director and member secretary of the fair organising committee said, ‘We have taken a decision  to suspend the physical book fair in 2021 and hold a virtual book fair at an executive council meeting held on Thursday. We will inform the cultural affairs ministry of our decision on Sunday.’

‘If the COVID-19 situation improves, we will arrange the fair physically at a later date in 2021. Bangla Academy director general will talk to the press regarding this matter on Sunday evening,’ Jalal Ahmed added.

Leading publishers opposed the move and expressed their concern over Bangla Academy’s decision.

Academic and Creative Publisher’s Association of Bangladesh president and the owner of Somoy Prakashan Farid Ahmed said, ‘We have not received any official notice from Bangla Academy stating that the fair would be organised virtually. We are not in the favour of participating in a virtual book fair. We want the academy to organise a physical book fair following health directives. The academy should take the decision after discussing with publishers.’

‘I hope that the decision regarding the fair should not be taken until the first week of January. Winter will end in the middle of February and we hope that the COVID-19 situation will improve then. We will talk to the media on Sunday at 12:00noon at Bangla Academy after discussing with the director general of the academy. We will discuss with Bangla Academy to formulate a plan about organising the book fair in this time of crisis,’ Farid Ahmed added.

Academic and Creative Publisher’s Association of Bangladesh senior vice-president Milan Kanti Nath, also the publisher of Anupam Prakashani, said, ‘Bangla Academy didn’t inform us that they would organise the book fair virtually. I think that a virtual book fair cannot be an alternative to a physical Amar Ekushey Book Fair. Anyone can organise a virtual book fair nowadays.’

Monirul Hoque, publisher of Ananya Prakashani, said, ‘We are living in an era dominated by internet. We have seen that the fairs which were arranged virtually across the globe amid the COVID-19 crisis weren’t successful. So a virtual Amar Ekushey Book Fair won’t be an effective event. The book fair should be held physically maintaining social distancing and health directives.’

Ittadi Grantho Prokash publisher Johirul Abedin Jewel said, ‘We want the book fair to happen. However, it will be risky to hold it amid the COVID-19 situation. It will be difficult to organise a virtual book fair in a short time. Many publishers are not ready to attend the fair virtually. Bangla Academy has not yet prepared a website. If the book fair takes place, it should be a physical one. If the situation does not improve, we should stop arranging the fair in 2021.’

Holding of the fair on the Bangla Academy premises began informally in 1972, but it became institutionalised in 1978. The fair was named then Amar Ekushey Granthamela and a guideline for it was formulated in 1984.