South Africa were 'too lax' with England 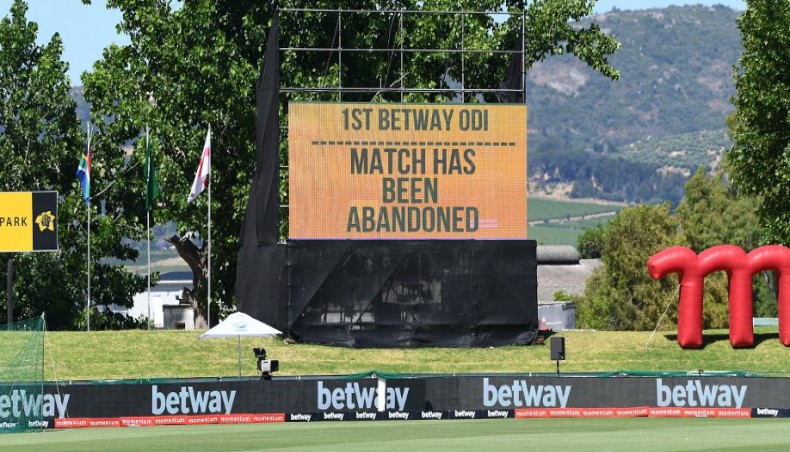 A general view of a screen announcing that the first one-day international match between South Africa and England has been abandoned at Boland Park stadium in Paarl on December 6, 2020. — AFP photo

Cricket South Africa interim board chairman Zak Yacoob said on Thursday he did not want to blame England for the cancellation of their tour but made it clear he felt the decision was unjustified.

‘We think our protocols have been very good,’ he said. ‘Any notion that they (England) went away because of anything that was our fault is completely wrong.’

England's tour was called off on Monday after two members of the touring party initially tested positive for COVID-19.

‘Ultimately they were negative,’ Yacoob said of follow-up tests which were revealed after the decision had been taken to call off the tour.

Yacoob said he believed CSA had been ‘too lax with the English and their desire to do things that they shouldn't be doing.’

He said he did not want to give details but it was reported locally that members of the England party had left their bio-secure environment to play golf on several occasions and also that they had used net facilities at the Newlands ground in Cape Town that were not cleared for use because of COVID-19 restrictions.

England played all three of the scheduled Twenty 20 internationals but none of the three ODIs, the first of which was postponed after a positive test in the South African entourage.

When the tour was halted on Monday, the CSA and the England and Wales Cricket Board said in a joint statement ‘the decision was taken jointly by the two Boards to ensure the mental and physical health and welfare of players from both teams.’

The judge said the curtailed England tour had caused uncertainty about other planned tours, which meant ‘a lot of work’ to convince other boards that touring South Africa was safe would have to be done.

‘Nothing can be absolutely certain but I am 95 percent certain that the tour will go ahead,’ said Yacoob.

Sri Lanka are due to arrive next week for two Test matches, starting in Centurion on December 26.

He was less certain about a scheduled Test tour by Australia in February and March.

Responding to suggestions that Australia had proposed their ‘away’ series against South Africa be relocated to Perth in Western Australia, Yacoob said he expected Australia to act in what they thought was in their best interests in terms of cricket politics.

CSA director of cricket Graeme Smith said there had been no engagement on the tour issue with his Australian counterparts but an operational meeting was planned for next week.