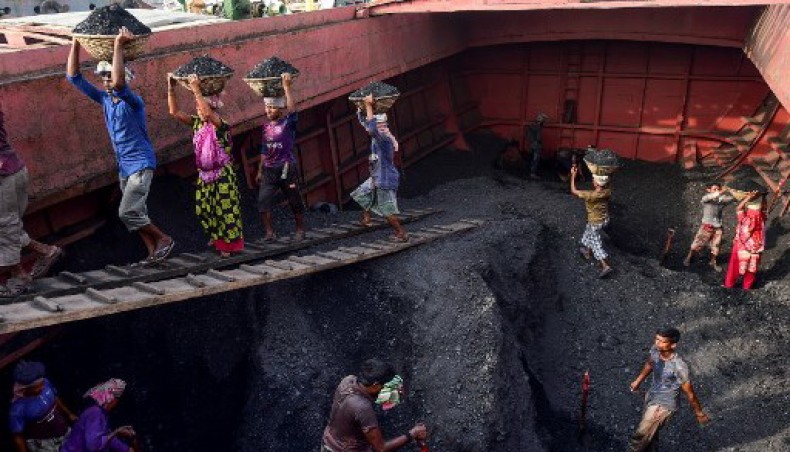 In this file photo taken on November 06, 2019 men an women unload coal from a cargo ship in Gabtoli on the outskirts of Dhaka.-AFP photo

Five years after the signing of the Paris Climate Accord fossil fuels still dominate the energy landscape but it is renewables that are enjoying the strongest growth which even the Covid-19 crisis has not dented.

Solar panels have seen spectacular growth in recent years, climbing from 217 gigawatts of installed capacity worldwide in 2015 to 578 gigawatts last year, according to the International Renewable Energy Agency.

That is more than double Russia's total electricity production capacity in 2015, accord to the CIA's World Factbook.

And while fossil fuels have taken a beating this year, renewables have accounted for nearly 90 percent of new capacity, led by solar and wind power in the United States and China.

The new renewable capacity should hit a record of 200 gigawatts this year, according to the International Energy Agency (IEA).

It forecasts renewables surpassing coal in 2025 to become the top source of electricity production.

‘We haven't seen much of a tapering off for the development for renewable electricity during the crisis and that may be due to the drop in costs, which make it competitive, but also because public support has been maintained,’ Berghmans said.

That support is even being reinforced in certain countries as countries roll out plans to support their economies that include measures to support a transition to clean energy.

Fossil fuels, which emit CO2 among other pollutants, continue to account for the majority in the global energy mix, with oil at the top with a 33 percent share, according to a study by British oil major BP.

Oil and the fuels derived from it continue to play a key role in the transport sector as well as being essential for industrial uses such as the manufacture of plastic.

However the restrictions put in place by governments to slow the spread of the coronavirus hit the transport sector hard, with air travel nearly brought to a halt.

That translated into major drop in demand for fuel, with the IEA estimating demand for crude this year will be down nearly 9 percent.

Prices also took a major hit, with one major contract briefly falling below zero, although they have since recovered to pre-pandemic levels and demand is expected to rebound along with the global economy next year.

Views are divided about the prospects for oil over the medium term. Some experts see demand for oil as having already peaked while OPEC cartel countries see demand continuing to rise thanks to emerging countries.

‘We're at an inflection point,’ said Berghmans, as ‘we can expect major transformations in the transport sector in the coming ten years.’

Electric vehicles are expected to finally make a breakthrough to the mass market as the price of batteries fall and range improves, with tougher pollution regulations in some countries forcing the shift.

But there is a lot of ground to cover as sales of electric vehicles accounted for just 2.6 percent of total sales last year and 1 percent of the overall fleet on the road, according to the IEA.

Coal is the second-most used fuel in the world despite its pernicious effect on air quality and climate change as it remains important in electricity generation.

But it is on a downward trajectory. This year the IEA expects coal use will fall by 7 percent due to the pandemic and that it will never regain the level it was at last year.

Natural gas, which emits less C02 than oil and especially coal is likely to see moderate growth over the medium term, especially from China and India where it could be used to replace coal power stations.

Following the drop in demand this year, the IEA expects average annual growth of 1.5 percent for the 2019-2025 period.