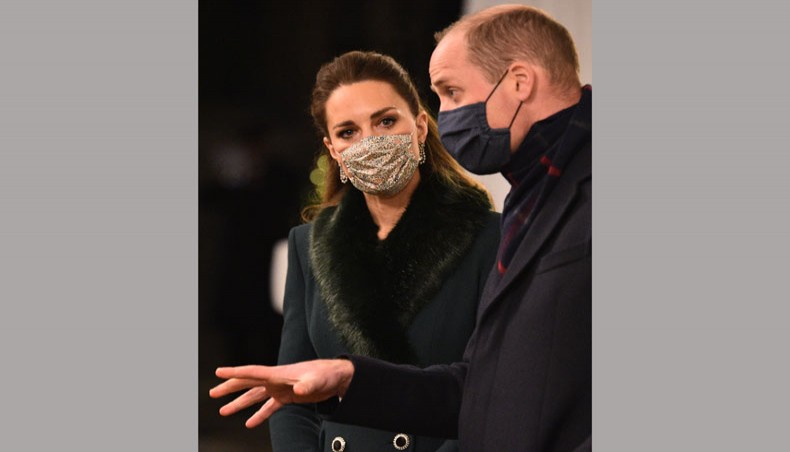 Britain's prince William, Duke of Cambridge, right, and Britain's Catherine, Duchess of Cambridge left, wearing protective face coverings to combat the spread of the coronavirus, attend an event to thank local volunteers and key workers for the work they are doing during the coronavirus pandemic and over Christmas in the quadrangle of Windsor Castle in Windsor, west of London, on December 8, 2020. — AFP

A royal rail tour of Britain by prince William and his wife Kate has caused controversy after criticism from politicians in Scotland and Wales because of coronavirus travel restrictions.

The couple stopped in Cardiff on Tuesday on the second leg of a 1,250-mile tour in the royal train to thank key workers for their efforts during the pandemic.

But before their arrival, Welsh health minister Vaughan Gething told the BBC he would prefer it if ‘no-one was having unnecessary visits’.

That came a day after Scotland’s first minister Nicola Sturgeon appeared to give the couple a cold reception as they stopped off in Edinburgh.

The devolved governments in Wales, Scotland and Northern Ireland are all responsible for health policy and have implemented different restrictions to curb the spread of COVID-19.

That includes curbs on all but essential travel between all four UK countries.

Gething said he was not ‘particularly bothered or interested’ when asked if William and Kate should travel to Wales.

But he added the visit should not be used as an ‘excuse’ for people to say they were ‘confused’ by the current guidelines.

Sturgeon said royal officials had been told about restrictions on crossing the border from England.

‘We made sure that the royal household were aware, as you would expect, of all of the restrictions in place in Scotland,’ she added.

The British government in London has refrained from criticising William, who is Queen Elizabeth II’s grandson and second in line to the throne, and his wife Kate.

Prime minister Boris Johnson’s spokesperson said the trip was ‘obviously a matter for the palace’.

The government had ‘set out clearly’ restrictions to try to stop the spread of the virus and was asking the public to abide by it.