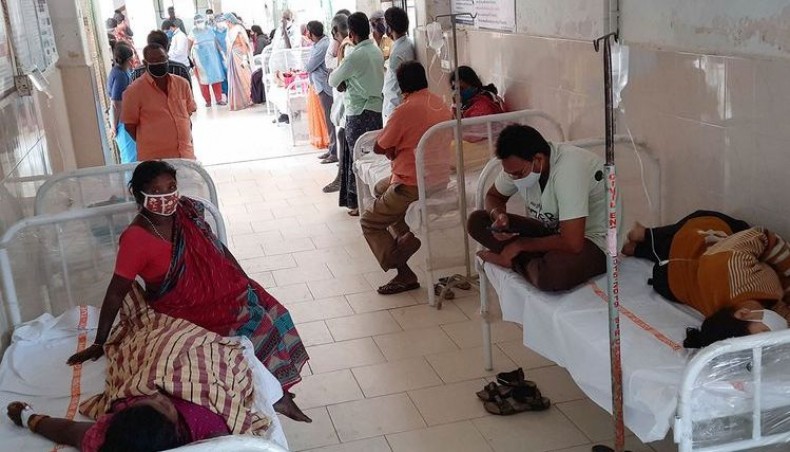 Patients and their bystanders are seen at the district government hospital in Eluru, Andhra Pradesh state, India, on Sunday, December 6, 2020. Over 200 people have been hospitalised due to an unidentified illness in this ancient city. — AFP photo

Hundreds of people have been treated for mystery illness in a southern Indian town, with one doctor ruling out ‘mass hysteria’ at a time nerves are already frayed because of the coronavirus.

Officials said nearly 500 people have been treated — with most swiftly recovering — but the death of a 45-year-old man at the weekend was attributed to the mystery disease.

India is already in grip of coronavirus with the world’s second-highest number of cases — and soon expected to pass 10 million.

‘Some people are saying that it is mass hysteria but it is not,’ said AS Ram, a senior doctor at Eluru government hospital.

He said most victims had suffered genuine symptoms, but ‘we are unable to diagnose what is causing it’.

Other officials pinpointed a possible role of chemical additives in pesticides, while residents have highlighted a problem with garbage and feral pigs.

They released a report on Monday which said symptoms included ‘epilepsy for 3-5 minutes, forgetfulness, anxiety, vomiting, headache and back pain.’

The government has sent doctors from the National Institute of Virology, National Centre for Disease Control and the All India Institute of Medical Sciences have been sent to investigate.

The team was collecting samples of edible oil, rice, blood and urine for analysis.

‘Most of the patients are coming in with minor head injuries or a black eye as they collapsed suddenly with the seizure,’ Ram said.

‘But within one or two hours most of them are fine.’

Police constable Kiran Kumar — who collapsed while on duty Monday —said he had been left ‘scared’ after being semi-conscious for more than two hours.

‘My colleagues told me, I shouted something and collapsed. I injured my right shoulder due to falling on the road.’

According to district officials, the illness is not spread person-to-person.

They released a report on Monday which said symptoms included ‘epilepsy for 3-5 minutes, forgetfulness, anxiety, vomiting, headache and back pain’.