Feminists Across Generations: reclaiming the streets 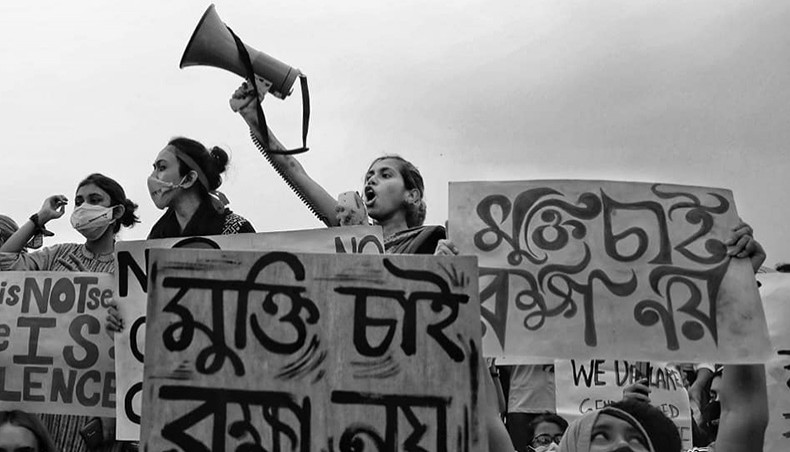 Feminists Across Generations is a recently formed platform has been organising rallies and online discussions particularly to incite rage among people against the rape culture that has normalised sexual violence, writes Nahid Riyasad

‘Feminists Across Generations’ is a platform that was formed within a week in October following the violent rape of a woman in Begumganj, Noakhali. The survivor in this case was not only sexually assaulted and raped, but the event of violence was video-recorded and released on social media. As the video of violence became viral in social media, it justifiably outraged women across generations beyond comprehension and formed the emotional foundation of the solidarity contained in the platform.

The first public event organised by the forum was on October 10, when activists gathered in front of the parliament building in Dhaka with their 10-point demands. From the event, organisers declared gender-based violence a national emergency recognising the fact that the business-as-usual approach to the cause will not bring the expected social changes.

Since the emergence of the platform, it has been organising rallies and online discussions particularly to incite rage among people against the rape culture that has normalised sexual violence. Unsettling the everyday activist conversation on violence against women, the organisers insist that marital rape must be accommodated in our legal definition of rape. There should be room to address the violence that members of the LGBTQ community endure in our society.

However, their primary strategic intervention is against the tendency of the state and society that has normalised rape to the extent that we don’t get angry at the injustices done to women. They are talking about a right to feminine rage, a rather unconventional but significant move that unsettles the stereotypes of women being docile, silent and always a victim.

Saraban Tahura Zaman, a lawyer and an organiser of the platform said, ‘We wanted to show people that we are angry, that we will not take this violence. It is through our shared anger and rage against the violence that we would like to connect with people.’

Ahona Hassan, a lawyer, also active in the platform said, ‘At least 30 people came together instantly, within five-days. We were eager to bring the platform alive; we felt the need to have space. The declaration of the platform was the first big step. We felt the same anger or rage as if women are not supposed to live as a full human being’.

And the platform made its presence felt when they collectively chanted on the streets at night, ‘we don’t want your protection, we want freedom’ (rokkha noy, mukti chai). When the government and the entire social and legal structure is founded on the idea that women need to be protected, their demand for freedom has created a new path, opened a new avenue for the feminist movement in Bangladesh. On that note, Ahona said, ‘We do not need protection and we have to change that narrative. It is our rights that need to be protected.’

The 10-point demands of the platform revolve around rape law reform, social transformation and insist on breaking the taboo on sexuality that exists in our society. It advocates for specific reforms in the perception of rape as the Penal Code 1860 gives a vague definition of rape. The law says that ‘penetration is sufficient to constitute the sexual intercourse necessary to the offence of rape’.

Referring to the Begumganj case Ahona said, ‘we have seen the incident does not comply with the definition but what happened there was a grievous crime and gender-based violence.’ Marital rape is another area where the law fails to recognise the crime. It is a rather unfamiliar term in Bangladesh. The Penal Code 1860 says, ‘Sexual intercourse by a man with his wife, the wife not being under thirteen years of age, is not rape.’ The law simply denies such a crime, if the wife is over thirteen years old. Such legal position refuses to see the unequal power relation within patriarchal marriage.

Our Penal Code is the relics of our colonial history, it needs to be reformed, said Ahona and referred to England, the then colonial state accepted marital rape as a crime in the 1990s. The recent death of a 14-year-old schoolgirl from excessive bleeding as her husband had forced her to have sex with him, raped her and she died from genital injury within a month after her marriage underscores the importance of this particular reform in our law. It shows, as Ahona insists, the importance of familiarising the idea of marital rape to bring a change in the collective psyche that marriage is not a lifelong licence for intercourse and consent is even more important in nuptial life.

Taboo must be broken around marital rape, but it should be broken on the issues of sex and sexuality. The word and idea of sex is still a taboo in Bangladesh this means sex education is not considered as an important aspect of formal education. The organisers of the platform think it is important to include gender inequality, sexuality and reproductive health in schools and colleges to battle the social tendency to blame the victim, to encourage an environment in which families will not tend to protect the rapist, but they will try to make their men accountable.

On the question of sex education, Ahona added, ‘schools play an important role in shaping a human being. As sex is a social taboo, teachers are not comfortable teaching such matters. Also what we get in the name of sex education in the school curriculum is anything but comprehensive. As a result, young people are growing up without the knowledge of consent in relationships.’

Feminists Across Generations is not an exclusive platform for women or feminists but it is an inclusive place for all who have experienced gender-based violence or who identify themselves as a victim/survivor of such crimes.

Moriom Mannan, an activist of the platform said, ‘when we were marching through Dhanmondi, a lot of people from the streets joined us and expressed solidarity. Also, a few from the LGTBQ community have joined the demonstration. During a performance in Mirpur, when the performers chanted “you are the rapist” while making eye contact with the crowd, it made some people in the crowd uncomfortable. I saw a few boys lowered their eyes and stepped back to hide in the crowd. This shows whatever we are doing, we are doing it right because it is making uncomfortable. It is unsettling the status quo.’